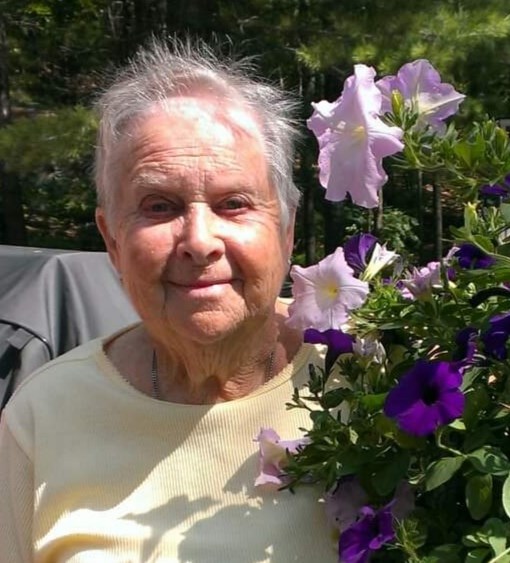 It is with heavy hearts that we announce the passing of Helen Shirley Benard (nee Spears) at HSN on Tuesday April 21, 2020. Our mother, mother in law, Nan, sister, Auntie Honey, Mrs. B., our dear friend and our ever source of entertainment.

Throughout her 91 years, she shared highs and lows but always maintained her determined spirit and whit about her. Born on October 16, 1928 in Halifax, NS to Myrtle (Cooper) and Earl Spears, she grew up as the third of seven children ; predeceased by Selma (Ralph), Margaret (Cliff), Ruth (Louie), Judy (Leo) and Allen, survived by Pearl (Eddie dec.) and sister-in-law Marianne. Spears.

She lived through the second world war working in the Halifax shipyards as a rivet sticker. At the age of 18, she met the love of her life Julien (Jay) (predeceased 1973) and married, beginning their life together and moving to Sudbury in the 50s. She was the special mother to two wonderful children Kim (Russ) Kruitz and Kenny (Tammy) Benard. She was a supportive mother, and friend to her children.

Her true joy in life was her grandchildren, Chris Kruitz, Stephanie (Graham) Pecman and Melanie Benard. The success of her grandchildren and the relationship she had with each one was her greatest pride. An active Nan who loved early morning perch fishing trips, baking pies with fresh blueberries and always ready for a "squeeze, squeeze, squeeze". Her ever light was her great granddaughter Parker Josephine.

She was an enthusiastic east coaster from down home and was lucky to make a final trip there just 2 years ago. She spent the majority of her life in Onaping where she was friends to everyone in her small community. She loved going to camp and will forever be the Queen of Ministic Lake. She continued to truck herself out to camp up until last fall at the age of 91.

She was a respected curler, impressive gardener, member of the United church and lucky fisher woman. She was an avid card player and baker, hosting annual bake sales up in to her 70s. You could never play cards without at least a quarter for a bet. She will be greatly missed at the Golden Age Club in Onaping, especially by her card ladies.

She will be rememberd by her humble and generous community, her large group of friends and neighbours who have become family over the years, niece's, nephews, cousins and everyone who knew her.

We will forever remember her hilarious stories of how to go up a down escalator, of accounts of an air show (which were actually birds) and of trying on dresses backwards and feeling oh so beautiful, to name a few.

If you knew her, you loved her, and that's just how it was!

Celebration of life to follow once the world heals.

In lieu of flowers donations to SickKids or to St. John's United Church Levack, ON.