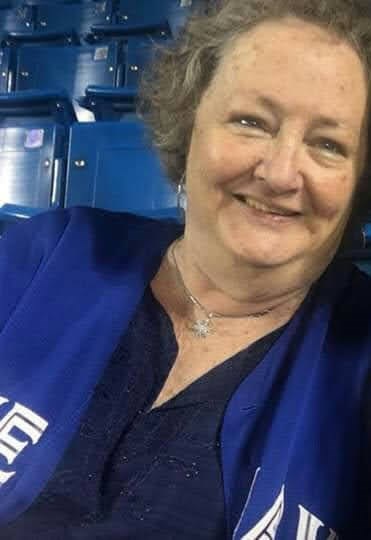 Marion grew up at Pine Falls Lodge in Northern Ontario in a famous wrestling family where resourcefulness and a sharp wit was a way of life, something her family and friends knew well. She was home-schooled until the age of 13. Moved to Sudbury On during the week with Delma and returning to the Lodge on weekends, while attending and graduating Grade 12 at Marymount Academy. Later receiving an Ontario Provincial certificate from the College of Nurses as a Nursing Assistant in June 1978. An avid Toronto Blue Jays fan (and a Kevin Pillar future wife hopeful) she could talk “the Jays” for hours, even proudly spotted on TV and the Jumbotron. She lived and travelled widely and made many friends across the continent. Especially proud of her sister-in-law Joan Hart who is an icon in the beauty pageant world and taking part in her hall of fame induction. She loved and lived life fully and took nothing for granted.

Marion has been cremated and will be laid to rest beside her daughter, Vicky, up on the Bald Rock. A Family Celebration will be held in Northern Ontario at a later date.

A Celebration of Life for her "Toronto Family" will be held in Alliston on Saturday, July 25th 2020. All friends are invited to join Marion's children at the Royal Canadian Legion 111 Dufferin St S. 1:00 - 4:00 p.m. Donations to the Salvation Army or SPCA will be greatly appreciated!