'Without support from other levels of government, without trying to come to some sort of agreement with Air Canada, North Bay could face having to look at closing the airport'
Jul 2, 2020 1:00 PM By: Linda Holmes 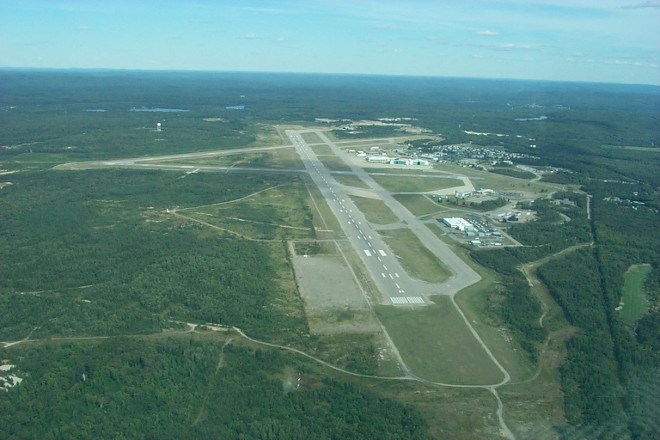 A $5-million renovation to the 5,000-foot crosswind runway was just completed at Jack Garland Airport in North Bay. (File photo)

The carrier blames a net loss of just over one billion dollars in the first quarter of this year, including a net cash burn in March of $688 million due to the global pandemic.

The air carrier recently announced massive lay-offs affecting roughly 20-thousand employees, over half of its workforce as it takes steps to reduce costs.

“We recognize that the airline industry is being hit hard because basically 95 per cent of the flights have been cancelled due to COVID and lack of demand. But this came as a complete surprise to us.”

The mayor has reached out to Nipissing-Timiskaming MP Anthony Rota, Nipissing MPP Vic Fedeli, the airport manager and the president of the North Bay and District Chamber of Commerce.

The announcement will have a significant impact on business, including the over 60 companies in the mining sector that rely heavily on having access to a local airport.

“I would like to say there are a good 100 businesses here that rely and depend on the airport. We have an aviation sector here in our community. There are over 300 jobs at Chorus Aviation (formerly Voyageur Airways). So, all of those put together makes this decision extremely important to us that we find an air carrier or work with the federal government to get Air Canada to continue the service when the pandemic eases off,” said McDonald.

“We recognize the demand won’t come back in six months to where it needs to be. It will probably be within the next two years. It will be a bit of a process, but we support having Air Canada in our community at the very least and we want to make sure we have an air carrier for all our local businesses.”

The number reflected a 4.7 per cent increase over the previous year, largely driven by Air Canada.

Leading up to March of this year, the airport was on track to experience another busy year.

“The COVID-19 pandemic has significantly impacted the aviation industry and will continue to do so until domestic, trans-border and international travel starts to flow again,” said McDonald.

“We will work with the two senior levels of government and the business community to play a proactive role in sustaining air travel over the next couple of years in order to return to pre-COVID-19 levels of traffic. We strongly believe that the airline industry will need to rely on the domestic markets, which provide solid numbers year after year, in order to recover and flourish moving forward.

McDonald equates Air Canada’s move to a game of chess.

“There is 32 pieces on that board. Thirty are pawns which are all the cities and the two kings are the Prime Minister and the CEO of Air Canada.”

The mayor confirms that Bearskin Airlines and Sunwing Airlines are two other carriers using the airport.

City Councillor Chris Mayne says without proper support, the city could face the possibility of having to close the airport.

“North Bay City Council confirmed support for the North Bay Jack Garland Airport for up to about $200,000 per month up to the end of December 2020. It is a challenging year with diminished city revenues, so finding that money at the best of times is a challenge. This year it is even more challenging,” said Mayne.

“Which could mean that without support from other levels of government, without trying to come to some sort of agreement with Air Canada, that North Bay could face having to look at closing the airport.”

McDonald says the request for support was made back in March or April.

“To date we have not advanced any money. They did have some reserves they were working with. There is no way we believe the demand for air travel is going to come back that quickly. More than likely there will be another request to city council to support the airport,” said McDonald

“Council can also reconsider their support now if they wanted to, that is also a possibility. The challenge is if they do not fund the airport and the airport closes, to reinstate an airport is a bit of a process with licencing and regulations. You just don’t close it and open it up the next day.”

Mayne says closure of any duration, will likely mean the loss of accreditation.

“Whether it is a few days, a few weeks, a few months it will likely mean the loss of accreditation as an airport. And to reopen an airport is not a short-term position. It could take months or years to re-achieve that accreditation. In the meantime, a lot of the jobs that are affiliated at the airport like Nav-Canada, like the MNRF, those jobs in the community could be lost permanently,” said Mayne.

“The MNRF uses it as an airbase for summer support. Nav-Can provides radar navigational assistance. Those are good paying jobs that we want to keep in the community.  If the airport closes those positions will move on and it could be really challenging to restore once they have left.”

“And what do you do with all the businesses that depend on the airport now?” wondered McDonald.

“I’ll use the one aviation company with over 300 jobs. If they don’t have an airport to land their aircraft that they provide maintenance to, they would have no way to preform their work.”

“It has been well used in the past connecting to other services to the benefit of Air Canada. Without those preferred connections from North Bay, I think Air Canada stands to lose more of its market share out of Toronto to competing airlines. So there has to be some value to Air Canada to stay in North Bay,” said Mayne.

“What can other levels of government provide as a short-term incentive to see some level of service return to the community, that keeps the airport open until the economy gets back closer to where it was before?”

The city has reached out to Air Canada seeking additional information.

Red Lake residents ordered to evacuate as fire closes in
Aug 11, 2020 7:56 AM
Comments
We welcome your feedback and encourage you to share your thoughts. We ask that you be respectful of others and their points of view, refrain from personal attacks and stay on topic. To learn about our commenting policies and how we moderate, please read our Community Guidelines.