Insurance issues, a lack of skilled tradesworkers, and competing demands for contractors resulting from other recent disasters have all played a role in delaying the region's efforts to return to normal.
0
Sep 18, 2019 9:58 AM By: Jason White 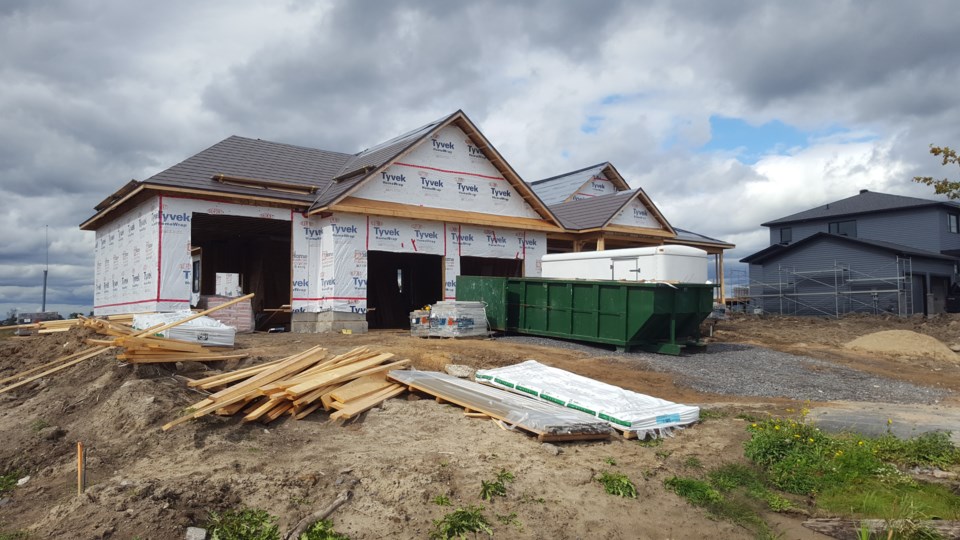 Multiple homes in Dunrobin, including that of Todd Nicholson and Emily Glossop, are still not fully built, nearly one year after the area was hit by a tornado. Jason White/1310 NEWS

NEPEAN — Nearly 12 months after tornadoes ripped paths of destruction through Nepean, Dunrobin and Gatineau, the scars are still visible and many are waiting for rebuilding efforts to finish.

Insurance issues, a lack of skilled tradesworkers, and competing demands for contractors resulting from other recent disasters have all played a role in delaying the region's efforts to return to normal.

When one of the tornadoes ripped through Trend-Arlington, one of the neighbourhood's signature mature trees came crashing down onto the second floor of Linda Cruz's house.

"The tree did damage, but then the roof wasn't completely sealed in with tarps," Cruz explained, standing next to the spot formerly occupied by said tree. "So rain came in, and damaged ceilings and floors."

The water damage was extensive, throughout both storeys and into the basement. There were more complications; building code changes meant the entire roof had to be replaced, not just the damaged portion. The additional weight of the new roof cracked ceilings, which then necessitated bringing in an asbestos removal company.

While Cruz has been told that she and her husband are its biggest customers, her contractor's past customers also include victims of another recent disaster.

"They were involved with the 2017 flood," said Cruz. "So with the flood this year, they were getting a lot of calls and being pulled off to do emergency work, there."

In Dunrobin, the end of Porcupine Trail looks like a new subdivision, filled with half-built homes; the result of the damage from last year's tornado that carved a path of destruction through the village.

"We've got a foundation, we've got a subfloor, we've got walls, we've got a roof, and three-quarters of the roof has shingles on it," said Todd Nicholson, in his family's still-under-construction bungalow. He's surrounded by framed walls and the exterior has been closed in, but the vapour barrier flaps in the breeze. "We still have a long way to go."

Nicholson's rebuild has been hampered by building code changes that required their new house to be two-and-a-half feet higher than their old one, as well as construction-related delays.

To keep costs down, the family has been doing some of its own labour. Nicholson's wife, Emily, has been taking on various labourer duties on the construction site.

In addition to helping to build their home, Glossop has been driving the couple's 10-year-old twins to catch the school bus in their old neighbourhood. Their current but temporary home, in Westboro, is a one-bedroom apartment.

"We're trying to see all of this as a big adventure for our family," said Glossop.

Around the corner, all that sits on the site of the former Dunrobin Plaza is a parking lot and concrete pad. Tenants are still waiting for construction to begin. In the meantime, speculation has swirled in the village over the past 12 months.

"Everybody's got different rumours -- there was a Tim Hortons going in here, there's a grocery store going in here -- we've heard different stuff," said Mike Fines, whose wife is one of the co-owners of Dunrobin Meat & Grocery. "(The landlord) is rebuilding the mall, I'm sure he is."

The landlord has not returned our request for comment, but the area's city councillor has said that many properties in his area have not been rebuilt due to issues with insurance companies, including the Dunrobin Plaza.

In the meantime, the past year has been hard on the business owners, not knowing when they'll be back nor what business will be like.

"I think definitely there's going to be a challenge," said Julie Delahunt, co-owner, Dunrobin Meat & Grocery. "A lot of people say that they'll come back, but it's hard; people get adjusted after a year of going other places."

About the Author: Jason White

Jason is an award-winning reporter on 1310 NEWS.
Read more

Expect to pay around 98.9 at the pumps in Sudbury today
0