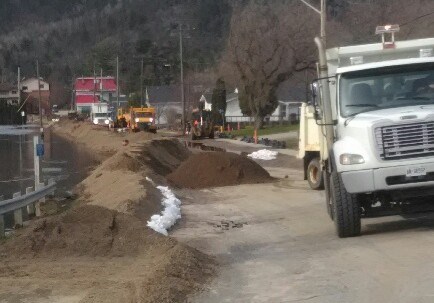 MATTAWA — As it experiences high water levels along the Ottawa River, the Town of Mattawa constructed a sand berm to protect homes from flooding.

However, that berm was breached over the weekend.

The town, which called a state of emergency on Monday, saw waters in the community rise again.

“Residents and Businesses situated at the lower end of Main Street, Water Street and Mattawan Street were evacuated as a precautionary measure due to a possible breaching of the ‘Sand Berm’ on the Mattawan Street shoreline,” the town of Mattawa stated on its Facebook page late Saturday afternoon.

“The Berm is being reinforced and repaired at this time.  The bridge was closed temporarily as a precaution and OPP are monitoring and re-directing traffic from the Highway 17 Round-A-Bout to the Bridge while these repairs are being completed.  It is anticipated that the Bridge and Main Street areas will be re-opened to local traffic later this evening.”

Due to the flood concern, the Municipal Office was relocated to the Mattawa Information Centre.

As of around 9 p.m. Sunday, Main Street in Mattawa was fully reopened to traffic.

"The town thanks everyone for their patience and co-operation while the work crews worked diligently to reinforce and repair the Sand Berm," said a press release.