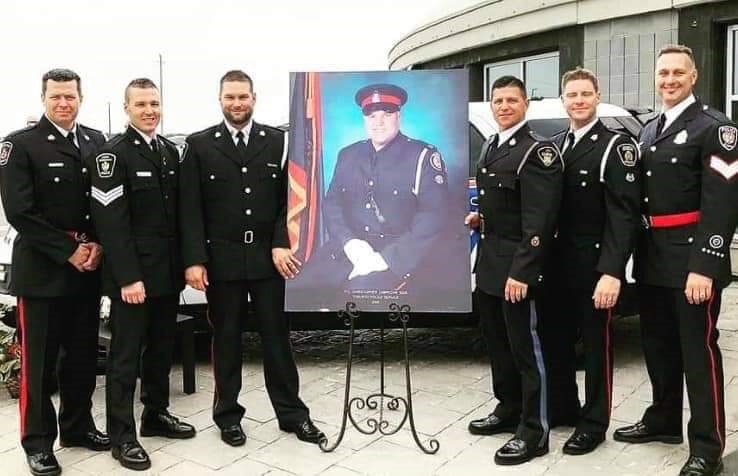 Christopher Labreche's pallbearers where the same six that were part of his wedding party. Photo submitted.

“He was a blue-eyed, curly-haired rascal and I think my fondest memory of him was the day I first saw him in his uniform as a police officer and I said to myself, ‘my sweet little nephew has grown up,” Robb said fighting off tears in an interview with BayToday.

On Wednesday, Lesley and a huge throng of supporters gathered at All Nations Church in Sudbury to say good-bye to Labreche. The 37-year-old Sudbury police officer died in a two-vehicle collision on July 4 about six kilometres south of the French River.  Labreche was off-duty at the time of the fatal crash.

Robb was amazed at the turnout for her nephew’s celebration of life.  She said more than 800 people attended and another 200 watched the service online.  His six pallbearers were the same six friends who were in his wedding party. Those grieving also included a huge amount of family from North Bay where Robb grew up along with Labreche’s mother, two aunts, an uncle and 11 cousins.  Labreche, who grew up in Sudbury, also had close connections to members of the North Bay Police Service and his North Bay hunting buddies.

“He was charismatic, thoughtful, caring, full of life, he had the warmest smile and the biggest heart. He was the most hilarious person you would ever meet in your life,” said Robb, from her residence in North Bay.

“He will be remembered by the hand-prints he left on so many and his life will be defined by the great and caring many that he was, he was a true hero.”

The defining moment of the celebration of life was a visit by a family that was impacted by Labreche’s time as a Sudbury officer.  In the fall of 2017, Labreche and his partner saved the life of a Sudbury girl who was involved in a car accident.

“Her and the father showed up after the funeral service and spoke about their appreciation and gratitude for Christopher and his partner saving his daughter’s life,” said Robb.

“It was very, very touching.”

Cannabis retail company eyeing up the Sault as part of province-wide expansion
May 26, 2020 7:37 AM