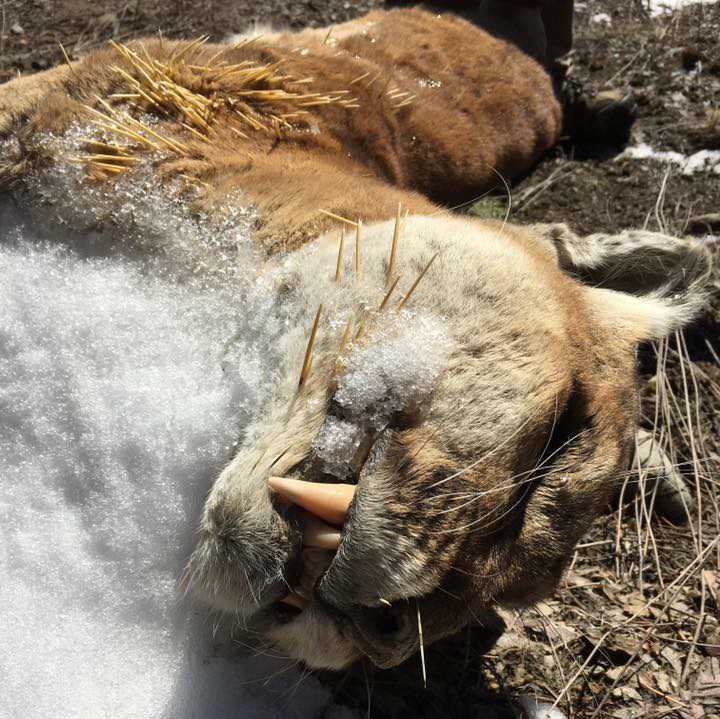 The Northwestern Ontario Sportsmen's Alliance posted this photo on their Facebook page of a dead cougar found by Mandi Weist on the Boreal Road.

THUNDER BAY - A unique find in the region has a local outdoor organization excited, as it finally answers the question surrounding an elusive, and rarely seen predator.

“This is a very significant find simply because of the fact that for many years people have recorded sightings and whatnot in the region of mountain lions and cougars, but there has been very little tangible evidence,” said John Kaplanis, the executive director with the Northwestern Ontario Sportsman’s Alliance. “In this case, it’s hard to argue that cougars are not here or at least passing through the area.”

The cougar found by Weist appeared to have died from natural causes, according to a taxidermist. It was very emaciated and looks to have had a run in with a porcupine.

Kaplanis said Northwestern Ontario is not typically the habitat where cougars are found, but a growing deer population could be bringing the predators to the area.

“As you get closer to Thunder Bay, significant prey species, like white tail deer, their densities are a lot higher near Thunder Bay," he added. "So if there are cougars cruising through the area along the north shore of Lake Superior, I would expect them to stop over here and visit for a little while if they are hunting and seeking prey.”

Despite the find, Kaplanis does not think cougars will become a mainstay in the region and even if they are here, they will still probably be quite elusive.

“I would call them temporary visitors,” he said. “I really don’t think we are going to see a significant buildup of the cougar population in the area and having them set up camp in the region any time soon.”

And while cougars are a predatory species who have been known to attack humans, Kaplanis said people in the region do not need to take any more precautions as they would when dealing with any other wild animal.

“It would be no different, the precautions you would take when dealing with wolves and bears,” he said. “But to consider this a threat or a danger to people in the area, no. I just don’t think we are ever going to see a population level of cougars in the region that would be rampantly taking down pets and livestock or things like that, not by any means.”

If you do happen to see the elusive cat, Kaplanis advises to report any sightings to the Ministry of Natural Resources so they can track movements and sightings in the region. And of course, keep your distance.

“If you encounter a cougar, stay away from it, and put as much distance as you can between yourself and the animal,” Kaplanis said.