'It’s disheartening that issues of overt racism are still happening on campus over a decade later from my time as an Algoma U student' - Calgary inclusion and diversity consultant Elise Ahenkorah
Aug 7, 2020 4:00 PM By: David Helwig 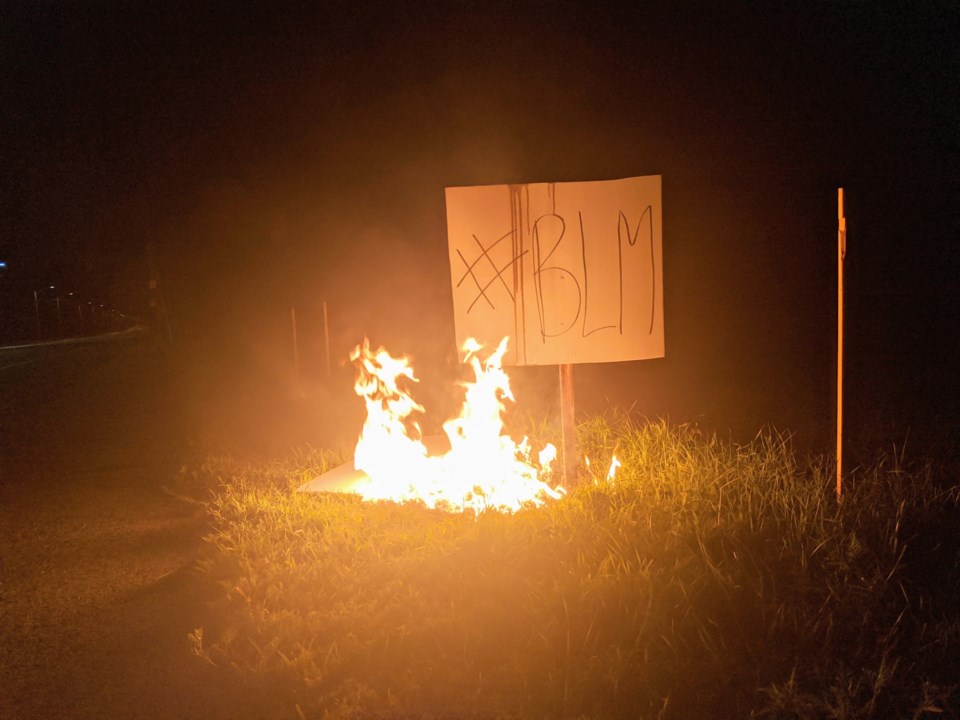 The commitment was made Wednesday by Police Chief Hugh Stevenson after a meeting with representatives of Algoma University Students' Union (AUSU) and the African Caribbean Canadian Association of Northern Ontario (ACCANO).

Chief Stevenson reached out to the two groups after SooToday reported a half-dozen Black Lives Matter signs were set fire around 1 a.m. Monday on the university's front lawn.

Originally made for a local Black Lives Matter rally in June, the signs had been subsequently displayed for some time in front of the university.

They had recently been removed to be refurbished but were placed back on the lawn last Friday.

SooToday's Carol Martin was driving friends home from her house early Monday when she spotted the flames and captured the photograph shown above.

Sault Ste. Marie Fire Services were called and quickly got the small blaze under control.

AUSU pressed Stevenson on Wednesday to investigate the sign-burnings.

The police chief promised a detective would be assigned to the case.

AUSU and ACCANO have met with him before but discussions have slowed since the COVID-19 emergency was declared.

"Algoma University condemns any acts of violence, vandalism or anti-black racism, and actively works to ensure safe inclusive spaces for all," said Asima Vezina, Algoma University president, in a written statement responding to the sign-torchings.

"Given the special history of the Shingwauk site, and as a university with three campuses and a very diverse staff and employee base, we have an obligation to stand firm against acts of racism and hatred."

"We continue to encourage our students as they peacefully vocalize their concerns on this important issue, one that impacts not only our community but many communities around the world."

"We will continue to work with the African Caribbean Canadian Association of Northern Ontario (ACCANO) and other community partners and call for peaceful discourse to further our understanding and conversation on racism," Vezina said.

“It’s disheartening that issues of overt racism are still happening on campus over a decade later from my time as an Algoma U student and AUSA member,” said Elise Ahenkorah, who began her studies at Algoma U 15 years ago and worked to found the university's first Black History Month celebration and a year-round presidential diversity advisory committee dedicated to establishing an inclusive campus environment.

"A consistent pattern of microaggressions and racism faced by racialized Algoma U students has been prevalent on campus dating back to my time as a student in 2005," Ahenkorah told SooToday.

"It is now 2020, and we are discussing the same issues. During my time at Algoma U, I did my best to create initiatives that would create inclusive change. But there is only so much change that can be championed and sustained by students."

A first-generation Ghanaian Canadian, Ahenkorah now lives in Calgary and is the founder of Inclusion Factor, a diversity and inclusion strategic planning firm, as well as #shemeets, a national organization supporting success of women of colour and Indigenous female artists, entrepreneurs and innovators.

Her work has been recognized by the United Nations and the Canadian Centre for Diversity and Inclusion.

She advocated for changes in 2010 after a controversial incident in which two students – one black, one Anishinaabe – were taken down at gunpoint by city police officers at Algoma University.

"More now than ever, it is time for the university’s executive leadership to demonstrate accountability and long-term commitments to creating a more inclusive campus through treating this issue in the same manner they manage other institutional objectives," Ahenkorah says.

"I hope that this – among the countless other similar incidents that happen on campus – mobilizes the university’s executive leadership to create measurable diversity, equity and inclusion (DE&I) strategies, tactics and partnerships to build a more inclusive and anti-racist campus environment."

"Also, to hire leadership that reflects its increasingly diverse student population to address these issues, similar to what other universities are doing to manage DE&I campus issues proactively."

Mayor Christian Provenzano waded into the sign-burning issue by posting a photograph of Black Lives Matter signs at the university and tweeting on Wednesday: "I express categorical support for ACCANO/AUSU and their important work."

"We must keep working to become a community where everyone is accepted, respected and welcome," the mayor said. "It starts with recognizing racism/bigotry exist, and we have a responsibility to stand against both."