'We’ve heard concerns from property owners, hunters and anglers, and commercial fishers about the kind of damage cormorants have caused in their communities, so we’re taking steps to help them deal with any local issues.'
Aug 4, 2020 4:00 PM By: Stu Campaigne 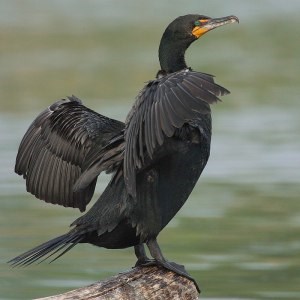 NORTH BAY — In a bid to protect fish stocks and natural habitat from the harmful impacts of double-crested cormorants, the Ontario government is introducing a fall harvest for the species.

The province says these steps will help address concerns about impacts on local ecosystems by cormorants, what it calls a "predatory bird capable of ingesting one pound of fish per day and known to have damaging effects on trees in which they nest and roost."

Executive director Angelo Lombardo said the Ontario Federation of Anglers and Hunters is pleased by the measures enacted to help "control overabundant cormorant populations to help protect Ontario’s ecosystems, and we are encouraged to see that the MNRF has made adjustments to the original proposal in response to concerns expressed by the OFAH and others.”

“We have seen firsthand the issues that cormorants have caused, especially on Lake Nipissing,” said MPP Vic Fedeli. “We’re listening to local residents who
have voiced their concerns and asked for additional tools to address the issue. A new fall hunting season will help communities manage cormorant populations where they have negatively impacted natural habitat and other waterbird species.”

“We’ve heard concerns from property owners, hunters and anglers, and commercial fishers about the kind of damage cormorants have caused in their communities, so we’re taking steps to help them deal with any local issues,” said John Yakabuski, Minister of Natural Resources and Forestry. “In large amounts, cormorant droppings can kill trees and other vegetation and destroy traditional nesting habitats for some other colonial waterbirds, so it’s critical that we take action to strike a healthy balance in local ecosystems.”

The Ontario Commercial Fisheries’ Association has expressed concern "about the significant negative impacts of uncontrolled populations of cormorants on the ecosystem, including the commercial fishery. In addition to the serious destruction of vegetation that unchecked populations have caused, cormorants have seriously undermined certain fish stocks on the Great Lakes."

Following public consultations, the province has made changes to its initial proposal and has decided to introduce a hunting season this year that will run annually from September 15 to December 31.

“We listened to those who provided comments about the cormorant hunting proposal, and as a result, we are introducing only a fall hunting season to avoid interfering with recreational users of waterways and nesting periods for some migratory birds,” clarified Yakabuski. “We have also reduced the maximum number of cormorants a hunter can take to 15 a day, which is a similar limit to one for federally regulated migratory game birds such as mourning doves, Snow and Ross’s Geese, Rails, coot and Gallinules.”

In 2019, the MNRF and partner agencies surveyed cormorant colonies across the Great Lakes and select inland lakes in Ontario. Based on nest count surveys, there are, at minimum, an estimated 143,000 breeding cormorants in 344 colonies across the province. Combined with historical data, trends suggest that cormorant populations are increasing in Lake Ontario, Lake Erie, and Lake Superior and are stable on the St. Lawrence River and Lake Huron.

Executive Ddrector Jane Graham says the Ontario Commercial Fisheries’ Association strongly supports the government’s decision to introduce a fall hunting season that "will help to control damaging cormorant populations. Our position has not been to seek the extinction of cormorants from Ontario but for the management of cormorants to promote a balanced ecosystem, which is in the best interests for all Ontarians.”

Northern Ont. mining company uses new device to keep COVID-19 off the mine property
Sep 19, 2020 2:00 PM
Comments
We welcome your feedback and encourage you to share your thoughts. We ask that you be respectful of others and their points of view, refrain from personal attacks and stay on topic. To learn about our commenting policies and how we moderate, please read our Community Guidelines.

Letter: Thank you for your efforts in adhering to COVID-19 protocols
0

Porketta bingo fundraisers are back at the Trevi
0