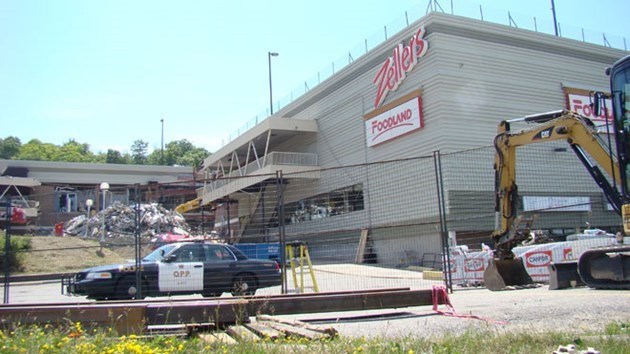 The Algo Centre Mall in Elliot Lake is pictured in this file photo taken after the 2012 roof collapse.

Former engineer Robert Wood took the witness stand in his own defence Tuesday as his trial on charges stemming from the fatal Elliot Lake mall collapse resumed following a three-week hiatus.

The Sault Ste. Marie man, who faces three charges in connection with the June 23, 2012 cave-in that killed two women, was the first witness called by his lawyer, Robert MacRae, as the defence began its case.

Court heard about his engineering background and experience, as well as details of the first inspections he conducted at the Algo Centre Mall in 2009, three years before the deadly incident.

Doloris Perizzolo, 74, and Lucie Aylwin, 37, died and dozens of people were injured when the rooftop parking deck collapsed.

The Crown witnesses included people who were at the mall that afternoon when a 40-foot-by-80-foot section of the parking deck fell onto the food court and a lottery kiosk, where Perizzolo was purchasing a lottery ticket from Aylwin.

As well, Superior Court Justice Edward Gareau heard from police investigators, workers at businesses in the mall, municipal officials and employees, the mall owner, a prospective purchaser, and engineering experts.

Wood, an employee and owner of the now-defunct Sault-based engineering firm M.R. Wright and Associates, conducted a structural inspection of the mall's leaking roof and parking deck on April 12, 2012, weeks before the collapse.

The first day of his testimony on Tuesday centred on work he did for the mall in 2009, when he conducted a structural inspection of space that the federal government was interested in for a Service Canada office.

Wood said he inspected the space on May 27, 2009, with the mall manager and after removing ceiling tiles in the area, found structural beams in "pristine condition."

"I saw absolutely nothing out of the ordinary," he told MacRae.

In September of the same year, he said he was retained by mall owner Bob Nazarian, after he had been served with remedy notices from the municipality's chief building official and fire inspector, to review structural areas identified in the orders.

He said he wasn't provided with any information on the mall's history.

Wood told the court he was interested in damage that had been identified by the building official and "was looking at nothing more" than recent leaks that had washed fireproofing off some of the beams' lower flanges.

"I saw no water in the building," he said, adding, "I believed what the owner was telling me, that they were doing repairs and the repairs were successful."

Wood said after he provided a report in October 2009, the mall owner obtained the services of a Sudbury company to complete fireproofing of structural steel in the structure.

He testified that one of his employees did a site inspection in December of that year, after the fireproofing had been inspected by the Elliot Lake fire department and officials indicated more fireproofing had to be done.

There was nothing in photographs he reviewed that caused him to have any concerns about the structural steel at that time, Wood said.

On Tuesday, the court also heard that the London, England-born Wood moved to the Sault in the 1970s and joined M.R. Wright in 1976 as a senior structural engineer.

He outlined an extensive list of local projects and buildings, including the Essar Centre in Sault Ste. Marie, that he worked on as a structural design engineer.

Wood is back on the witness stand today.

Linda Richardson is a freelance journalist who has been covering Sault Ste. Marie's courts and other local news for more than 45 years.
Read more