Justice Fletcher Dawson said he was not convinced beyond a reasonable doubt that the three accused had committed extortion.
0
Feb 21, 2020 7:00 PM By: Doug Diaczuk 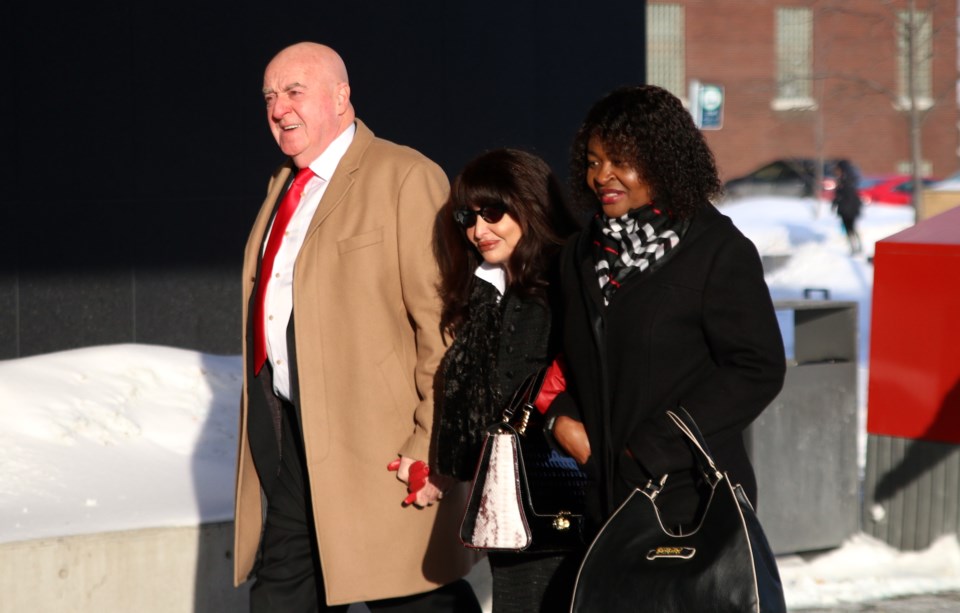 THUNDER BAY - Former Thunder Bay mayor Keith Hobbs and his wife Marisa Hobbs have been found not guilty of extortion.

Mary Voss, who was facing a charge of extortion, has also been found not guilty.

Justice Fletcher Dawson read part of his 155-page decision before the court Thursday morning following a 15-day trial that opened on Nov. 18, 2019.

Dawson concluded that the charge of extortion against the three accused has not been proven beyond a reasonable doubt.

The judgment detailed the factual background in the case, as well as the timeline, and an analysis of the evidence.

Dawson agreed with Crown attorney Peter Keen and defense counsel for Keith and Marisa Hobbs, Brian Greenspan, that the case was about determining ‘who was driving the bus,’ either the three accused or the alleged victim.

“Counsel on both side would be devoting their energy to proving who was driving the bus,” he said. “That is accurate.”

Dawson also agreed that much of the testimony from those involved in the case does not align with how people are expected to behave.

But ultimately, Dawson said aspects of the Crown’s case, including relying on timelines presented in the testimony of the alleged victim were problematic.

“It seems to me, that by making this decision, Crown council is trying to pound a square peg into a round hole,” Dawson said.

With respect to the separation agreement drafted by Keith Hobbs and detailing the alleged victim purchasing a $429,000 house for Voss, Dawson said, “it does not contain an explicit threat or menace as indicated in the original indictment.”

But he added that is not to say threats did not occur outside of the drafting of that agreement.

In his decision, Dawson questioned the reliability and credibility of both Crown and defense witnesses.

Dawson said the testimony of the alleged victim was not reliable because he was drinking heavily at the time, testified to having varying degrees of memory, and was prepared to pay off people to avoid allegations.

“He was a thoroughly unreliable witness,” Dawson said. “At the relative time he was of generally bad character. He was taking advantage of others.”

Dawson added that the alleged victim’s testimony was contradicted by the testimony of others, which demonstrates that it may have been fabricated.

The alleged victim’s behaviour and demeanour while testifying was also referenced by Dawson, saying he often gave expansive answers and tended to describe things in a way that were favourable to him.

“The manner in which he gave his evidence seemed dramatized and contrived,” Dawson said.

Dawson added that the evidence also demonstrates mood swings and erratic behaviour on the part of the alleged victim where he was “was friendly and conciliatory in one moment, and menacing and threatening the next.”

Dawson raised concerns about the evidence provided by other Crown witnesses as well, including that of Heli Kijanen and Craig Loverin.

“I have severe reservations about placing much reliance on Heli Kijanen’s evidence,” he said.

He also characterized her as ‘flippant’ and ‘disrespectful’ and that she was not ‘confidence inspiring’ while delivering her testimony.

Dawson added that Kijanen’s two-faced approached toward Voss and past relationship with the alleged victim “causes me to view her evidence with considerable skepticism.”

“I formed the impression that she was a biased witness, with a poor recollection, and was out to assist the (alleged victim),” Dawson added.

Regarding the testimony of Craig Loverin, who detailed meeting with Keith Hobbs in a parking lot where he gave him the USB drive with videos of the alleged victim, Dawson said while there was nothing about Loverin’s demeanour during testimony that raised concerns, he did have issues with the credibility and reliability of some of the evidence he provided.

“Loverin was inconsistent in his trial testimony of when he learned about the existence of the videos,” Dawson said.

Dawson added that because Loverin was close with the alleged victim, he cannot be convinced that he did not reorder his recollection of events because of bias.

Dawson also questioned the testimony of Keith Hobbs, but he said he must take the evidence provided by Hobbs in the context of all evidence presented in the case.

“I do not accept all of Keith Hobbs evidence, there are also portions of his evidence that I reject,” he said.

Dawson referred the Keen examination of Keith Hobbs’ testimony, asking why he did not go to the police.

Dawson detailed several locations Hobbs could have gone to the police, including after watching the videos of the alleged victim.

“I don’t see his failure to act as nothing more than bad judgment,” Dawson said.

Hobbs testified that he repeatedly asked Voss to go to the police, but she was fearful of doing so and was conflicted in what to do.

“He was in the middle of a situation involving his wife and her friend,” Dawson said. “He did not act in a cool manner, does not demonstrate he was not truthful in giving his evidence.”

But Dawson raised concerns about other aspects of Hobbs’ testimony, including why he said he would go directly to the chief of Thunder Bay Police the Monday after the separation agreement was signed.

Dawson said it did not make sense because it would then negate what was written in the agreement.

“I believe he exaggerated his attempt to portray himself in a better light,” Dawson said. “It seems to me Keith Hobbs has tried to present himself in a more favourable light than the circumstances sometimes warrant.”

“They were lashing out in desperation,” Dawson said. “They could not believe they were being investigated for extortion.”

The tactics used by Ontario Provincial Police Det. Insp. Martin Graham were not required all witnesses were willing to speak.

“The bottom line of my assessment of Hobbs credibility is there was part of his evidence I reject,” Dawson said. That requires caution. There were also some inconsistencies with his testimony and past statements. When they are closely scrutinized, the differences do not appear to be as significant as they first appear.”

Dawson said there was nothing about the three statements given by Marisa Hobbs to police that raises any concerns regarding her credibility.

“Overall I find Marisa Hobbs statements to the police to be credible,” Dawson said. “I am not persuaded that I should not accept what she said to be untruthful.”

With respect to statements made by Voss to police, Dawson said he found her to be credible as well.

“Having viewed the videos and the transcripts, there is much in the statements that assist Mary Voss,” he said. “I think much of what she says that helps her is true.”

Witness testifies of interactions between Hobbs and alleged extortion victim

Day 3: Videos from USB drive given by Hobbs shown in court

Day 9: ‘We are guilty of being stupid:’ Marisa Hobbs tells police

Marisa Hobbs ‘won’t take no for an answer:’ Voss

Day 13: ‘I have never threatened (the victim):’ Hobbs testifies