Georgian officially acknowledges that campuses are located on Anishnaabeg land

Events marked beginning of effort to further infuse Indigenous ideas and values into Georgian’s activities and processes
Nov 4, 2016 7:38 AM By: BarrieToday Staff 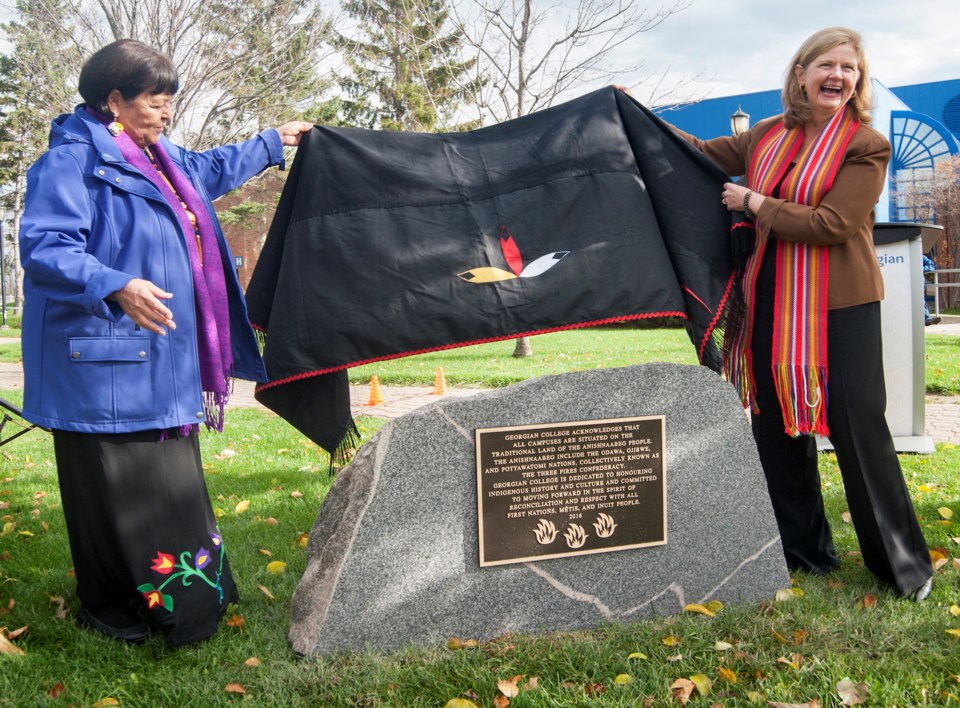 Lorraine McRae, Rama First Nation Elder, and MaryLynn West-Moynes, President and CEO of Georgian College, unveil a new plaque at the Barrie Campus. The plaque officially acknowledges that Georgian campuses are located on the traditional land of the Anishnaabeg people.

The ceremony was followed by a workshop about the Truth and Reconciliation Commission of Canada, led by Dr. Cynthia Wesley-Esquimaux of Lakehead University.

Georgian has offered Indigenous services and programs since 1992. Today’s events marked the beginning of a college-wide effort to further infuse Indigenous ideas and values into all of Georgian’s activities and processes. Enhanced Indigenization is an organizational priority in Georgian’s new Strategic Plan.

Moving forward, all major Georgian events will begin with a statement acknowledging that the Anishnaabeg people are the traditional stewards of college land. All Georgian faculty and staff will also be invited to participate in a series of knowledge-sharing workshops led by leaders from the Indigenous community.

“The Truth and Reconciliation Commission marked the beginning of a new and more hopeful chapter in Canadian history,” says Dr. MaryLynn West-Moynes, President and CEO of Georgian College. “Georgian wants to be part of the nationwide effort to restore trust between Indigenous peoples and public institutions – and we think that effort begins right here on our campuses.”

“It’s important to acknowledge that Indigenous people are the original inhabitants of Canada,” explains Tareyn Johnson, Indigenization Co-ordinator at Georgian College. “Honouring our nation’s history will lead to a future built on reconciliation and respect.”

Future Indigenization projects will include updates to curriculum for full-time programs, as well as additional tools and resources for Georgian staff and faculty.