Shoreline erosion, flooding along Great Lakes becoming cause for concern after records set over past two months
0
Jul 12, 2019 12:00 PM By: James Hopkin 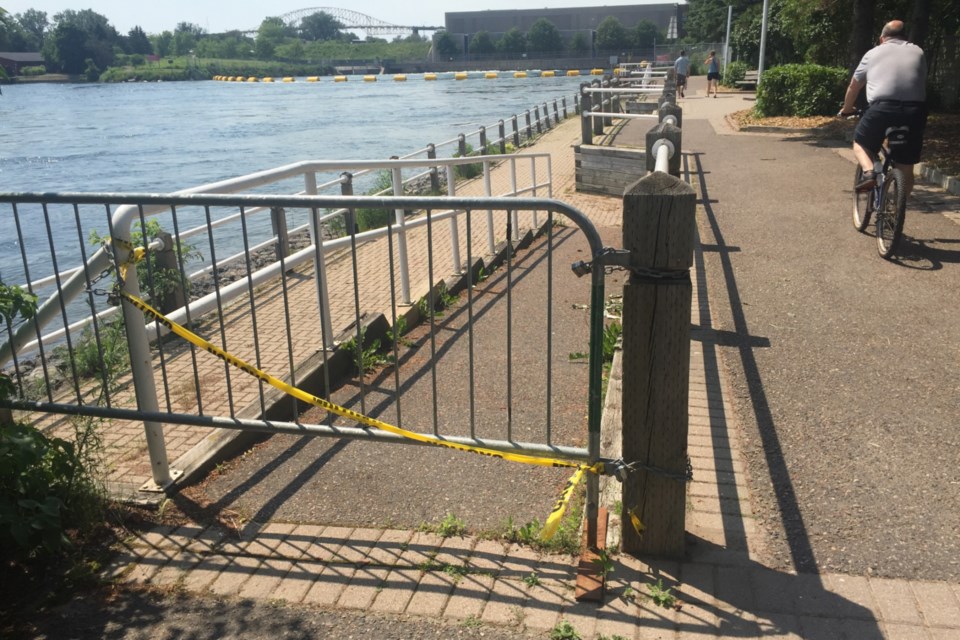 The City of Sault Ste. Marie shut down this boardwalk platform near Mill Market due to erosion caused by high water levels. David Helwig/SooToday

SAULT STE. MARIE — The Great Lakes and its connecting channels experienced record-breaking high water levels for the months of May and June.

Those water levels, monitored by the US Army Corp of Engineers in co-ordination with Environment and Climate Change Canada, aren’t going unnoticed by those who live and work on the waters edge.

Dave Steele, a Harmony Beach resident who manages Gitchee Gumee Marina in Haviland Bay, says that when water levels were low, people would use markings at the marina to determine whether or not they could go out on the water.

“We would have to wait until the water was at a certain mark before we knew we could get out of the marina, and now it’s irrelevant,” said Steele. “We don’t even have to care, we just go.”

Steele hasn’t seen anything like this since he built his home in Harmony Beach back in 1994.

He says that people in the area are finding their boats adrift after breaking away from moorings at camp, and they’re coming to his marina to dock - in an effort to protect their boats.

Steele is also noticing that shoals in the Haviland Bay area that were once above water are now below water, causing boaters to collide with them.

“The water levels are back to where it was beyond 25 years ago,” he told SooToday. “It’s good for us, because it makes our entrance channel a lot deeper - we got over six feet now coming in.”

“So that’s a good thing for us. The bad thing is, there’s lots of shoreline erosion happening. A lot of people are losing beaches around here.”

Steele says that shoreline erosion near Whitefish Point in Michigan is also impacting people who live in that area.

“It’s taken hundreds of feet of the shoreline back into the bush,” he said. “It’s really, really wild.”

“There’s trees down, they’re on the verge of losing houses on the American side.”

Jacob Bruxer, who is the Canadian regulation representative for the International Lake Superior Board of Control, tells SooToday that record water levels were set in the months of May and June for Lake Superior, Lake St. Clair, Lake Erie and with near-record highs set for Lake Michigan and Lake Huron.

Lake Ontario also broke water level records for the month of May.

“The mid-to-late ‘80s was the high water period across the Great Lakes, but we’ve eclipsed those records, at least for the time of year,” Bruxer said.

Active weather, when combined with those record-setting water levels, is becoming a cause for concern for many who live along the Great Lakes.

“When we get these storms and wind events causing waves and storm surge, that’s been resulting in flooding, also shore protection damages [and] erosion along the shoreline of all the Great Lakes and presenting a very difficult situation for folks who live along the shoreline,” Bruxer said

In Sault Ste. Marie, one doesn’t have to look very far to see the impact of rising water levels - they just have to walk by the portion of boardwalk platform that's situated near Mill Market.

According to public works and engineering services deputy chief administrative officer Larry Girardi, The City of Sault Ste. Marie has shut it down indefinitely until it’s assessed for erosion, and deemed safe for the public to use again.

Meanwhile, 9&10 News in Michigan reports that high water levels have resulted in Soo Locks tonnage record being broken this summer, when a freighter transported 76,000 tons of iron ore through the locks Monday.

High water flows in the St. Marys Rapids also have the International Lake Superior Board of Control urging the public to use caution when using low-lying areas near the rapids, such as Whitefish Island.

“The high water levels are also resulting in the outflows from Lake Superior through the St. Marys River being very high as well. This includes maximum flows being released through the hydropower plants there in the Soo as well as high flows being released through the compensating works dam, and resulting in high flows and water levels immediately downstream in the St. Marys Rapids,” said Bruxer. “This is unfortunately interfering with recreational fishing in this area and also flooding some areas and trails in low-lying areas of Whitefish Island adjacent to the rapids, we continue to urge people to use caution when in these areas given the conditions.”

More information on water levels throughout the Great Lakes can be found at the US Army Corps of Engineers Detroit District website.

- with files from David Helwig