But that's probably not the case, Indigenous-led student research centre says
Jan 17, 2020 7:58 AM By: James Hopkin 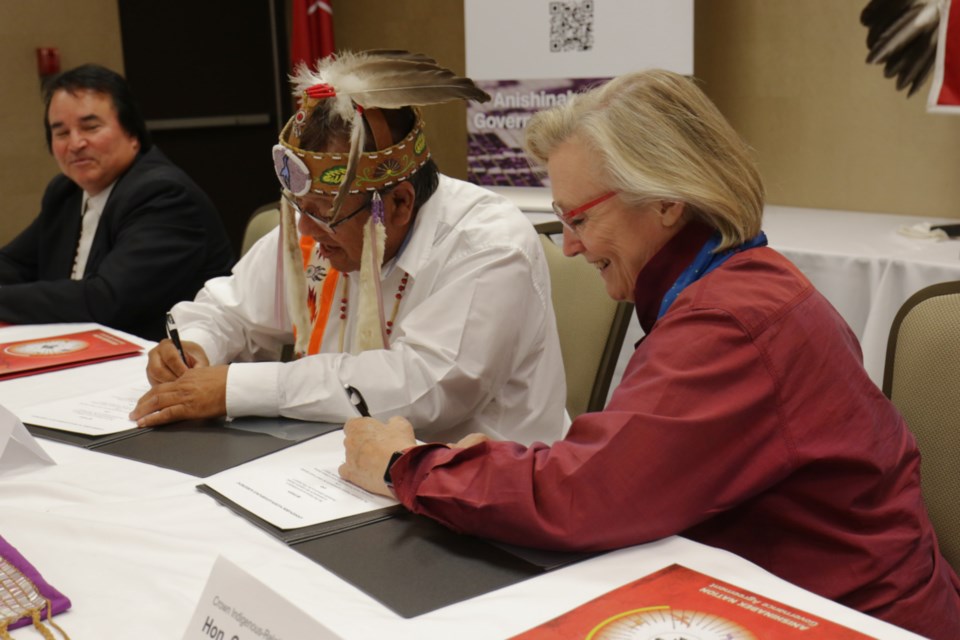 SAULT STE. MARIE — Anishinabek Grand Council Chief Glen Hare says the Anishinabek Nation - a political secretariat representing more than 60,000 people across 40 First Nations - has made a “giant step” in the implementation of the proposed Anishinabek Nation Governance Agreement (ANGA), a document that’s been 25 years in the making.

That agreement, if successfully ratified, would remove First Nations from provisions of the Indian Act that deal with leadership selection, citizenship, language and culture, and operations and management of government.

Citizens of the Anishinabek Nation will vote on the proposed agreement Feb. 1-29.

“It’s a huge step, it’s history-making,” Hare told SooToday during the Anishinabek Nation Governance Summit in Sault Ste. Marie Wednesday. “It’s going to give the authority, the autonomy to the leadership of our communities to see to what happens in our community will come from their leadership.”

"I think for the most part they're on board"

A total of 19 First Nations are prepared to hold a ratification vote in February.

Martin Bayer, chief negotiator for the governance agreement, says there will also be opportunities for communities to hold a second vote after the first vote is complete - if the voting doesn’t meet the voting participation threshold (25 per cent plus one), the second vote is triggered.

A second vote can also be applied to First Nations that are not ready for the first vote.

The Anishinabek Nation has been hosting a number of information sessions on ANGA in its member First Nations leading up to the ratification vote - a move, in part, to shed light upon the governance agreement itself, and to quash any potential misconceptions the nation’s citizens may have surrounding ANGA and the implementation of an Anishinabek Nation Government - if ANGA is successfully ratified - on April 1, 2021.

“I think for the most part they’re on board,” Bayer told SooToday Wednesday. “There are some misconceptions out there. There’s a conception that the Anishinabek Nation government that’s going to be recognized and formed through the agreement will be somehow higher than the First Nation governments, which isn’t the case - in fact, the Anishinabek Nation Government will be comprised of representatives from those First Nations that ratify the agreement. So in that respect, they’re one and the same.”

“The First Nation leaders from the communities that vote in favour of the agreement will be part, and form the Anishinabek Nation government.”

Jidé Afolabi, fiscal negotiator for the governance agreement, says that if ratified, ANGA will provide First Nations with increased funding for governance activities, which would help communities who engage in what he calls ‘deficit funding’ - or, in other words, running a deficit while trying to fund basic services.

“One key objective we had in negotiating this agreement is to resolve that issue,” said Afolabi. “We were able to, so we were able to get an average increase of seven times more money for governance activities - which means that now you actually have the capacity to hire people properly and to pay them.”

Dr. Hayden King, executive director for Yellowhead Institute - an Indigenous-led student research centre at Ryerson University - released a critique on the centre’s website Wednesday, calling the Anishinabek Nation "the only clear winner" in ANGA by transforming itself into a "federally recognized regional government."

King also argues that “little clarity” has been provided by the Anishinabek Nation on why ANGA should be supported:

Until recently, it was difficult to even find a copy the ANGA, but merely a “plain language” version that obscurs many of the actual details (this is still the only version available on the ANGA website). There are fact-sheets on the “pros” but never the cons, those with critical questions are dismissed as out-of-touch academics, and community consultation staff are encouraged to parrot Anishinaabek Nation speaking points.

On Thursday, Bayer told SooToday that the Anishinabek Nation has always had the agreement available online, and that the plain language version is merely an attempt to summarize a lot of technical details within the agreement due to demand for “more simplified versions with less paper.”

“We’ve had copies of them at all of our meetings, at gatherings like this, it was available online - so I’m not sure what he’s referring to there,” Bayer told SooToday in response to King's critique.

Regarding self-government, there is nothing on offer in the ANGA that can’t be obtained through existing federal policy. In fact, most of the “powers” Anishinaabeg are being granted have existed for many years.

“There’s a lot more funding available to put these new laws in place,” countered Bayer. “There’s implementation dollars available, there’s dollars they’re going to receive every year to perform their functions, so for him to suggest that they’re getting these things now - that may be the case, but it’s being done on their own dime, and they still have to send them to Ottawa for approval.”

Communities will "finally have a say": Hare

Although King says the process of getting its citizens on board with ANGA was rushed, Hare, on the other hand, says there’s been a lot of sacrifices made by a lot of people - some of which are no longer around today - over the past 25 years in order to see ANGA through.

“Our chiefs, our communities are finally going to say what happens in our communities - to citizenship, to the selection of our leadership and who belongs, and all those good things that Ottawa’s been trying to run? Not [anymore], it’s us,” Hare said.

The federal government officially signed off on the governance agreement during a press conference in Sault Ste. Marie this past August.

Resource materials and voting information can be found at the ANGA website.