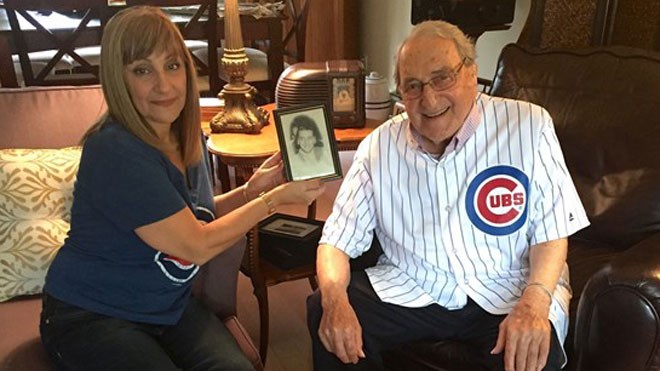 Lisa Demarco and her 96-year-old Dad Tony DeMarco, are two of the biggest Cubs fans in North Bay. Photo by Chris Dawson.

It may not have been very easy if you were 25, much less 96, to stay up late to watch the epic finish of game seven of the World Series Wednesday night.

But 96-year-old Cubs fan Tony DeMarco didn’t fall asleep for a second during the game which ended around 1 a.m. as the Chicago Cubs edged the Cleveland Indians 8-7 in the 10th inning to become World Series champions.

It was an emotional roller coaster for DeMarco, who was one of only 400 people still alive that saw the Cubs play in the World Series in person.  That was back in 1945, when the Cubs lost in seven games to the Detroit Tigers.

The DeMarcos held a baseball party to watch the deciding game at the Norman Street home last night as they all cheered on the Cubs, hoping they could complete the comeback as they were down 3-1 in the series but battled back to force game 7 in Cleveland.

“It was so emotional, it wasn’t about the game but more about my Dad,” said Lisa DeMarco, Tony’s daughter.

“It was strange, we just wanted it so much for him, so when it happened, we all gathered with my brother and sister,so we held his hand and after it was over the four us, we all cried.”

Much like in the Cubs dressing room, the DeMarco’s held a champagne party to celebrate the first Cubs World Series win since 1908.

“It was unbelievable," said Tony "I didn’t think I’d live long enough to see them win.:

Tony and the family's passion for the Cubs is well documented, as they also received phone calls from as far away as Chicago and Australia at 2 a.m.

Lisa says the excitement didn’t exhaust Tony as he stayed up until about 3 a.m. watching the local Chicago channel WGN as Cubs fans celebrated outside Wrigley Field and across north Chicago.

And with the talent and youth on the Cubs roster, he believes he may only have to wait another 365 days to see the Cubs win it again.

“To see the young players come through, it’s such a great team and has so much promise for the future,” he said.