The new and improved Wawa Goose might outlast Wawa itself

Third generation Wawa Goose to be unveiled on July 1
Jun 20, 2017 11:59 AM By: Jeff Klassen
Previous Next
1 / 1 A recent photo of the new version of the Wawa Goose under construction by Research Casting International in Trenton, Ontario. The new goose is to be painted and then shipped to Wawa where it will be unveiled to the public on July 1, 2017. Image Supplied
Expand
Previous Next

The new Wawa Goose is going to have a slightly different paint job, a new style of base, and will have a rust-proof bronze exterior, says Wawa Chief Administrative Officer Chris Wray.

Since 1963, the iconic 28-foot tall steel Canada goose monument has been visible from the Trans-Canada Highway in Wawa and has been a popular tourist stop on the long drives across northern Ontario.

Although iconic enough to have at one time been put on a postage stamp, the current Wawa Goose is actually the second one.

The original sculpture was built in 1960 to coincide with the construction of the Trans-Canada Highway going through the area. Because the highway didn’t pass through town, it was a way to let those going across the country know that Wawa was there. 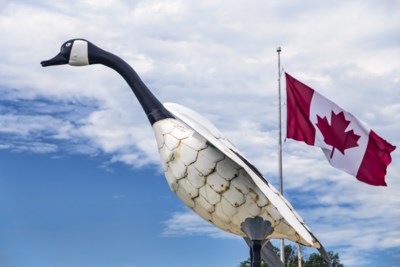 Wawa Goose version 2.0. On June 27 it will be replaced by a third generation replica. File photo

The original was made of plaster and couldn’t withstand the harsh northern environment, so it was replaced three years later by an Algoma Steel-made one that's been standing since.

In a week and a half, that will change.

Over the last decade, the iconic Wawa goose began to fall apart from rust and at one point there was the potential for one of the wings to fall off.

The new version of the monument, which is to be installed on June 27 and then covered in a parachute until its unveiling on July 1, has an exterior of rust-proof bronze.

While Research Casting International has done other works of art before, it is more renowned for dinosaur skeleton reconstruction.

The company has cast life-sized dinosaur and whale skeletons for The Smithsonian, The Natural History Museum in London, the American Museum of Natural History, and The Royal Ontario Museum.

Fair said that in order to make an accurate copy of the current monument, they started off with high quality 3D scans.

From the scans, they used a high-powered water jet to cut 40 sheets of 2 by 10 foot bronze into pieces which were then bent and manipulated using an English Wheel, a plate roller, an hydraulic press, and by ‘cold forging’ — basically, just hitting the bronze with a hammer.

To finalize the shape, the cut pieces were welded and attached to a stainless steel base and then sand blasted and polished.

All that’s left to do now, said Fair, is to paint it and ship it by transport truck from Trenton to Wawa.

Fair commented that, since ancient bronze statues have survived thousands of years, so can the new Wawa Goose.

He said that in the worst case, the exposed bronze might oxidize and turn green. However, if the paint — two-part automotive grade urethane — is continually looked after, that shouldn't be a problem.

Wray said the new paint job is going to have more of a natural tone than the current goose. 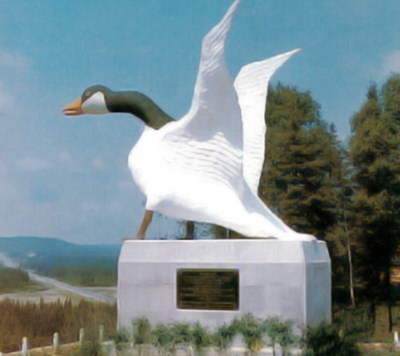 The original 1960 Wawa Goose that was built out of a chicken wire frame and plaster. Image Supplied

It will have the same base colours, but with different tones that more accurately represent a real goose, he said.

Wray said the new base will be less ‘plain Jane white’ and instead represent the type of granite rock face one might see on the highway driving through Ontario.

“The whole town is excited; the council is excited,” said Wray. “The notoriety this has brought our little community… it will pay dividends into the future.”

Wray spoke about the bird’s icon status and he believes that if it isn’t the first major roadside sculptures in Canada — it’s one of the first.

In the years immediately following the Wawa Goose’s construction, other towns built their own monuments.

And what is to become of the old goose?

Wray said it hasn't been finalized but in the works are plans to give larger more iconic chunks like the head and wings of the goose to some of the major donors — he mentioned Algoma Power as a large contributor.

As for the rest of the sculpture, Wray said one idea is to melt it down and make miniature, perhaps key-chain sized commemorative Wawa Goose replicas.

However, none of that is finalized yet and it will all be decided after the big unveiling on July 1.

Although it wasn't originally planned, said Wray, the unveiling of the new goose coincides with Canada's 150th birthday.

About the Author: Jeff Klassen

Up to 20 mm of rain, possible thunderstorms in the forecast today
0