'I've been here 30 years, and the cigar was here well before me'
0
Feb 5, 2018 8:33 AM By: Andrew Autio, freelance
Previous Next
1 / 1 Although its exact origins remain murky, cigar bread remains a Timmins classic. Andrew Autio for TimminsToday
Expand
Previous Next

Although it is known for many delights such as honey dipped donuts and custom cakes, Golden Crust Specialty Bakery has a long and somewhat hazy history regarding another Timmins classic - a pillowy 'non-pan' bread, with somewhat unclear origins known as 'cigar bread.'

"We'll go back to the evolution of the baguette. The baguette started as a 'miche' (round pan) and over the years, some people preferred more crust. So how do you get more crust out of a loaf? You extend it out, you make more surface available to the heat. That's why we ended up with the french stick, or the baguette. Somewhere in between, the cigar came about. A combination of both," said Golden Crust owner Mike Rodrigue.

"To make a loaf like that you need specialized equipment, especially your oven."

Rodrigue can't quite put his finger on how it became such a local staple, which can be bought whole or sliced, 'split' or original.

"I've been here 30 years, the cigar was here well before me."

Although he is certain it goes back several owners. He has heard a few tales of corporate bullying when it comes to classic sandwich bread.

"He was delivering bread all throughout the north, and then he got into some 'scuffles' with the big companies, Weston, Canada Bread. whoever it was. He decided to pull out of that. So he had to come up with a different product to make a go of it." 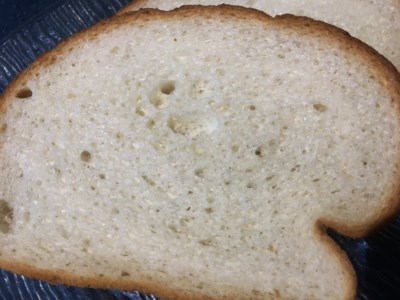 A slice of cigar bread, with its signature chewy crust, soft, airy interior and imperfect shape. Andrew Autio for TimminsToday

"That's when he started making all of this," as he motions to the racks of specialty breads on display.

"The rye breads came about at that time too, I'm told."

Currently, Golden Crust bakes 25 to 30 varieties every morning, and there are people working around the clock. They go through over 3,750 pounds of flour each week.

Throughout the decades, the popularity of cigar bread has remained steady, but the increasing awareness of food culture in media has helped introduce it to younger generations, although very little information about cigar bread is available.

"It's trendy. I guess it depends what you see on the Internet. When a new food comes out that requires a crusty loaf, the cigar seems to be the one," said Rodrigue.

"The crust is the intense heat. The original cigar is steamed before baking, to give it a nice, thin, flaky crust. Whereas the split cigar is strictly heat in the oven, where you get a heavier crust."

He said he is often surprised at the amount of people that love a heartier crust to their bread, but suggests that classic methods usually produce the best results.

"It's made the old fashioned way. There's no shortcuts. It takes time."

LUNCH BREAK: The Conspirators are 'counting down the days'
0