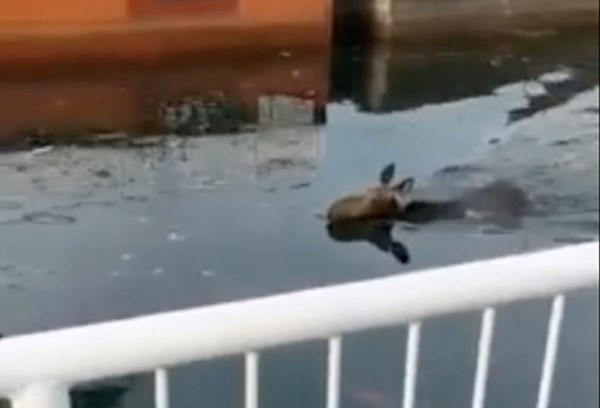 The Ministry of Natural Resources and Forestry believes the moose may have died of capture myopathy brought on by stress and exertion from swimming.

In an email to SooToday, ministry spokesperson Jolanta Kowalski said the moose was found dead floating in the St. Marys River shortly after 10 a.m. Tuesday.

"Capture myopathy occurs when overexertion or extreme stress causes physiological imbalances that result in severe muscle damage and even death," said Kowalski via email. "In this circumstance, capture myopathy likely led to drowning."

Department of Fisheries and Oceans staff were working in the area and were able to bring the dead moose to a local marina, where it was loaded in a truck and taken away.

Parks Canada has confirmed the moose that became a hit on social media by being locked through the canal Tuesday has died.

In a statement issued to SooToday Wednesday, Parks Canada reports that staff at the Sault Ste. Marie Canal National Historic Site initially discovered the moose swimming in the upper approach of the recreational lock at 7 a.m. The Ministry of Natural Resources and Forestry (MNRF) was made aware of the situation.

The moose cleared the lock and lower approach by 8 a.m. and swam to a nearby island before re-entering the St. Marys River.

A Fisheries and Oceans Canada crew working in the area was tasked with removing the moose from the river.

A spokesperson for Parks Canada told SooToday Wednesday that to his knowledge, the moose did not drown.

SooToday has reached out to MNRF for clarification.