Near North board bans lunch lady from all school properties, threatens police action

Botting doubled down by banning her from all school properties, including playing fields and parking lots, and threatened her with calling the police if she did
0
Sep 20, 2019 7:54 AM By: Jeff Turl 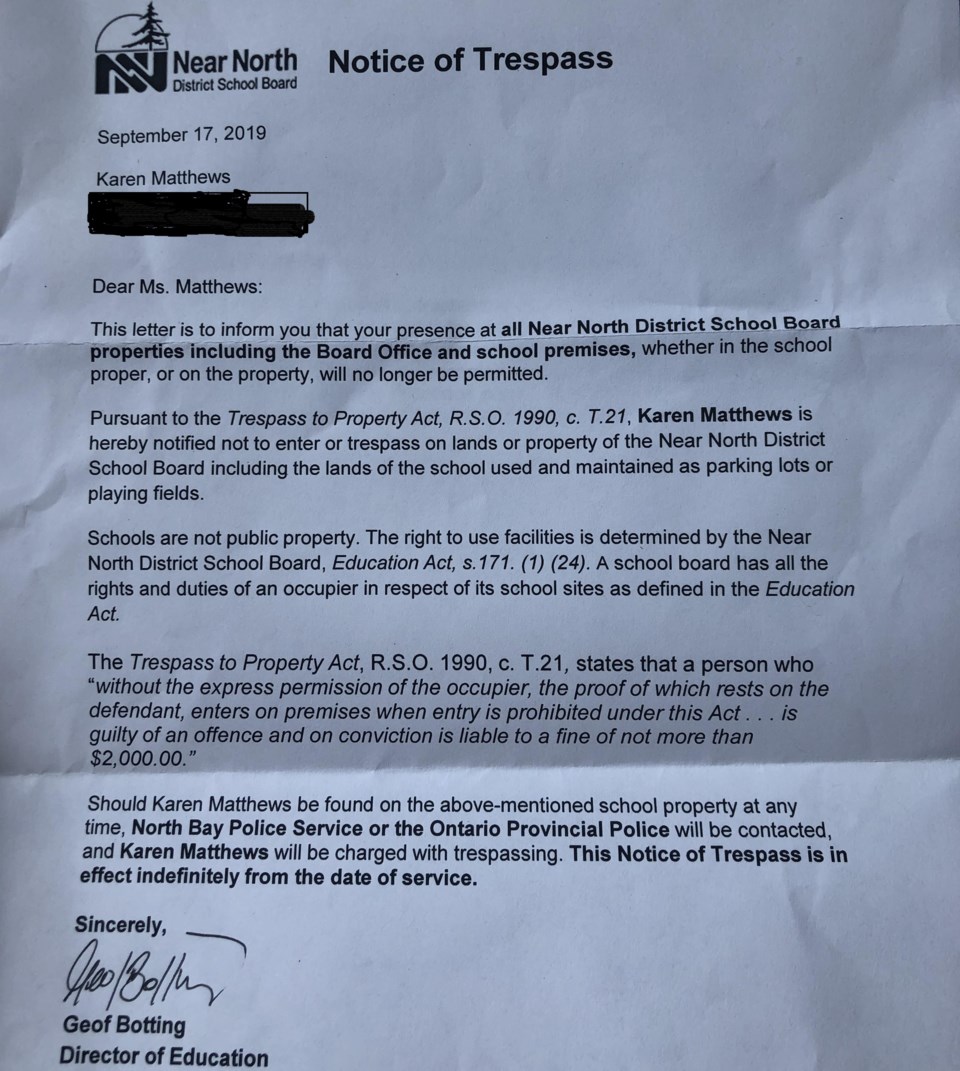 Karen Matthews is banned from all school board property.

NORTH BAY — The Near North District School Board continues to hammer a part-time lunch supervisor, banning her from all school properties and threatening to call the police if she disobeys.

Karen Matthews got a letter from Director of Education Geof Botting earlier this week, firing her from her daily 90-minute job as a lunch lady at Vincent Massey Public School.

He has now doubled down by banning her from all school properties, including playing fields and parking lots, and threatened her with calling the police if she did.

See: Lunch supervisor fired for speaking up at school board meeting

It all comes after Matthews tried to make a presentation concerning consolidation of high schools at a board meeting earlier this month.

See: School activist faces roadblock in making a presentation to board trustees

The board says Matthews isn't allowed to speak publicly as she is an employee and that breaks their bylaws, something Matthews disagree about.

The letter today is dated the same as her termination letter and was delivered by courier.

Matthews has an 11-year-old son attending Vincent Massey so it effectively bans her from watching her son participate in school sports and activities. It also prevents her from contributing her service as the chair of the school's parent council.

She can't attend an open house tonight where her son is working at a bake sale and it means Matthews also can't meet his teacher.

Matthews believes the board has gone overboard.

"I'm fairly certain that people that have been removed from the board or are off on leave for a number of reasons, some of which are criminal, to my knowledge I don't believe this has happened to anybody else. This is just vexatious on their part. It's rather surreal that one person can have such a horrible feeling of vengeance to another person that they would go to to an extreme such as this."

Matthews told BayToday that she's no longer shocked by anything this Board does.

"I don't put anything past them but I was astounded, it was surreal that this is the step that they would take, termination is not enough. I think it's them trying to add insult to injury, but they've fallen short, that's not going to happen because they are wrong in this."

She feels it's a personal vendetta by board chair Jay Aspin.

"The fact is that there is a witness who overheard Jay Aspin say that I would lose my job over this (her presentation)."

Aspin has deferred comment to Botting, who has said it is a personnel matter and won't discuss it.

Matthews has called a lawyer and now needs to scrape together the upfront consulting fee.

She's had plenty of public support though.

"It's been amazing. Various community leaders that are just as shocked as I am that the Board would go to such lengths, and it's a slap in the face of democracy. These are elected officials and it's really petty."

Frost advisory in effect for Greater Sudbury and area
0