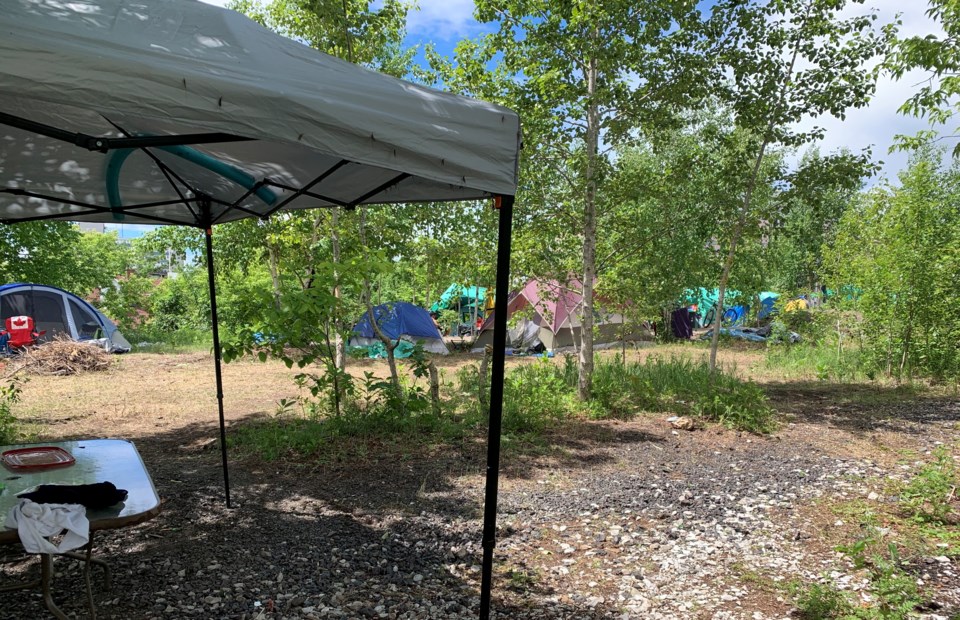 NORTH BAY — A North Bay woman and her niece are bewildered over the lack of support they have received when it comes to their COVID-19 positive family member.

Their family member, who goes by the name Randy, is a local homeless man who was living in the Tent City on Third Avenue and recently tested positive for COVID-19.

The woman says Randy, was sent to a local hotel where he was supposed to stay in isolation and was being monitored by staff at the facility.

His sister says Randy used to work for more than 20 years at the City of North Bay and ended up losing his job due to some personal issues that led him down the path of drug and alcohol abuse with heroin as his drug of choice.

"He was a viable citizen and worked for the city for 25 years and he had some personal things that happened in his life and he started drinking and doing drugs," said his sister.

The 63-year-old has now been homeless in North Bay for the past two years.

However, on the weekend the sister got word that Randy had left isolation and had decided to go shopping into a handful of stores and even a restaurant.

While Randy may be a relative, his sister and his niece both work in the health care field, so they realize how dangerous and irresponsible it was of their relative to leave isolation while he was contagious. She says Randy also was not wearing a mask while in the stores.

When his sister was told that someone had seen him leaving the quarantine she got in her car to try to find him.

"I caught up to him and told him he needed to go back to quarantine, and as soon as I say that, he is mad at me," the sister stated.

"In that conversation, he tells me that he is COVID-19 positive."

After that, the family attempted to call the North Bay Police and the Health Unit, and they were referred back to the isolation facility.

"Police do not have the authority to enforce self-isolation. As this is a public health matter, the dispatcher correctly directed the caller to the Health Unit," stated David Woolley, Corporate Communications Officer with the North Bay Police Service.

"They can come and go as they like, and that is not right and that needs to be fixed," said Randy's niece about the loose isolation rules.

Randy's family feels that rules are being made but no one wants to police them.

"Randy was high but he knew exactly what he was doing because he would not have reiterated to me that he was COVID-19 positive," his sister added.

The Health Unit responded to the concern regarding Randy breaking his COVID-19 self-isolation.

"It is important to highlight that some individuals face complex barriers that make it difficult for them to successfully self-isolate," the Health Unit stated in a release Friday afternoon.

"The Health Unit is working with community partners to put measures in place to support self-isolation for individuals who have complex needs such as lack of housing, and mental illness, amongst other challenges. The self-isolation site is a service being provided to assist individuals with self-isolation, it is not a detention centre. Individuals cannot be held at that site against their will.

"There has been a massive community effort to bring social and health services within the isolation site, to increase compliance with self-isolation requirements. The Health Unit is also facilitating pop-up COVID-19 testing and vaccination clinics for those who would normally have difficulty accessing these services," the release continued.

"The Health Unit cannot release information about individual cases, nor can the Health Unit alert the public each and every time a risk of exposure in the community has occurred. This is why the Health Unit continues to urge the public to continue to follow public health measures such as wearing face-coverings, physically distancing, washing hands often, coughing or sneezing in your sleeve, getting vaccinated, and seeking testing and self-isolating if you feel unwell."

The family gives credit to Jeff Lebrun from Boots on the Ground and Chris Brown, who was managing the Tent City, for helping them become aware of their brother's situation.

The sister says Randy was seen walking around downtown North Bay as recently as Thursday.

They are not sure if Randy is asymptomatic or if he is feeling sick from COVID-19.  They also have not been able to find out if Randy has received a COVID-19 vaccine yet.

Now, the family just hopes that Randy does not pass on the virus to anyone else.

Cloudy day with showers and the risk of a thunderstorm
0