David Belrose's new memoir details his life and work in the LGBT community in Thunder Bay.
Sep 13, 2016 8:12 AM By: Doug Diaczuk 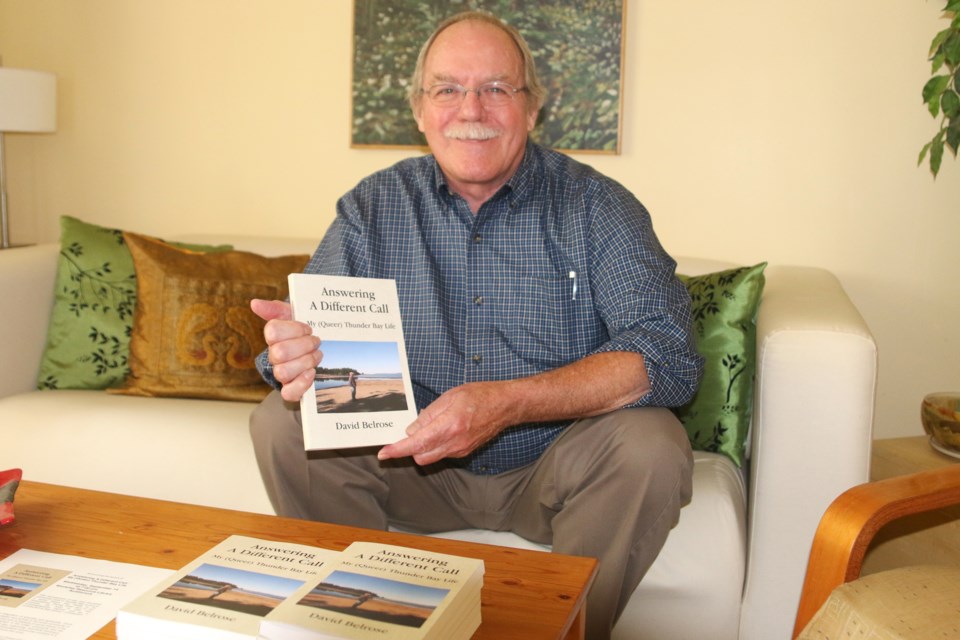 David Belrose will be launching his new book, Answering a Different Call: My (Queer) Thunder Bay Life on Wednesday at the Waverely Library at 7:00 p.m. (Photo by Doug Diaczuk - tbnewswatch.com)

A local author and activist hopes a new book will inspire others to share their stories of helping to create a stronger LGTB community in Thunder Bay.

Belrose calls the book an autobiographical memoir that details his experiences growing up as a gay man in Thunder Bay and the evolution of the LGBT community in the city.

“I’ve been involved in the community for many decades,” Belrose said.

“I decided that it was time to share that history with people. It seems that the development of gay and HIV/AIDS community work is part of the social history of Thunder Bay that needs to be remembered. And having been a part of that process for such a long time, I hope that this memoir will be a contribution to that history.”

Belrose said that as a teenager he was in denial about his sexuality. It wasn’t until he left Thunder Bay and travelled to Toronto for university that he became aware he was a gay man.

After graduation and four years serving in the military, Belrose returned to his hometown in 1971.

“By that time I came to terms with who I was as a gay man and needed to start to find people and find a community or even try to develop a community in Thunder Bay,” he said.

Belrose was instrumental in establishing an LGBT community in Thunder Bay.

He started the first gay organization at Lakehead University in 1974, was involved in establishing Gays of Thunder Bay, the first LGBT community organization in the city, participated in the local television series Thunder Gay Magazine, and helped develop the HIV/AIDS Committee of Thunder Bay.

“By the time I became aware of the fact that I was gay and moved back to Thunder Bay, it was a long and slow process to work on the development of the community,” Belrose said.

Seeing how far the city has come with embracing the LGBT community makes Belrose extremely proud, no matter how much work it took.

“In 2011, when the first Thunder Pride week was held, it was quite an emotional moment for myself and a number of others who have been around for such a long time, to see a pride flag raised at city hall,” Belrose said.

“I think the city has come a very long way. Obviously there are still elements that are still hostile to LGBT issues, but there really is no comparison to the way it was back then.”

Belrose said that the motivation for writing the book came from the fact that LGTB history has largely been ignored in the past.

“My idea was to at least present material that would be a history so it couldn’t just disappear,” he said.

But he is also hoping that his book will spark a new generation of writers and activists and pioneers to share their own stories, so none of the history is left in the dark.

“I hope that other people who have been involved will read the book and say that there may have been things that I missed in this and do some writing of their own and share their stories,” Belrose said.

Belrose will be having an official book launch on Wednesday at the Waverely Library at 7:00 p.m. The event will include a reading, signing, and copies of the book for sale.