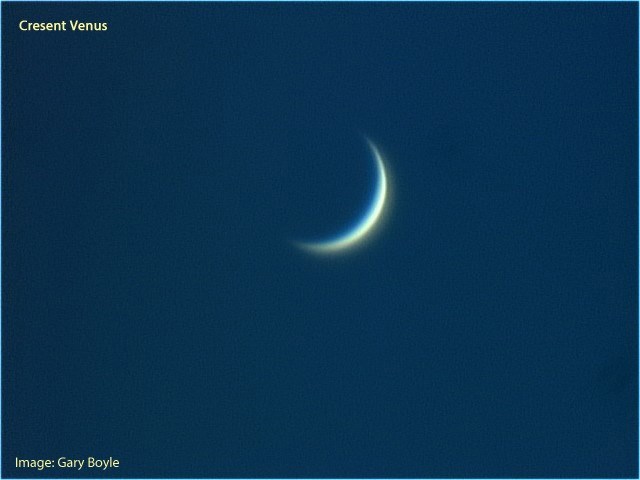 Throughout history, keen skywatchers would follow the weekly and monthly movement of bright objects against the background sky. The early Greeks referred to the planets of our solar system as the “wanderers” and there are five which can be seen and followed with the unaided eye.

The planet Venus is now seen high in the western sky shortly after sunset. Other than the moon, Venus is the brightest night-time object and for good reason. It is completely surrounded by thick clouds comprised of carbon dioxide and reflects about 75% of the sunlight that falls on them.

On a moonless night out in the dark countryside and away from any light source, this beacon will cast a shadow on a sheet of white paper. It can also be a great subject for astrophotography.

However, what goes on under the clouds is something out of a science fiction novel. Thanks to its 50 to 75-kilometre cloud deck, pressures at the surface are 90 times that of earth. That is comparable to being a kilometre under the ocean or in a car crusher. It rains sulphuric acid (battery acid) that never reaches the ground.

The clouds also produce the greenhouse effect, trapping the solar energy and locking it in. This keeps the day and night side a toasty 400 degrees Celsius and is so hot you could cook a large pizza in 9 seconds. It is safe to say human astronauts will never visit the Venusian surface.

However, in 1970 the Russians launched Venera 7 and became the first of its kind to land on another planet. The craft only lasted about 50 minutes but opened the door to the planet’s hidden secrets. Today, X-ray images pierce these clouds to reveal its landscape and volcanoes that still seem to be erupting.

Venus along with Mercury are termed interior planets as they reside inside earth’s orbit. It takes only 224 days for Venus to circle the sun and takes on different phases when viewed through a telescope, much like we see with the moon as more or less sunlight illuminates its surface.

On March 1, Venus was only illuminated by 62 per cent. It reaches its farthest point from the sun on March 24 and then begins to move lower to the horizon.

Over the next few weeks, the planet will position itself between the sun and earth. Following this progression through a telescope, you will notice the planet growing in size as it moves closer to us but shrinking in illumination. On April 3 it will be located in the Pleiades Cluster and on the night of May 21 and 22, teams up with Mercury low in the northwest sky but will be a thin 4 per cent lit crescent.

Known as “The Backyard Astronomer”, Gary Boyle is an astronomy educator, guest speaker and monthly columnist for the Royal Astronomical Society of Canada.Follow him on Twitter: @astroeducator or his website: www.wondersofastronomy.com