Short-lived wildflowers bring joy and hope when both are needed

Adding a splash of colour to the woodland floor, these ephemeral wildflowers are examples of a fun find when you are out on an early spring walk
Apr 5, 2021 8:34 AM By: David Hawke 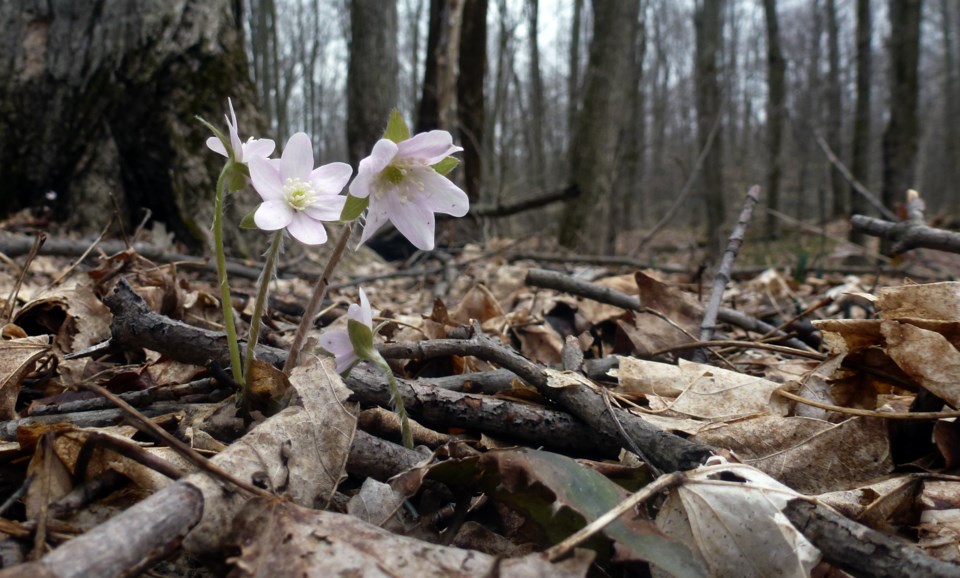 This is a Hepatic, part of a group of wildflowers called ephemerals, that bring joy and hope at a time that both are needed.David Hawke/OrilliaMatters

Spring has been sprung upon us and a number of natural things are happening right on cue. One of these events is the appearance of the spring ephemerals, that small group of wildflowers that bring joy and hope to folks like me who are not what you would call “winter people”.

If something is called ‘ephemeral’, as these flowers are, it means short-lived. Meltwater ponds within a forest are called ephemeral pools as they disappear within a short time after forming. Mayflies live as an adult for about 24 hours, and are in a Class of insects called Ephemoroptera. Ephemeral: now you see them, then you don’t.

Therefore, the spring ephemerals of the wildflower world include coltsfoot, hepatica, fawn lily, leeks, spring beauty, white trillium and red trillium. Actually leeks should not be on this list as they don’t bloom until much later, but their sought-after leaves are one of the first greens on a forest floor.

Adding a gentle splash of colour to the woodland floor, hepatica and spring beauty are examples of a fun find when you are out on an early spring walk. And the natural pollinators love them too as often these are the only blossoms to be found for another month.

Don’t be fooled by this soft-sounding label, all ephemeral species are hardy perennials and have been waiting all winter to spring forth.

As the snow melts and the length of the daylight hours increases, the roots churn into action and send up their little shoots. Their growth is sometimes stalled as for a plant to grow it must be greater than five degrees Celsius; lower than that and they just sit there.

Once shoved topside, the new shoots are now in a race, competing against time, temperature and the emergence of the tree leaves.

Once those maple or oak leaves unfurl and their shadows are cast upon the forest floor… the sun-loving pollinators will no longer visit.

So it’s grow, grow, grow! From the first blossom popping open to the last flower withering may span only a couple of weeks for some species. It is indeed a race to produce those seeds.

Hepatica are fairly common in a hardwood forest, their pale-coloured blossoms being pink, blue or white. Actually (for all you botany nerds) the petals aren’t really petals, but rather are sepals.

I know, who cares, but some folks do and you should be aware that not everything is as it first appears, especially in nature, especially in botany. So I stand corrected: the pale-coloured sepals are pink, blue or white.

Whatever. They are there, they are blooming, and they are a great find. Enjoy them for either their petals or their sepals. Can we move on to something else now?

The leaves of the hepatica appear as three large lobes and tend to be somewhat mottled in appearance. This configuration used to mean something, if you subscribed to the Doctrine of Signatures. This Doctrine originated in central Europe way back in time when folks thought the earth was flat and the sun spun around us.

The Doctrine of Signatures laid out that if a plant looks like something then that is what it is good to cure. If the leaves looked like a palm with fingers then it must be good for arthritis; or in this case if the leaves were three-lobed and looked like liver, then that’s what it should be applied to.

Hepatica is a name based on the ancient Greek which was hepatic meaning liver. Okay so it looks like a liver, and is called liverwort, so it must be confirmed that this is good to go for liver ailments! Um, not so fast.

Within Charlotte Erichsen-Brown’s book, Use of Plants for the Past 500 Years, she found that in 1681 a recorded note by the famed botanist Culpeper stating that hepatica is, “a singular good herb for all diseases of the liver…if bruised and boiled in small beer… and helps the running of the reins in men and the whites in women.”

I have to admit that I know neither what the ‘running of the reins’ nor the 'whites in women’ really means but it does sound impressive.

Although this plant was dismissed from the United Stated Pharmacopeia in 1892 as ‘balderdash’ it continued to have some popularity up to 1955 and beyond. Some doctrines die hard.

This year the hepatica which grows in our woodlot has produced blooms a good two weeks ahead of last year’s first blooming date. Keep your eyes open for spring beauty, fawn lily and the first blue cohosh.