Company says the situation is under control. A public open house meeting takes place on Wednesday in Gogama
Sep 13, 2016 11:00 AM By: Andrew Autio, freelance
Previous Next
1 / 1 CN Environmental Officer Aaron Stadnyk (left) and a fellow CN employee who did not identify himself speak at city hall. Andrew Autio for TimminsToday
Expand
Previous Next

With much speculation surrounding the state of the waters flowing north into Timmins, two representatives from CN appeared at city hall on Monday evening to soak up concerns.

Mayor Steve Black had requested an appearance by CN to provide an update on the cleanup efforts on the Makami River near Gogama. He said he'd received inquiries from residents in Timmins, as well as Gogama.

On March 7 of 2015, an eastbound CN train carrying crude oil in 35 cars jumped the rail and spilled into the river, which burst into flames just 3 kilometres from town. No injuries were reported and no evacuation was needed.

Many residents of Gogama, and local Fire Chief Mike Benson, have been frustrated by the efforts of CN to repair the damage to the local environment ever since.

A public open house meeting is taking place on Wednesday evening in Gogama, which will include members of both the provincial and federal government.

Aaron Stadnyk, a CN Environmental Officer, ran through the presentation.

"I've been on response here in Timmins since the day the derailment happened. I've been on site, basically since the beginning. I can assure you CN's level of commitment to this overall unfortunate incident," said Stadnyk.

He said that when the derailment occurred last March, CN 'basically responded immediately'.

"We basically had expertise, and a number of assets en route within hours. We took immediate measures to contain the oil within the Makami River. In fact, we had our first booms in place containing the oil likely in under 8 hours" he said.

CN then went into a 'comprehensive environmental investigation' of the area.

Stadnyk said a large portion of the crude oil spilled during the derailment is thought to have burned off in the ensuing fire which was active for 3 days.

"The rest of that material that could be salvaged, was transferred off-site as soon as it possibly could be. Then the remaining of that crude oil material is now believed to be removed from site."

He said remedial efforts by CN included a 'very large' excavation project, as well as a 'very in depth' collection project.

"Currently, we are looking at our analytical data, and we believe, and the data speaks for it, that there is a very small, if not residual amount of oil that still remains at the site," said Stadnyk.

In Timmins, there has been some concern for the potential impact on the city's drinking water, as the waters from the Gogama area eventually make their way into the Mattagami River. Residents throughout the region have expressed concerns about the spill's effects on fish and other wildlife.

"We are committed to Gogama, and we take all of those concerns very, very seriously. Following some of the communications of these concerns, not only just from the citizens of Gogama, but Mattagami First Nation as well, we established an additional sampling program to go out and specifically address some of these concerns."

"Results have looked great. We've had no regulatory excedances basically since April of 2015," he said.

Those results were tested by a private government-accredited lab, said Stadnyk.

Councillor Andrew Marks, who also serves on the board of the MRCA (Mattagami Region Conservation Authority), said he has been watching the situation closely. He asked Stadnyk to elaborate on long-term remediation efforts by the company. 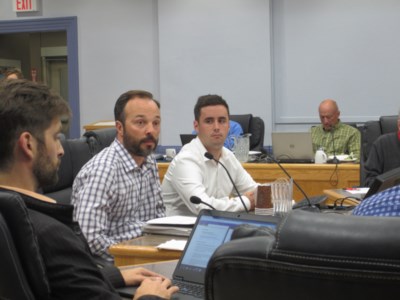 "By no means is CN walking away from this. We're here for the long haul and to basically ensure that we can bring the area back to a very similar, if not pre-existing condition," replied Stadnyk.

Councillor Rick Dubeau noted that the Director of the MRCA is 'very confident' that there is no danger to Timmins based on the safety measures put in place, and the distance from the city.

Councillor Noella Rinaldo thanked the CN reps for their work.

"Its been good for us here in Timmins, at the other end of the river. What you've contained has definitely kept it to a minimum for us, as far as our risk for our water source. I am curious as to what the people in Gogama have for you at the meeting on Wednesday. I hope we continue to see you there, I think the work will be there for awhile," said Rinaldo.

"We did tests, quite extensively, at the water filtration plant at the onset of the spill. We continued for several months. We coordinated our efforts with CN, as well with Mattagami First Nations, and Gogama, compared and shared our results," said Duval.

He said 'at some point in time' the testing stopped, as contaminants became undetectable. He added the he was 'very satisfied' that the water will be treatable and safe in the city of Timmins.

Any concerned residents in the region are welcomed to attend the open house meeting Wednesday evening at 5 p.m., at the Gogama Community Centre.