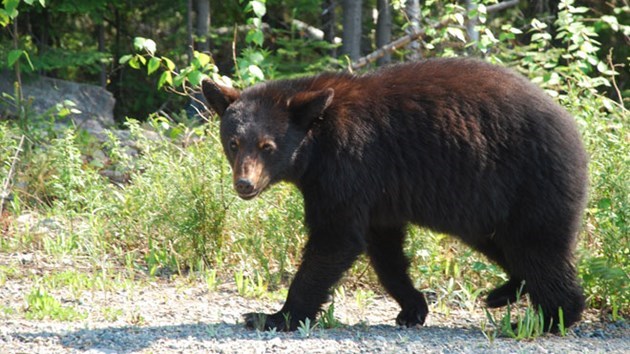 A woman was injured Oct. 1 when a startled black bear swiped at her says the animal was not attacking her. She simply startled it and it reacted. File photo.

A bear attack reported Friday morning wasn't really an attack says the victim on the receiving end of a swipe from a startled bruin.

"I walked around the corner of the house and came face to face with it," she said. "I startled it."

Emily, who wants to remain anonymous, said the bear just swiped at her, it didn't stand up or charge her.

And it wasn't dark.

Both Emily and the bear were bathed in the full light of the motion-triggered lights that were on when she left the house to go get in her boyfriend's car and ran into the bear.

"I went outside and walked past the corner of our house, which is about six feet from our door," she said. "I did hear a small rattling noise, like maybe there was a squirrel in one of the bins or something like that."

When she walked by the corner where the family's empty garbage bins are Emily startled the bear, which took a swipe at her.

"The bear was not standing up. He jumped a bit in shock and swiped, then ran off into the field," she said.

Bears are common in Emily's neighbourhood so her family doesn't put garbage out in the bins until Wednesday mornings, garbage day, and Emily didn't expect a bear to be inspecting the bins.

She emphatically maintains that the bear did no wrong and doesn't need to be destroyed. If anything, she would rather see it relocated.

"I was not bothering the bear or trying to get near it," Emily said. "I know that, if the bear had intended to hurt me, he would have done a lot more."

She did see the bear long enough to recognize it as a regular to the neighbourhood.

The family garbage cans probably have some residue of food smells in them and the bear was probably just checking to see if anything was in them when she surprised it, the woman said.

Her wounds required medical attention. The hospital notified police and police notified the Ministry of Natural Resources and Forestry about the incident.

COVID-19 cancels biennial event celebrating all things Manitoulin
Oct 20, 2020 1:00 PM
Comments
We welcome your feedback and encourage you to share your thoughts. We ask that you be respectful of others and their points of view, refrain from personal attacks and stay on topic. To learn about our commenting policies and how we moderate, please read our Community Guidelines.

About the Author: Carol Martin

Carol has over 18-years experience in journalism, was raised in Sault Ste. Marie, and has also lived and worked in Constance Lake First Nation, Sudbury, and Kingston before returning to her hometown to join the SooToday team in 2004.
Read more