Parents of students attending Superior CVI are making final appeals to Lakehead Public School Board trustees, whose administration has recommended moving the school's students to Hammarskjold High School.
Sep 14, 2016 8:13 AM By: Jon Thompson 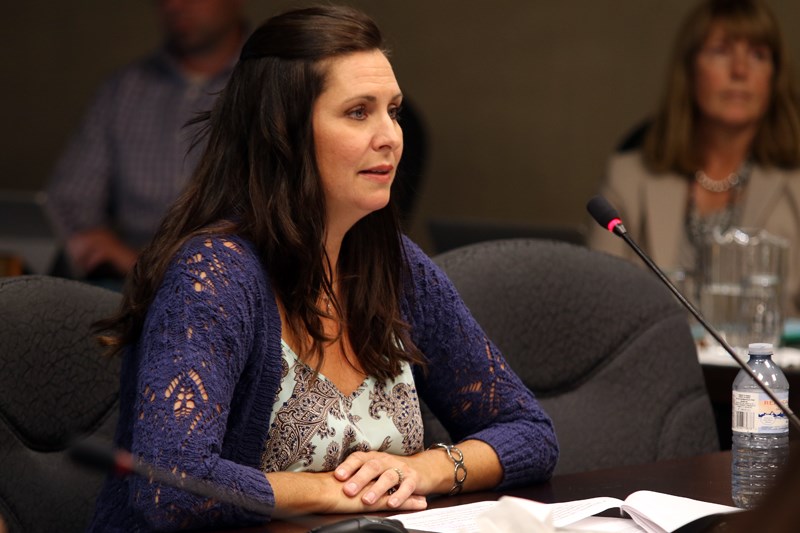 Superior CVI School Council chairwoman Susan Reppart makes a deputation to the Lakehead Public School Board on Tuesday, asking trustees to vote against administration's recommendation and not close the school, which was opened in 2009.

THUNDER BAY -- Only weeks remain before Lakehead Public School Board trustees will cast votes that will shutter local schools and parents have begun making their final appeals.

The board will decide whether to close Hammarskjold High School or Superior Collegiate and Vocational Institute on Oct. 4. In June, board administration recommended Hammarskjold become the north side’s only public high school and that Superior be repurposed for elementary students telescoped from three closing schools.

Over Tuesday and Wednesday, six parents of students enrolled at Superior are making deputations urging trustees to vote against the grain.

Superior CVI School Council chairwoman Susan Reppard delivered the first of those deputations on Tuesday in an impassioned plea to save Thunder Bay’s newest high school.

Reppard’s two daughters attend Superior, one of which is retuning to complete her academic credits this year after receiving a high skills major diploma in welding. It’s an experience her mother says she couldn’t have received anywhere else.

“Less than 10 years ago the ministry, the trustees, the board, worked very hard and were dedicated to providing our children with the most incredible and life-changing gift,” she said.

“This school has enhanced and provided our children with more unique opportunities than any other facility could in Northwestern Ontario. That is why, for this gift to be suddenly be taken away from our children, it’s very devastating.”

From the school’s tournament-sized gymnasium to its auditorium, theatre space and even a green room, Reppard argued Superior would be ill-suited and even dangerous for elementary students. She declared demolition would undo ventilation, gas and other technology that was built into the structure, only to have to rebuild at Hammarskjold, which was constructed in 1962.

Board vice chairman George Saarinen said he and his colleagues are far from having reached a final decision and they appreciated hearing the views expressed in the deputations.

“They are of great merit and I think the work that has gone into the deputations from the various groups and school councils. And as you see, there were a lot of questions from trustees tonight. Great value, I would say.”

The board will hear four more deputations from parents of Superior students on Wednesday evening at the board office. A final report will come due on Sept. 27 and that decision will be ratified Oct. 4.