Supporters influence council to change its mind on the increasingly popular event
0
Apr 14, 2016 12:04 PM By: Andrew Autio, freelance
Previous Next
1 / 1 Photo by Andrew Autio for TimminsToday
Expand
Previous Next

It was a presence that Captain Jean Luc Picard would be unable to ignore, let alone the members of Timmins city council.

A group of Klingons and several other mysterious creatures filled the chambers to show their support of the Northern Ontario Expo on Monday night.

Rental fees for the Archie Dillon Sportsplex were waived by council. This move will cost the city $4,294 out of the rapidly dwindling 'Grants to Organizations' account.

The expo - think Timmins' answer to ComicCon - takes place on May 7-8, and will feature a 1966 Batmobile, as well as Marina Sirtis of Star Trek: The Next Generation.

Jason Denis, the President of the expo, elaborated on the organization and its history. He emphasized they are a non-profit organization. He added that in 2015, it became evident that the event had outgrown its usual space in the McIntyre ballroom, due to increasing interest and attendance numbers.

"We knew that if the event was to continue to flourish, a larger venue was obviously required" said Denis.

He did his best to clear up a lot of what he called 'misinformation' that council discussed last week. He also parlayed some strong reaction from the organizations Board of Directors, supporters and sponsors regarding last week's council discussion on the expo.

"What we all watched and experienced last Monday was truly an embarrassment, unprofessional conduct from city elected officials, and a total lack of respect towards a volunteer based group trying to bring new events to the city of Timmins. We understand that this type of event is not for everyone. Our opinion is that, as elected officials you should at least keep an open mind to new things that could bring people to our city, even if you do not understand or like the event," read Denis.

"The unprofessional behavior from some council members last week clearly showed us that is not the case, and obviously have their own agendas. To publicly humiliate, make fun, disrespect, and belittle our event could have long-lasting effects on how potential volunteers, guests, sponsors and partners view the Northern Ontario Expo. We are helping our local economy by having people stay in our hotels, eat in our restaurants, shop at various locations throughout the city, to us, this is no joke," he added. 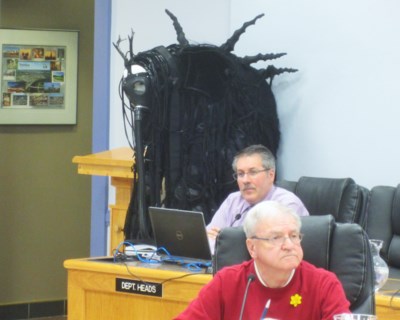 A mysterious creature cozies up to Director of Public Works and Engineering Luc Duval. Andrew Autio for TimminsToday

"These are the guys walking around in Star Wars outfits? Is that what this expo is about?

After some chuckling from other councillors and city department heads, Campbell finished by saying "I rest my case."

Black told Campbell at the time "It is a well attended event that is a success in the community."

Councillor Rick Dubeau said he was not very familiar with the Expo, but acknowledged that it is a popular event. He also said he wished it wasn't on the same weekend as The Sportsman show.

After Denis' strong words on Monday, Black took it upon himself to make amends on behalf of all of council.

"For the comments that upset your members, I do apologize" said Black.

Campbell also replied directly to Denis and his supporters.

"Last week, I didn't know a whole lot about what you were about. We had a two page document that told us absolutely nothing about what you were going to do. I personally don't have a hidden agenda here, I will support any group that gives back to the community. If this had been brought forward last week, my thoughts would have been totally different. I just want that clear," said Campbell.

Councillor Andre Grzela, having done his own research, said he sees this as a major opportunity for the City of Timmins, not only this year, but going forward as well.

"As a corporation, in my opinion, the sooner we embrace what Northern Ontario Expo has to offer, the better," he said, noting massive attendance numbers for similar conventions in other cities.

"We're far behind, in Northern Ontario, when it comes to this kind of event. Its a world in its own." said Grzela.

When it came time for the vote, Councillors Mike Doody, Pat Bamford, Walter Wawrzaszek, Grzela and Campbell voted in favour of waiving the arena rental fees entirely. Councillors Rick Dubeau, Noella Rinaldo, and Andrew Marks were not in attendance.

Your spring cleaning can support cancer care in the north
0