Police have seized nine firearms, more than $1 million in cash and close to $1 million in street value of drugs within the last year.
Sep 11, 2018 8:03 AM By: Matt Vis 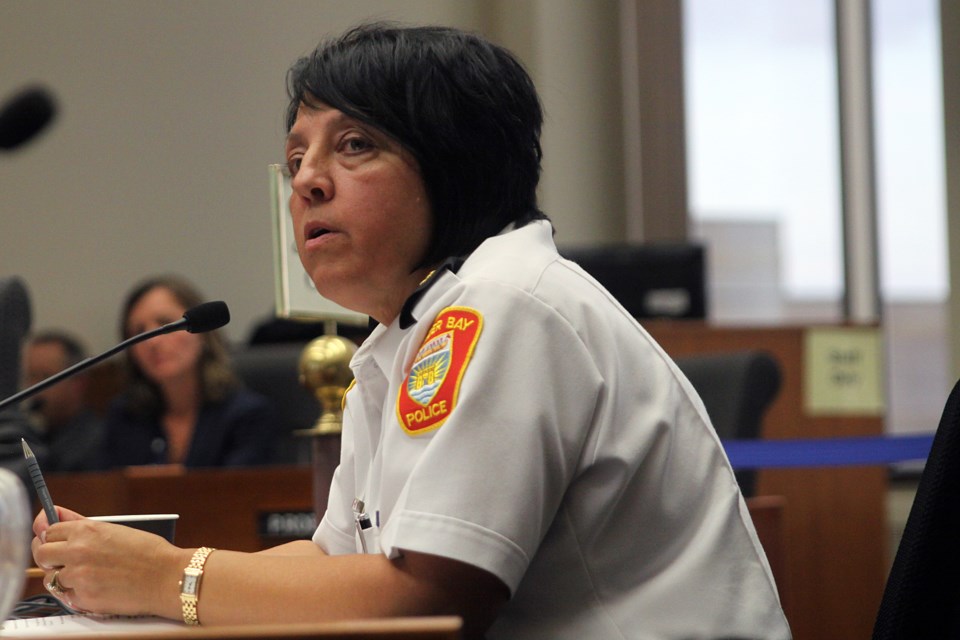 Thunder Bay Police Service acting chief Sylvie Hauth on Monday night provided members of Thunder Bay city council with a presentation on policing in the community, as part of a revamped communication protocol between the force and municipal leadership.

Hauth said there has been an influx of gang members from the Greater Toronto Area and Ottawa arriving in Thunder Bay, bringing escalating criminal activity and violence along with them.

“We are concerned of the gang-related activity and are dedicated to eradicating these groups from our community,” Hauth said. “We have increased our patrols to be more visible in high-risk areas and we are working with other partner agencies to coordinate information and ensure successful warrants in execution and arrests.”

The presentation noted that 52 people from southern Ontario and western Canada have been arrested by the police service’s gangs and guns unit in the last year, resulting in the seizure of nine firearms, more than $1 million in cash and drugs with a street value of nearly seven figures.

Late last month, police were involved in a 26-hour standoff in the Windsor Street area involving a 36-year-old Toronto man who had prior warrants and is now facing multiple gun-related and drug trafficking charges.

Police believe a shooting in the same area a few weeks earlier where bullets were fired into a home with parents and three young children was gang-related but targeted the wrong residence.

A Ruttan Street bust in June turned up more than $600,000 in cash, along with four firearms, resulting in charges against one man from Hamilton and another from Edmonton. A March seizure at a South Cumberland Street apartment yielded what was described as the force’s largest crack cocaine haul, which led to charges against four suspects from the Greater Toronto area and one from Thunder Bay.

Getting those suspected gang members off the street has not seemed to stop the flow of travelling criminals, Hauth said.

“Due to the lucrative nature of the drug trade in Northern Ontario, gang members coming to Thunder Bay are replaced as fast as they are arrested and incarcerated,” Hauth said.

“Thunder Bay is an opportunistic market and gang members prey on vulnerable people to gain access to their residence to set up shop.”

Hauth said she has appealed to Community Safety and Correctional Services Minister Michael Tibollo to help, noting that “guns and gangs do not respect borders.”

“No, I don’t have all the resources,” Hauth said. “We have to prioritize based on what we currently have in terms of complement and you see where we are currently putting all of our eggs in one basket to address a vast gamut of various issues in our community.”

Hauth also said police have worked with local hotels to educate staff to recognize signs of human trafficking, as well as looking at other businesses and services that could encounter victims.

The presentation painted a picture of a police force that is increasingly busy tackling persistent crime issues. The city’s crime severity index score for the last five years has routinely outpaced both the provincial and national rates, though Hauth said those numbers are heavily weighted by homicides.

The city has had four homicides thus far in 2018, including two within the past month.

Responding to a question from Coun. Aldo Ruberto, Hauth said officers grow frustrated when people who have charges working their way through the court system are released and commit more offences.

“People are found, charged, arrested and brought before the courts and often they are not kept in custody or if they are they are released on conditions shortly after and often do recommit similar offences,” Hauth said.

“We do our job diligently. We continue to do so but we are concerned that the justice system often does release and we see ourselves in a position to deal with the same individuals over and over.”

About the Author: Matt Vis

Born and raised in Thunder Bay, Matt is honoured to tell the stories of his hometown.
Read more

Letter: There’s a misconception about how St. Joseph’s Villa is funded
0