The last time the mayors of northern Ontario met, the main topic of discussion was hydro prices but today the focus of the Northern Ontario Large Urban Mayors (NOLUM) was the reduction of FedNor funding
Nov 3, 2016 11:57 AM By: Kenneth Armstrong 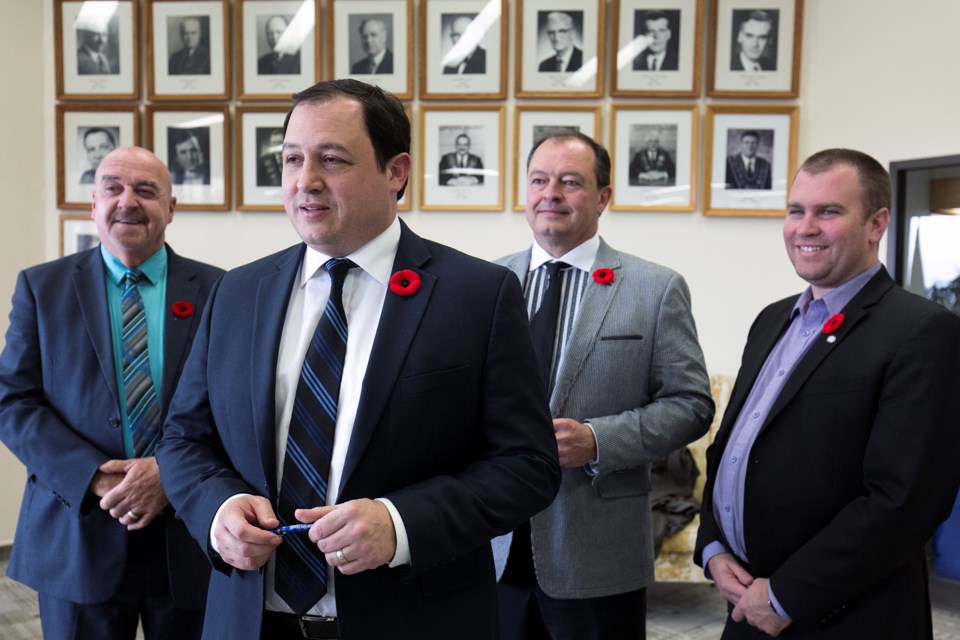 Mayors in northern Ontario want to see federal funding for economic development increased in the region, on pace with what the province provides.

NOLUM, the Northern Ontario Large Urban Mayors, held one of their twice-annual meetings today in Sault Ste. Marie, and FedNor was the main topic of conversation.

Christian Provenzano, Sault Ste. Marie’s mayor, said the group recently took a position on FedNor, suggesting the funding should align more closely with the Northern Ontario Heritage Fund Corporation (NOHFC), which is dealt out by the provincial government.

“(NOHFC) does a lot of great work in northern Ontario and we think it’s a model we can use to advocate federally and we would like to see FedNor partner more closely with the Northern Ontario Heritage Fund,” said Provenzano immediately after the meeting.

During today’s meeting, the mayor members of NOLUM — which includes Sault Ste. Marie, Sudbury, Timmins, North Bay and Thunder Bay — decided to ask to present their case for increased FedNor funding at an upcoming meeting of the federal Northern Ontario Caucus.

“Seven out of the 10 members (of parliament) in northern Ontario are government members. We think they would be very sympathetic to the position we have taken,” said Provenzano.

Ten years ago, the pot of money available fromFedNor, the Federal Economic Development Initiative for Northern Ontario, stood at about $76-million. Today it is about $31-million annually.

Through the NOHFC, the province invests about $100-million a year in economic development projects across northern Ontario.

North Bay Mayor Al McDonald said the group hopes FedNor will align its policies and funding closer to those of the province.

“If we can get both the provincial and federal agencies to work closer together, I think we are going to have greater success when it comes to job creation, growth and economic development in northern Ontario,” said McDonald.

Last year, the province invested $3.4-million through NOHFC toward film and television projects in North Bay, including $970,000 for building a post-production facility at Canadore College.

“(NOHFC) came to the table but FedNor did not, because they just didn’t have the money. You can imagine if they were at the table we could have moved a lot quicker on that opportunity,” said McDonald.

“We see them as economic drivers, probably more so than southern Ontario would see them. If we have the opportunity to keep a lot of the youth who are going to our colleges and universities in the north, and creating jobs for them then we would be able to grow northern Ontario,” he said.

Steve Black, mayor of Timmins, said eliminating the position is a mistake.

“There’s really no lead, no deputy minister for FedNor to have that voice at the table,” said Black.

When in the Sault for a funding announcement last month, Bains said he is the minister in charge and that FedNor is here to stay.

When NOLUM last met in June, energy prices was the hot topic for discussion.

Black said that issue was again discussed at today’s meeting.

“We have seen some movement in terms of at least a recognition from the (provincial) government that there is a problem (with energy pricing). We are still waiting to see what they come up with through the long-term energy planning that they are going through now,” said Black.

The group works well together, said Black, in advancing the common goals of the member cities, including job and population growth.

Although McDonald agrees there are opportunities for federal funding through various infrastructure grant programs, he believes FedNor would do a better job if more closely connected to NOHFC.

“You could make the argument that there is other funding available for specific little items, but if we are going to grow the north we have to create jobs and businesses in northern Ontario. A lot of that just needs the funding,” said McDonald.