Will citizens revolt over new schedule requiring us to take out our trash one day, our recycling the next?
0
Sep 10, 2019 8:14 AM By: David Helwig 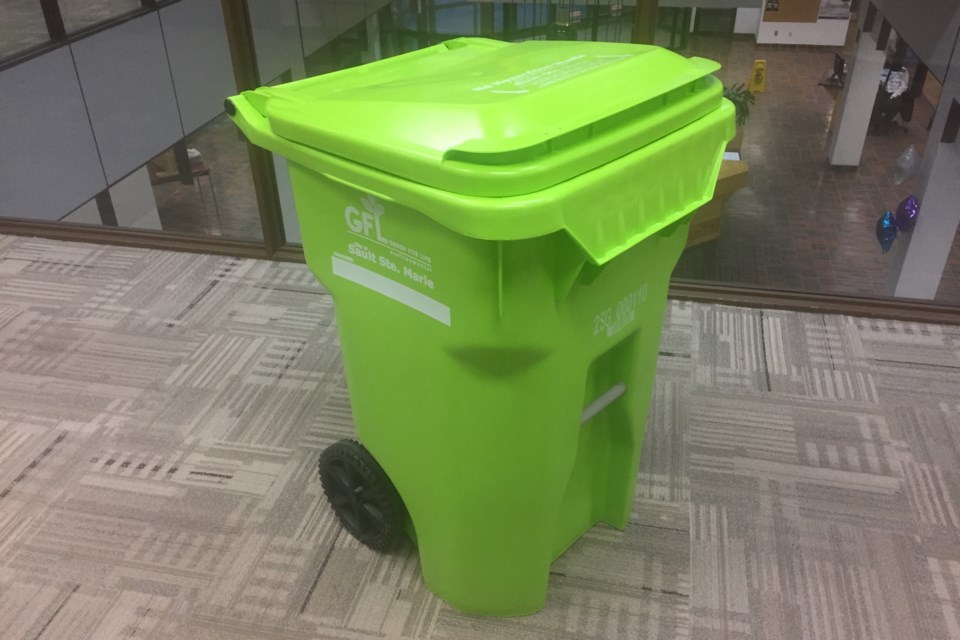 When the new trash carts were introduced in July, people bellyached about having no room to fit two big receptacles simultaneously at end of their driveway. Now, they're howling about having to take their garbage and recycling bins out on separate days. File photo by David Helwig/SooToday

SAULT STE. MARIE — Starting this winter, Saultites will be required to haul their garbage and recycling carts to the curb on separate days, city council narrowly decided Monday.

And Ward 4 Coun. Marchy Bruni is warning he's hearing from many residents who intend to give up recycling and just put everything in the trash.

"I've received many remarks. They're not going to use their recycling bins. They're just going to bring out their garbage once a week and that's it," Bruni told tonight's council meeting.

Councillors voted six-to-five tonight in favour of the new collection schedule, which is intended to be permanent but will be monitored by city staff to make sure it's working.

"I've heard a lot of feedback on this, most of the people angry," said Ward 5 Coun. Matthew Scott, pointing out that some other municipalities pick up trash and recycling on alternate weeks.

"There's no cookie-cutter model to this. You will look at every community and every place has a different solution," said Susan Hamilton Beach, the city's director of public works.

"Most often, the trigger for a biweekly cycle is the implementation of an organics waste program. If you're pulling those organics out of the waste cycle, it's quite easy and it makes perfect sense to go to biweekly garbage collection. We look forward, potentially, to that change in the future. The potential regulations are on the board. We would be looking at about 2025," Hamilton Beach said.

Ward 5 Coun. Corey Gardi supported the new collection schedule but also mentioned the possibility that some ratepayers may quit recycling.

"We're going to launch a quite concentrated campaign to educate the public as to the importance of recycling," said Hamilton Beach. "We certainly hope the responsible citizens of Sault Ste. Marie would continue to recycle as we do have a very effective program and we hope to keep the collection at the same rate."

"Up to this point, I've been getting a lot of emails saying do not change the current process," said Ward 1 Coun. Sandra Hollingsworth. "My ward is a lot of senior citizens and they do struggle taking out their bins, just for the garbage day. Now, they're going to have to take out twice a week. And we do have an aging population."

"It's not just the seniors. It's a lot of single moms. It's a lot of independent people that have some challenges that have to rely on their neighbours or others, and sometimes they can't. It's not so easy to bring these down two different days," Hollingsworth told the meeting.

"We've all had a lot of calls and emails about people being concerned about this change," said Ward 3's Donna Hilsinger. "One of the concerns is now I have to ensure two separate mornings that my driveway is clear enough for me to put the container there. Not just one day, but two days."

"I've only received one email complaint, zero phone calls, and the rest of the emails have been in support of this initiative," said Ward 2 Coun. Lisa Vezeau-Allen

"Keeping the system the way it is isn't going to work for a big chunk of the community. So it's our responsibility to find a solution," said Ward 3 Coun. Matthew Shoemaker. "There's never going to be a solution that pleases everybody. I think this is the least inconvenient solution for all people because the alternative is a system that just doesn't work for a big chunk of the city."

Ward 2's Luke Dufour also supported the new collection system. "For a hypothetical senior mom or senior who's having to clear space for a bin anyway, now they have to clear half as much space for the entire winter," Dufour said.

"People generally don't like change," said Ward 1 Coun. Paul Christian, who preferred sticking with the existing collection schedule for one year, to allow people to see how it works.

"We're not doubling the amount of snow that needs to be moved," Christian said.

Here's the new collection schedule that will take effect when the city starts enforcing winter control parking restrictions in November:

Mining watchdog expected to have a few choice words to say about ferrochrome smelters
Jan 27, 2020 10:30 AM
Comments
We welcome your feedback and encourage you to share your thoughts on this story. We ask that you be respectful of others and their points of view, refrain from personal attacks and stay on topic. To learn about our commenting policies and how we moderate, please read our Community Guidelines.