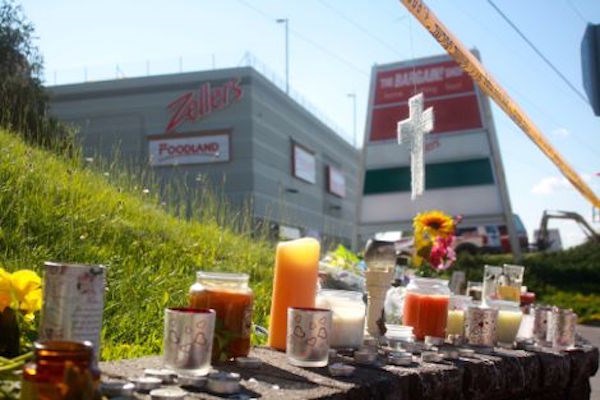 Candles are laid out at the scene of the Algo Centre Mall collapse in 2012. File photo

Robert Wood testified Friday that he didn't examine the beam — that eventually collapsed killing two women — during his 2012 inspection of the Algo Centre Mall, despite citing its damage in a report he prepared for the facility's owner 30 months earlier.

The former engineer, undergoing his third day of cross-examination by the prosecution at his trial in connection with the deaths, indicated he included two photographs of the beam in an Oct. 28, 2009 report detailing an inspection he had conducted of the Elliot Lake mall earlier that month.

Assistant Crown attorney Marc Huneault suggested that he included the photos because the beam, in terms of the erosion on the steel, was one of the worst areas he saw in his Oct. 5 examination of the mall.

But Wood said it was the beam with the most missing fireproofing, but "I wouldn't call it the worst," adding he believes he saw similar damage in the mall's Zellers store.

He then conceded that he hadn't observed any beams in worse condition than that one in 2009.

Huneault continued to press him about why he didn't "bother to go back" to examine that food court area beam that he had featured in his first report during his subsequent inspection in April 2012, weeks before the fatal June 23 cave-in.

"There was no leaking in the food court," Wood responded, explaining he hadn't looked at the beam because the fireproofing had been repaired.

Huneault suggested that all he had to do was to get a ladder or a lifting device to go up, push ceiling tiles aside and take a look, but he didn't do that.

"I didn't do that," Wood agreed. "I made a judgement, there was no leakage in that area and my time was better spent looking in other areas."

The Crown then asked if he realized an expert's report following the collapse indicated that a failure of a connection on that beam had killed two people.

"That's what it says," Wood replied.

Doloris Perrizzolo, 74, and Lucie Aylwin, 37, died on June 23, 2012 when a third-level rooftop parking deck collapsed onto the food court area and a lottery kiosk, where the younger woman worked and Perrizzolo was purchasing a lottery ticket.

Numerous people were also injured in the cave-in.

When Wood conducted the 2012 inspection from which he concluded the mall was structurally sound, he was no longer a professional engineer.

The Sault Ste. Marie man's licence had been suspended in November 2011 and revoked the following year for a matter unrelated to the mall roof collapse.

A former employee and owner of the now-defunct local firm of M.R. Wright, Wood testified Friday that his role in his 2012 work for mall owner Robert Nazarian was as an inspector, not an engineer.

He agreed that he had been advised by the owner that the bank was looking for updated structural and mechanical, electrical reports on the mall.

Huneault suggested that when he was retained he had been advised that the bank required engineering reports.

"I believe they were asking for a condition assessment," Wood said.

Superior Court Justice Edward Gareau has heard that Wood had the firm's manager Greg Saunders, an engineer, sign the report.

Wood's signature also was on the May 3, 2012 report, but as president of the company.

He agreed that he was "entirely responsible" for writing the report, and that he has no reason to believe that Saunders, who reviewed it, had made any changes.

Wood said that while he sat down with Saunders to review the report, he's not 100 percent sure, but doesn't think he showed him the company's file on the mall.

As well, Wood indicated he hadn't shown Saunders his October 2009 report or photos he had taken for it.

The court heard when Wood did his 2012 inspection he was accompanied by a mall maintenance employee and when they were in the food court area Wood said he asked why some ceiling tiles were missing.

The man couldn't give him an answer, Wood indicated.

"You didn't get a satisfactory answer, but you didn't go up there and check?" Huneault asked.

Wood replied that he could see the beams with the fireproofing and the underside of the parking deck with its insulation.

When the Crown suggested there were signs of leaks at the kiosk area, Wood responded "not that I saw."

Insisting that he hadn't been told there was leaking and hadn't seen any, he said he had chosen not take a closer look than what Huneault described as "a vantage point of 12 feet below the ceiling," because he had no reason to.

Huneault also showed him photographs an Elliot Lake resident had taken of the mall's exterior walkway on April 13, the day after Wood's inspection.

The photos, entered earlier in the trial as evidence, showed columns supporting the walkway, above which a number of the mall's structural elements come together.

The prosecutor pointed out that the pictures reveal corrosion and a post with a hole in it.

Wood said he didn't see a post with a hole in it because he hadn't looked at that side of the columns, but had noticed rust at the bottoms of the posts.

He agreed with Huneault that the photo of the hole showed enough detail to tell the pole is compromised and another picture showed what appeared to be significant corrosive activity.

Huneault asked where in Wood's report he had indicated that the posts holding up the walkway were showing these signs of corrosion.

After saying he may have taken a photo, Wood checked his report and indicated it wasn't there.

Huneault expects to complete his cross-examination of Wood on Monday.

Linda Richardson is a freelance journalist who has been covering Sault Ste. Marie's courts and other local news for more than 45 years.
Read more