A peek at life when your husband has Alzheimer's disease

During January's Alzheimer's Awareness Month, award-winning author and playwright Jennifer Dance Bowen is sharing the story of how life has changed for her and husband Feroze Mohammed
0
Jan 6, 2020 9:00 PM By: Lisa Day 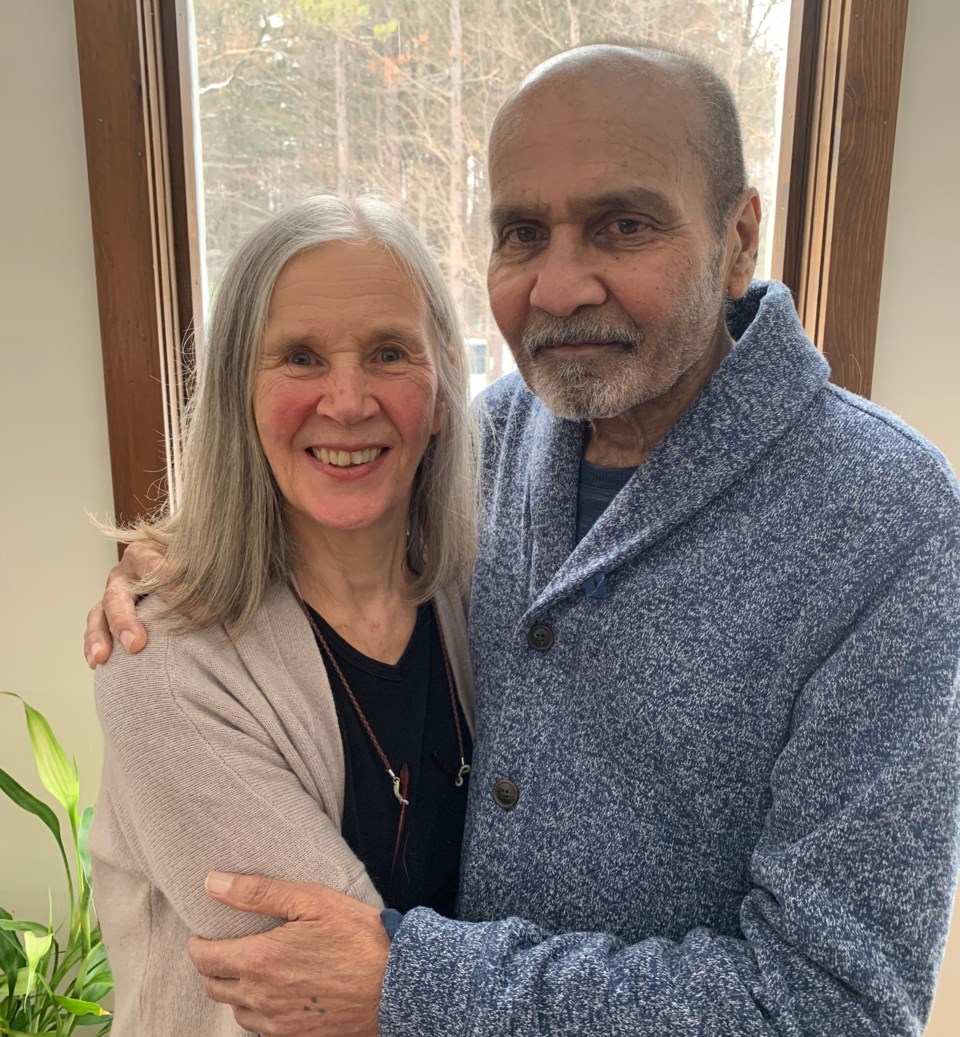 Jennifer Dance Bowen and her husband, Feroze Mohammed, live on a beautiful 15-acre property backing onto the York Regional Forest. On this day, the bird feeder is the hot spot, with cardinals, woodpeckers and blue jays making themselves at home, while Jennifer’s horse forages through the snow.

“I always said the only way I would leave this property is in a box,” Jennifer said during a recent interview. “Now I am not so sure.”

That is because Feroze lives with Alzheimer’s disease, and the responsibilities that used to be divided between the couple now fall solely on Jennifer.

“These should be my golden years,” Jennifer said.

While Feroze once used the tractor to cut the grass, Jennifer now has to do it or hire someone. The same with snow shovelling and all the work around the property.

Feroze used to do all the driving, but due to the progression of his Alzheimer’s, he no longer drives. And it’s not just the driving, but also all the things to keep the car on the road – checking the tire pressure, windshield washer fluid and services.

“Every single decision is mine. It’s like having a very big toddler, but I’m not as energetic or as healthy as I was when I had little kids, so it can be exhausting. Sometimes I get resentful or impatient and then I feel guilty because I know it’s not his fault.”

“Conversations should go back and forth like a tennis game, but with us, it’s like serving the ball into the net time after time.”

There are other changes.

Feroze used to walk to the end of their long driveway every day to pick up the newspaper, coming back and reading it cover to cover. Now Jennifer goes down the hilly driveway, afraid her husband will be unable to find his way back. The newspaper remains on the dining room table, but no one reads it.

“He can still read individual words, but he can’t hold them in his mind long enough to understand the sentence, let alone a paragraph,” Jennifer said.

It’s different from the man who used to spend his free time reading literature and editing magazines and books.

Feroze was born on Aug. 10, 1945 in Trinidad. He was one of four boys – Shiraz, who has cognitive impairment, Afzal and Rasheed. His dad, Sayeed, who also had dementia, was a taxi driver, while his mom, Hafeeza, was a housewife. They understood the importance of education.

“Neither of Feroze’s parents had an education and they really pushed their boys to get one as they knew it was their way out of poverty.”

Jennifer said Feroze talks fondly of his childhood, living in his large family home with his extended family, climbing trees and stealing fruit from their neighbours’ properties.

After high school, Feroze worked as an editor for the Trinidad Guardian, the local paper, before immigrating to Canada when he was in his 20s. He started working as an editor for Macleans Magazine before moving into an executive editor role at Harlequin, working in the action/adventure division.

It was at that time in the early ‘80s that Feroze met Jennifer.

Jennifer was born in England, but moved to Trinidad with her parents to attend university. After graduation, she moved back to England, got married to her university boyfriend and began her family – Joanna, James and Kate. The couple moved to Canada, where her husband died shortly after arriving.

Jennifer was living in Scarborough when her friend, Kathleen, visiting from Trinidad, brought along some of her friends. Within that group was Feroze, and the pair hit it off.

“We had a common background – Trinidad – and he loved kids, and family,” Jennifer said. “In fact, it was his love of family – and his fashion sense,” that she appreciated right from the start, Jennifer said, laughing. Before the couple even began officially dating, Feroze introduced her to his brother and family, and they spent a lot of time doing things as a family.  Six months after meeting, the pair began dating, eventually having two children together – Tarik and Matthew.

The couple bought their current home in the '80s and Jennifer decided to stay at home, living off the land to provide for her family.

They had a jersey cow, which Jennifer milked twice a day to provide milk, butter, cheese and yogurt. The cow was bred once a year, the calf raised for meat. They also had pigs and chickens, and a garden, although Jennifer said that was a lot of work.

Jennifer began writing books for young people, which Feroze edited for her (“He taught me a lot”). When her first book, Red Wolf, was published about the residential school system in Canada, Feroze was happy for his wife’s success.

“He always said he wanted to write a book. Later he admitted he didn’t think he could. A writer is a writer. An editor is an editor.”

Feroze also went back to school, earning a degree from York University in sociology, with the specialization in race relations, “maybe because he wanted to do something good.”

When he wasn’t working, Feroze was reading, watching movies and keeping up with current events.

While Jennifer’s passion is horses, Feroze would say he doesn’t ride as he fell off one once.

Jennifer laughs at the memory.

“Feroze was so convinced he could ride without guidance, I let him go. The horse knew there was a novice on its back and took off for the barn. Feroze flew off and never got back on.”

Feroze continued working with Harlequin until he retired at 64, a year earlier than originally planned.

“At the time, Feroze said he had enough and he just wanted to take it easy.” Jennifer said. She now suspects mistakes were being made at work and things were falling through the cracks, with Feroze knowing something was wrong.

Jennifer, herself, began to notice changes in Feroze as soon as he was home full time. He was forgetting how to do things, and he was saying the same things, not realizing he’d already said it. She tried talking to the doctor about it, but Feroze, like many people with dementia, was good at diverting the conversation, minimizing and making excuses, which left the doctor believing him and making Jennifer appear like one of those “overreacting wives.”

“I think his diagnosis was delayed because he scored 30 on the Montreal Cognitive Test, the top mark. He was a walking encyclopedia. He had an amazing amount of stuff stored in his memory,” so for the first several years every time he took the test, his score remained at 30. Then his numbers began to slide, and his doctor sent him to a gerontologist at Southlake Regional Health Centre, where he was diagnosed with mild cognitive impairment. He had a CAT scan and an MRI to rule out tumours or a stroke.

By this time, Feroze couldn’t go to the store to pick up even one item because he didn’t know how to pay for it, or he would forget why he was there. And he told the same story over and over.

He was also anxious and fearful about the future.

Feroze currently sits at an eight on the scale and along the way he was diagnosed with Alzheimer’s disease.

Today, he can’t follow the plot in a movie or even a TV show.

“He watches CNN –  same news over and over, yet he still doesn’t know what’s happening in the world, other than (U.S. President Donald) Trump is bad news. And he loves Judge Judy.”

He can get dressed, but needs help knowing what to wear. Everything takes longer and requires more patience.

Directions have to be offered one at a time and skills such as loading the dishwasher have disappeared as Feroze, logically, can’t figure out where the cutlery or glasses go. Yet, Jennifer continue to offer ways for Feroze to help, simply because he wants to.

“He really wants to help.”

He is no longer afraid of the future.

“Now he doesn't know he has it (Alzheimer’s) and he's thankful for his good health.”

But the stress of caregiving, and becoming isolated due to the illness, took its toll and Jennifer was faced “with the reality that I could die before Feroze. With new resolve, I told him he was going to the DAY program whether he liked it or not because I was no longer well enough to care for him.”

Feroze joined the Alzheimer Society of York Region (AS York) DAY program. For the first month, it was difficult as Feroze would come back angry with Jennifer for making him go. However, one day, something changed and Feroze instead commented about how nice everyone was, particularly the woman who came in to play music.

Today, a York Region Mobility Plus transit vehicle picks Feroze up and takes him to the DAY program two days a week. Sometimes he asks if Jennifer is coming with him. That is because Jennifer and Feroze took AS York’s Minds in Motion program together, but she simply reminds him that today is the day he goes by himself and off he goes.

Minds in Motion, funded by the Ontario Trillium Foundation, offers cognitive and social simulation and exercise for those living with early to mid-stage dementia and their care partners.

When Feroze is at the program, Jennifer gets work done around the house, attends medical appointments and sometimes gets out for a ride on her horse. She also writes. Her latest book, tentatively named Tangled Tales, is about a woman named Mary, who has been recently diagnosed with Alzheimer’s. The story flips between Mary’s telling of her past, including information she has never shared with her children, and that of Sage, a golden retriever who takes care of her human pack.

Mary’s story is also Jennifer’s story and like all her books, this one uses her experience to help people, in this case, understand what it is like to live with dementia.

“I educate people about big, important issues in an easy-to-understand and relatable way that is not a textbook.”

For this manuscript, she is raising awareness about Alzheimer’s disease, which is “not just a Canadian topic, but a worldwide one. Alzheimer’s is rampant all over the world now and it’s getting worse as the baby boomers age.”

By sharing Mary’s story, and her own, she is helping people understand what it is like to live with this fatal disease.

“At heart, I’m an activist, standing up for the environment, and for those who have no voice. Instead of participating in demonstrations, I raise awareness about important issues by writing. I hope that my life experience will help others really understand this disease.”

Jennifer will share her caregiving Wednesday, Jan. 29 at the Alzheimer Society of York Region's Caring for the Caregiver event. Call 905-726-3477 for details.

— Lisa Day is the communications and fund development coordinator for the Alzheimer Society of York Region.

Prepare for new coronavirus like an emergency, health minister advises
Feb 27, 2020 9:18 AM

Dead skunk found inside swastika-painted briefcase in Central Ontario
Feb 27, 2020 8:28 AM
Comments
We welcome your feedback and encourage you to share your thoughts on this story. We ask that you be respectful of others and their points of view, refrain from personal attacks and stay on topic. To learn about our commenting policies and how we moderate, please read our Community Guidelines.

Hwy. 144 closed from Cartier to Timmins due to inclement weather
0