Community spread of COVID-19 within Canada taking over as main threat, Tam says 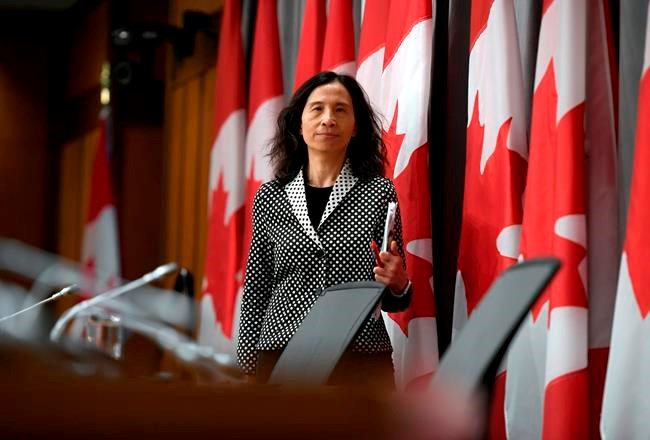 OTTAWA — Canada's chief medical health officer Dr. Theresa Tam says overall in Canada, an equal number of Canadians who have tested positive for COVID-19 contracted the virus from travel and from transmission within their own communities.

But the trend is now turning toward community spread.

Tam says this is a "fundamental shift" in the spread of the virus in Canada.

If Canada is going to get a handle on community spread, social distancing and maintaining a two-metre barrier between people is essential, she said.

"Our primary strategy is to ensure that people are self-isolating when they should be and that everyone is respecting social distancing. That, in and of itself, will cut down on the change of transmission if everybody respects that," Tam said Tuesday.

"I can't emphasize how important that is."

She noted the importance of understanding how the virus is spreading within communities, as this will have an impact on steps taken to stop transmission. For example in British Columbia, several clusters of cases and deaths have occurred within long-term care facilities, which has led to stringent protocols being enacted within these facilities to protect their more vulnerable residents.

She also pointed to a dental conference in B.C. that resulted in at least 20 cases and one death — of a working-age health care professional. With conferences and large gatherings now banned, this type of transmission risk is now lessened, Tam said.

People identified with the illness now likely caught it from exposures up to three weeks ago, which is why health officials hope restrictive social distancing policies enacted across Canada in the last two weeks will start to show in upcoming data.

Tam acknowledged the backlogs in testing for the virus have been frustrating, but says work is ongoing to find ways to hasten results.

"Speeding up lab tests is very, very important as you're trying to detect cases and contain them. But right now there is an issue with getting lab tests to everywhere with full speed," she said.

"We're doing everything that we can with domestic solutions, trying to pull out all stops in ratcheting up that laboratory capacity as we speak."

Also on Tuesday, 220 passengers from the Grand Princess cruise ship who completed their 14-day quarantine at CFB Trenton and are symptom-free have been released. Those who continue to have symptoms will remain until they're healthy.

BEYOND LOCAL: How teaching children digital literacy skills can help them recognize misinformation
Sep 29, 2020 9:25 AM

COVID-19: Recovery plan inspires confidence but Canadians like working from home for now, poll suggests
Sep 29, 2020 9:05 AM
Comments
We welcome your feedback and encourage you to share your thoughts. We ask that you be respectful of others and their points of view, refrain from personal attacks and stay on topic. To learn about our commenting policies and how we moderate, please read our Community Guidelines.