B.C. health minister has concerns about the level of detail airlines provide, says there's been 'a lack of movement from federal officials'
Aug 6, 2020 7:00 AM By: Canadian Press 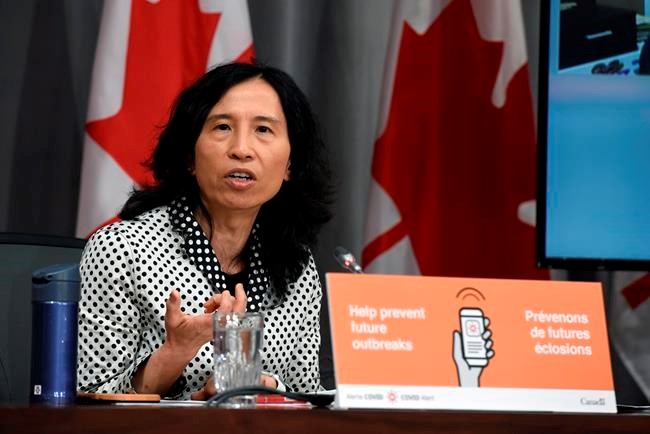 OTTAWA — British Columbia's transport minister made an official plea to her federal counterpart Wednesday to quickly make airlines provide more details on travellers to aid contact tracing efforts that could help slow the spread of the novel coronavirus.

Concerns about the level of detail airlines provide have been greatest in B.C., where the provincial health officer has lamented a lack of movement from federal officials.

In a letter to Transport Minister Marc Garneau, the B.C. government noted the information the province has received from airlines is "not necessarily complete and is sometimes unusable."

B.C. Transport Minister Claire Trevena said the data often includes the names of travel agencies that booked flights, a frequent flyer number, or the person who booked the ticket but not necessarily the name and contact information of the person who actually flew on the plane.

She urged the government to "ensure the data gathered is usable and traces back to the individual traveller directly," rather than simply listing flights with a positive COVID-19 case.

"We have come so far together as a country with much success to curb the spread of COVID-19," reads the letter. A copy was provided to The Canadian Press.

"As we restart our economy, however, we want to ensure all passengers and communities remain safe and that nobody is put at risk due to any oversight."

Garneau and Trevena spoke on Wednesday afternoon, his spokeswoman said. Livia Belcea said in an email that Garneau committed to create a way for airlines to share passenger data to trace "individuals who may have been exposed to COVID 19 while on a domestic flight."

The Public Health Agency of Canada already requires airlines to provide information on travellers arriving on international flights, who are subject to strict quarantine rules, but it's domestic flights where issues have arisen.

The divide in talks between Ottawa and the airlines appears to fall along whether phone numbers or email addresses are enough, or if residential addresses, for instance, should also be part of any handover.

Mike McNaney, president of the National Airlines Council of Canada, said in a statement that flight information is provided when requested, "per established procedures for communicable diseases" and usually in less than 24 hours.

"Our members are fully committed to protecting public safety," the statement said.

Public health officials tried to trace contacts for every person early on in the pandemic, but those efforts slowed as people were ordered to stay home or quarantine, and as travel dropped.

Dr. Theresa Tam, Canada's chief public health officer, said Tuesday there could be improvements to the data that airlines provide, noting flight manifests lack all sorts of details that make it difficult to reach people in certain seats.

Tam also said there hasn't been a confirmed case of in-flight transmission.

"Very few of our cases actually come from travellers at the moment," she said. "But now that our case numbers have gone down, there's been more interest in why don't we follow some of these planes and see if there's been any contact at all that's been exposed or transmitted."

Air operators have to record the names of everyone on board an aircraft, but there is no federal requirement that they submit passenger manifests to Transport Canada, said Belcea.

"Airlines should be making sure that accurate information is being shared as soon as possible and it shouldn't be up to them to pick and choose how they do it," she said. "It should be the federal government mandating them."

This report by The Canadian Press was first published Aug. 5, 2020.