COVID-19: Ontario patients to be ranked for life-saving care should ICUs become full

Patients will be scored by doctors on a 'short-term mortality risk assessment,' according to a new document
Jan 18, 2021 8:20 PM By: Canadian Press 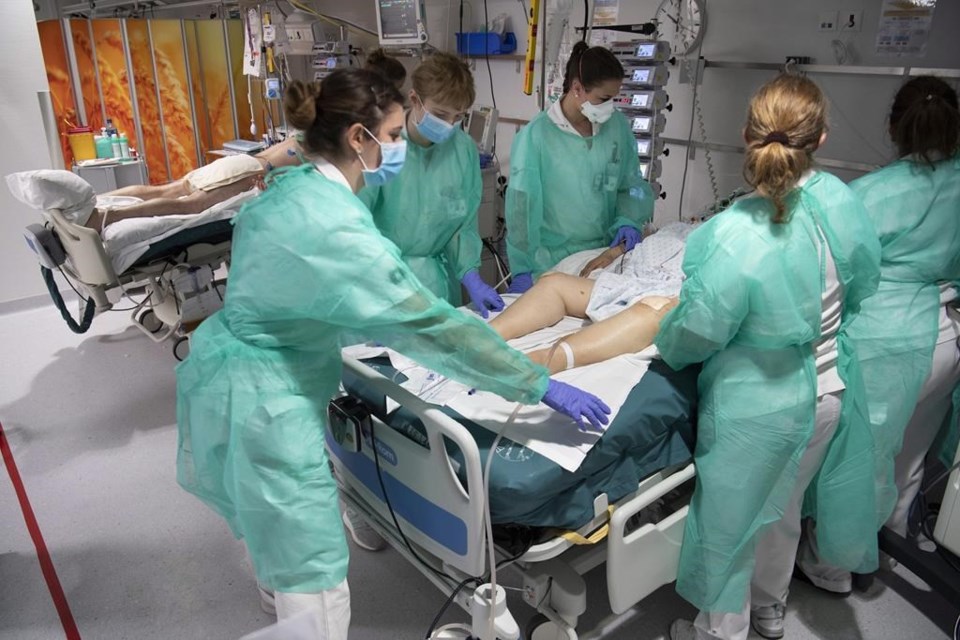 Hospitals in Ontario have received a much-anticipated document that lays out the criteria to be used if intensive care units fill up and medical resources are scarce.

According to the document, titled "Adult Critical Care Clinical Emergency Standard of Care for Major Surge" and prepared by the province's critical care COVID-19 command centre - patients will be scored by doctors on a "short-term mortality risk assessment."

"Aim to prioritize those patients who are most likely to survive their critical illness," the document notes.

"Patients who have a high likelihood of dying within twelve months from the onset of their episode of critical illness (based on an evaluation of their clinical presentation at the point of triage) would have a lower priority for critical care resources," the document reads.

"Level 1 triage deprioritizes critical care resources for patients with a predicted mortality greater than 80 per cent," the document notes.

"Level 2 triage deprioritizes critical care resources for patients with a predicted mortality (greater than) 50 per cent."

At this level, clinicians may abandon the short-term mortality predictions in favour of randomization, which the document notes is to be used "as a last resort" and should be conducted by an administrator, not by bedside clinicians.

The protocol, dated Jan. 13, says there are three steps on the road to critical care triage:

In Step 2 , "if demand still exceeds capacity, the hospital will adjust the type of care being provided to focus on key critical care interventions," which include basic modes of ventilation.

Step 3 is the initiation of critical care triage. Once that process kicks in, "all requests for ICU admission are managed by an administrator on call who supports the bedside clinicians."

Modelling released by the province last week show that about 700 ICU beds will be used by COVID-19 patients by the first week February.

Dr. Andrew Baker, the head of the critical care COVID-19 command centre and director of critical care at St. Michael's Hospital, said the triage protocol contains information and tools that are a standard way for physicians to conduct an assessment for a patient upon arrival at an emergency department.

"They were shared with the critical care community as background only and to ensure a common approach across the sector, so physicians and other health professional staff can learn how to quickly operationalize an emergency standard of care for admission to critical care, if ever needed," he said.

Baker said an emergency standard of care is not in place, but will be enacted if needed.

He said there is an "extensive, sophisticated, provincewide effort" to transfer patients out of hospitals that are at capacity.

Dr. Michael Warner, the medical director of critical care at Michael Garron Hospital in Toronto, said the hospital is running at 105 per cent capacity, but has cancelled surgeries in order to keep some spots open in the ICU.

"I sincerely hope we never need to use this because it is terrible for patients, terrible for their families, causes moral distress for health-care workers, and it's something that we should do everything possible to avoid having to implement," Warner said. David Lepofsky, the chairman of Accessibility for Ontarians with Disabilities Act Alliance, said the triage guidelines are discriminatory.

He pointed to the clinical frailty scale, a prognostic tool doctors use in cases of progressive illnesses to assess a patient’s general deterioration over time.

"This is disability-based discrimination and that's against the law in the Constitution," Lepofsky said.

This report by The Canadian Press was first published Jan. 18, 2021.

ONTARIO: Ryerson Review of Journalism temporarily cuts 'Ryerson' from its name
Feb 25, 2021 9:38 AM