Each year, seniors with registered retirement income funds have to withdraw a minimum amount from their savings, which is considered taxable income
Nov 20, 2020 10:00 PM By: Canadian Press 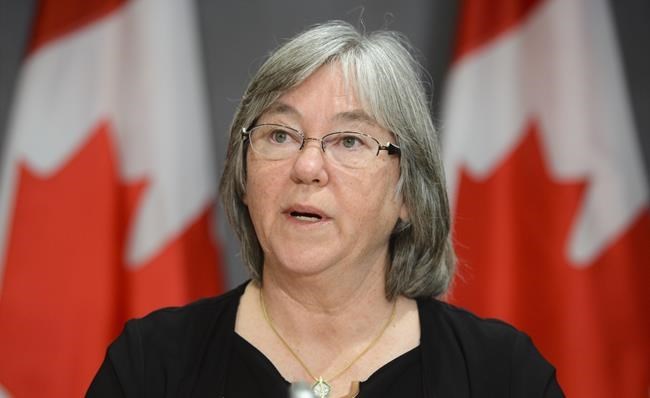 Minister of Seniors Deb Schulte speaks during a press conference on Parliament Hill during the COVID-19 pandemic in Ottawa on Thursday, June 4, 2020. THE CANADIAN PRESS/Sean Kilpatrick

Each year, seniors with registered retirement income funds have to withdraw a minimum amount from their savings, which is considered taxable income.

The Liberals shifted the marker this year, dropping the minimum for each senior by 25 per cent to ease concerns raised by the effect of the COVID-19 pandemic.

That let those who could afford it leave more money in their tax-sheltered investments, hoping to recoup losses from the pounding the pandemic delivered to the markets.

The parliamentary budget office says cutting the minimum withdrawal all the way to zero would end up costing the federal treasury $940 million next year, rising each year until hitting just over $1 billion in 2025.

Seniors groups had pressed the Liberals earlier this year to waive the minimum withdrawal limit owing to the effect COVID-19 was having on financial markets and retirement savings.

At the time, Seniors Minister Deb Schulte said the government would watch financial markets before making any decisions, since most seniors don’t need to make RRIF withdrawals until the end of the year.

On Thursday, her office said the Liberals would continue to work with lower levels of government to ensure seniors have the supports they need during COVID-19.

Figures the PBO provided for the most recent year available, 2018, show that nearly 2.1 million taxpayers had registered retirement income funds, with an average amount of $114,019.

The average withdrawal that year was $10,645, and 41 per cent of fund holders withdrew above the minimum limit, which is designed to make sure the money is used to fund retirement years.

Meanwhile, the government has been urging low-income seniors to file their tax returns soon to avoid having benefits cut off Jan. 1. The deadline federal officials have set to receive and have processed seniors' income information is Nov. 29.

The information determines eligibility for and the value of payments like the guaranteed income supplement, which goes to low-income seniors.

The government estimates that 44,000 out of 2.2 million GIS recipients have yet to send in the needed information.

The government's outreach to those seniors included notices in the mail from Service Canada and calls to as many as 45,000 seniors this fall. They're being asked to contact Service Canada.

"The government continues to reach out to those who haven't filed because we know they count on their (guaranteed income supplement) benefits," Schulte's office said in a statement.

Payments to vulnerable Canadians, such as seniors, as a result of the pandemic have skyrocketed.

A recent government-commissioned report noted there may be as many as 100 million more payments this fiscal year because of COVID-19, one-third of which would be by cheque.

Recent enrolment in direct deposit — which the government promotes as a faster way to receive benefits, but also reduces costs of printing and mailing cheques — has mostly been for those receiving emergency aid or employment insurance.

The public opinion research report noted that about three per cent of respondents who recently signed up for direct deposit were receiving seniors benefits.

This report by The Canadian Press was first published Nov. 19, 2020.