Veterans Affairs Canada revealed this month that there were 44,000 applications waiting to be processed at the end of September
0
Feb 21, 2020 5:00 PM By: Canadian Press 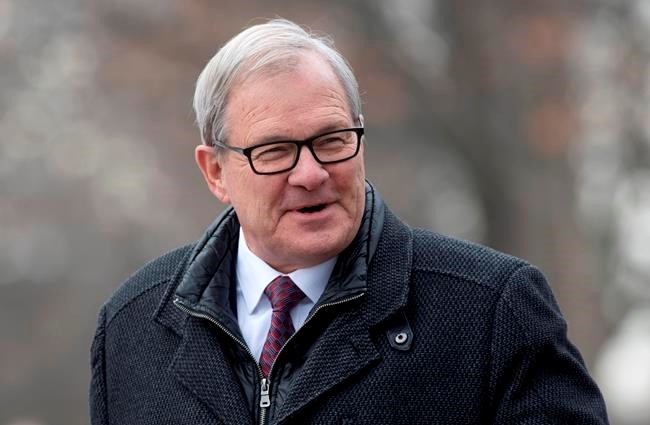 Lawrence MacAulay arrives at Rideau Hall before being named Veterans Affairs and Associate Minister of National Defence Minister at a ceremony in Ottawa, Wednesday. November 20, 2019. Veterans ombudsman Craig Dalton says the federal government should clearly explain how it plans to eliminate a backlog that is keeping thousands of former service members waiting to find out if they qualify for benefits and aid. THE CANADIAN PRESS/Adrian Wyld

OTTAWA — The watchdog for Canadian veterans is urging the federal government to explain clearly how it plans to eliminate a backlog that is keeping thousands of former service members waiting to find out whether they qualify for disability benefits and help.

Veterans ombudsman Craig Dalton's comments come amid growing frustration in Canada's veteran community as the number of applications for disability benefits and other assistance continues to grow despite repeated government promises to address the problem.

Veterans Affairs Canada revealed this month that there were 44,000 applications waiting to be processed at the end of September, a 10 per cent increase from six months earlier. Some were incomplete applications that needed more information from applicants but most were just waiting for the department's review.

Veterans Affairs Minister Lawrence MacAulay has described the backlog as unacceptable and said eliminating it is his top priority while departmental officials say they are implementing a number of measures behind the scenes to process applications faster.

Yet Dalton, who worries about the impact long wait times for assistance are having on at-risk veterans, believes what has been missing is a clearly articulated plan explaining how the government plans to accomplish that task.

"If you don't know where you're going, it's not likely you're going to get there," Dalton told The Canadian Press in an interview Thursday.

"So if they were to say: 'The backlog is X, we're going to try to reduce it by 25 per cent by this date and ... this is how we think we're going to get there' — in the absence of that kind of a discussion, we're all in the same boat: We're just waiting for the next update to come out."

The most common complaint to the ombudsman's office is about delays in the approval of services and benefits, a fact that predates Dalton's arrival in the position in November 2018. In fact, Dalton described it as "the most significant issue that's out there right now."

The concern is that veterans with serious health or financial needs aren't getting the help they need when they need it, putting them at further risk as they wait to find out whether they qualify for assistance.

"Unmet health needs would be our No. 1 concern with the wait times," Dalton said. "No. 2 is veterans who are, for a variety of reasons, maybe at a point of crisis. So we have heard of veterans who are at risk of homelessness or who are homeless who have claims in for adjudication."

One change Dalton would like to see is for claims related to psychological injuries such as post-traumatic stress disorder to be approved automatically.

Around 94 per cent of such claims are already approved through adjudication, and Dalton says follow-up audits could be added to ensure both compliance and speedy delivery of service.

Yet for all the streamlining and fast-tracking the department can do, Dalton said there is a clear need for more resources.

The Liberal government injected $20 million into the system over two years in 2018 to hire more staff to eliminate the backlog. But not only does the money run out at the end of March, the growing number of cases waiting for decisions suggests even more money will be needed.

While MacAulay refused in an interview this month to promise more funds, Dalton said it is clear such an investment is required.

"If you look at a problem like this that has gone on for a significant amount of time, part of it is process change," Dalton said. "But I do believe that part of it is making sure that adequate resources are in place as well."

This report by The Canadian Press was first published Feb. 20, 2020.

Here's what you should know about wearing cloth face masks
Apr 7, 2020 7:55 AM
Comments
We welcome your feedback and encourage you to share your thoughts on this story. We ask that you be respectful of others and their points of view, refrain from personal attacks and stay on topic. To learn about our commenting policies and how we moderate, please read our Community Guidelines.