Premier Doug Ford has expressed frustration that Ontario has been processing a daily number of tests well below its capacity, which is now up to 16,000
Apr 17, 2020 5:00 PM By: Canadian Press 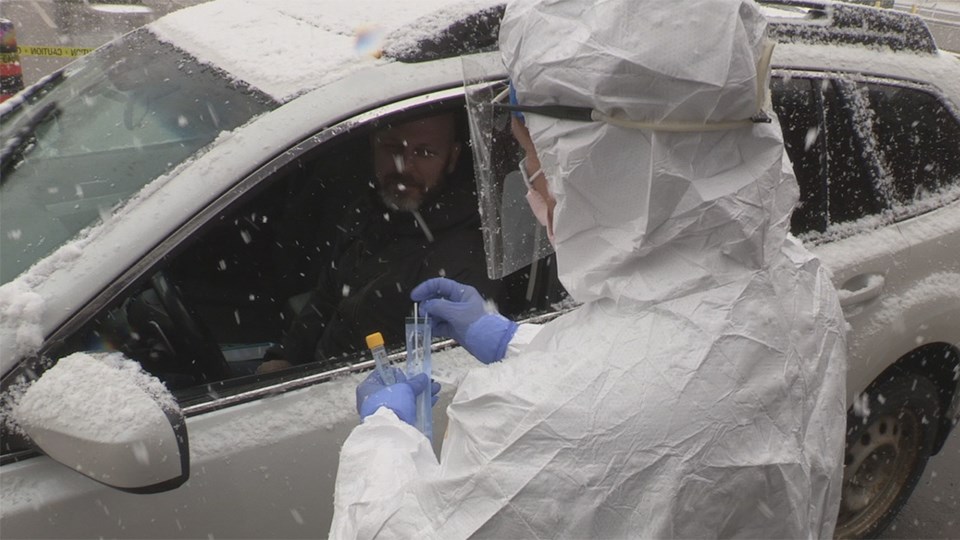 HSN gave local media a tour of their Walford Road testing site on April 16, to provide a closer look at what the day-to-day rigor is like inside a COVID-19 testing area. (Matt Durnan/Sudbury.com)

The new guidelines will help Ontario take full advantage of the testing capacity it has built, and will help the province more effectively identify and contain cases among vulnerable populations, said a spokeswoman for Health Minister Christine Elliott.

Premier Doug Ford has expressed frustration that Ontario has been processing a daily number of tests well below its capacity, which is now up to 16,000.

On Thursday, the province reported completing 9,001 tests during the previous day, surpassing a target the health minister set last week after the premier said his patience had worn thin.

"We've hit our first target and we're going to keep ramping up our efforts until we hit 14,000 tests a day by the end of this month," Ford said Thursday.

In March, the province said it would be running 18,900 tests a day by mid-April.

The new testing guidelines say people living and working in "congregate" settings such as homeless shelters, correctional facilities and group homes should be tested as soon as possible if they have symptoms.

Essential workers, cross-border workers, and people living with health-care workers, care providers and first responders are also now to be tested as soon as possible if they develop symptoms.

The guidelines also say people who need to be in frequent contact with the health system, including cancer patients, people undergoing dialysis, anyone pre- or post-transplant and pregnant women should be tested as soon as they develop symptoms.

Testing asymptomatic people is still not recommended, except for newborns whose mothers have COVID-19. The province has also previously expanded long-term care testing to asymptomatic contacts of positive cases.

That brings the province to a total of 8,961 cases, including 423 deaths and nearly 4,200 cases that have been resolved.

The growth in total cases has been relatively low for about a week, and Ontario health officials have said the peak is expected this week.

Ontario's chief medical officer of health, Dr. David Williams, said increased testing in long-term care homes has led to people from those facilities making up a larger percentage of the new cases.

Of Thursday's 514 new cases, 271 were related to long-term care facilities, Williams said — the first time there have been more of those cases than community ones. That's an "encouraging" sign for levels of infection in the community, Williams said.

The 248 people in ICU with COVID-19 is well below the 1,200 projected in the "best case scenario" in recent modelling. Ford said updated modelling is expected to be released, perhaps next week.

"We are still planning for an increase in numbers," she said. "I hope we don't need to use them, we don't need those hospital spaces, but they are there if people need them."

The state of hospital capacity is what has allowed the province to deploy some of those resources to long-term care homes, Ford said, which have been hard hit by COVID-19.

There have been 104 outbreaks reported in long-term care homes, with cases in 933 residents and 530 staff members. At least 163 residents have died.

Meanwhile, the province's Financial Accountability Office released an analysis Thursday showing that 1.2 million Ontario workers have been affected by the COVID-19 closures, either through job losses or reduced hours.

This report by The Canadian Press was first published on April 16, 2020.