Hair salons and other personal care services are only slated to open in Step 2, which won't kick in until next month
Jun 17, 2021 10:00 PM By: Canadian Press 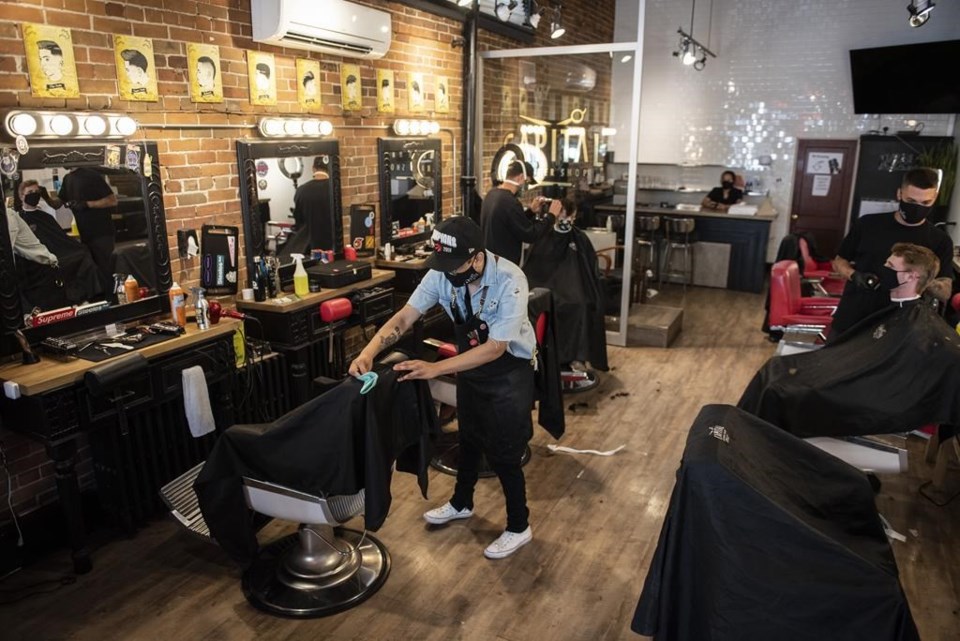 Barber James Noun sanitizes his barber chair in between clients at Capital Barber Shop in Ottawa on June 12, 2020. THE CANADIAN PRESS/Justin Tang

Hair salon owners are calling on Ontario to allow their industry to reopen, saying their establishments are safe and employ ample measures to guard against COVID-19.

The province entered the first phase of a three-step reopening plan last Friday. Non-essential retailers were able to reopen, patio dining resumed and outdoor fitness classes restarted, among other things.

Hair salons and other personal care services, however, are only slated to open in Step 2, which won't kick in until next month.

Stefania Capovilla, an Ottawa hairstylist and salon owner, said she and her industry colleagues are ready to reopen with precautions that include limiting capacity, accepting clients by appointment only, screening everyone for COVID-19, having plexiglass barriers in place, and following public health measures such as masking and handwashing.

"We are more than prepared when it comes to health and safety," she said.

Capovilla, who also teaches hairstyling at Algonquin College, said she has seen people leave the industry after being out for work for long stretches during the pandemic.

"It's been really difficult for their mental health, for their morale," she said.

The industry has been shut down since April, while salons in COVID-19 hot spots like Toronto and Peel Region have been closed since November.

Kathy Inch, founder of the Ontario Hairstylists Association, which advocates for industry members, said salon safety protocols "have been incredible" during the pandemic but many in the sector are now struggling due to prolonged closures.

The shutdown has also created an underground economy of salons and spas that are operating in violation of the rules while listed businesses remain closed, said Inch, who owns a salon in Pickering, Ont.

The "open secret" has been unfair to those who are staying closed, she said, noting that salon owners still have to pay rent, insurance and operating costs on zero revenue while clients get snatched up by those working underground.

Capovilla echoed those concerns, saying while she understood that those operating illegally were trying to make a living, keeping the industry shuttered was putting people at risk.

"All this has done was created an underground economy of hairstylists providing services unregulated, either in their homes or in people's homes," she said. "Wouldn't it have just been safer for everyone to keep us open and working."

The mayor of Brampton, Ont., which is part of Peel Region, said Wednesday that personal care services should be allowed to reopen this month.

"(Shutdowns) have created an underground economy and given the COVID case declines, I believe there is a pathway to safely reopen in advance of July 2," said Patrick Brown, adding that the industry has been closed in his city since Nov. 23.

The Canadian Federation of Independent Business has also urged the government to add hair salons, barber shops and other personal care services to the list of businesses allowed to reopen in Step 1.

"At this rate, many provinces will be back to normal business operations before Ontarians can even get a haircut. We need to pick up the pace now, or many businesses won't even make it to reopening," CFIB president Dan Kelly said in a statement last week.

The Ontario government said it's taking a cautious approach to easing public health measures based on provincewide vaccination rates and improvements in key health system indicators.

"Highly contagious COVID-19 variants have demonstrated that key indicators can change very quickly and we must remain vigilant," a spokesman from the Ministry of Health said in a statement.

This report by The Canadian Press was first published June 16, 2021.