Schools have been closed since mid-April, and while COVID-19 trends have improved since then, Ford said virus variants pose too great of a risk to send students and teachers back into class before they are fully vaccinated
Jun 3, 2021 7:00 AM By: Canadian Press 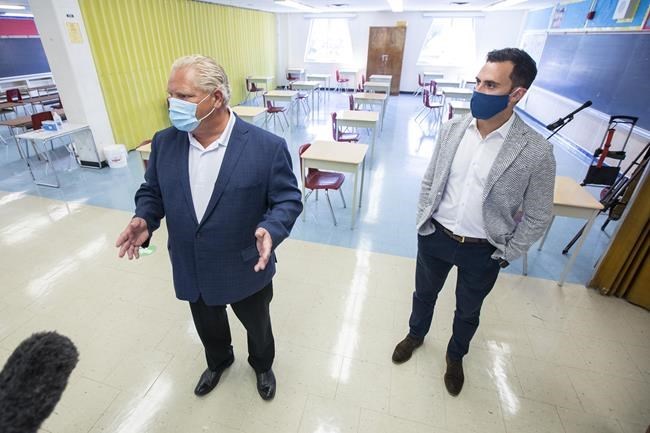 TORONTO — Ontario schools will remain closed for in-person learning for the rest of the academic year, Premier Doug Ford announced Wednesday, while hinting the province could reopen ahead of schedule.

Schools have been closed since mid-April, and while COVID-19 trends have improved since then, Ford said virus variants pose too great of a risk to send students and teachers back into class before they are fully vaccinated.

"While no one wants kids back in school more than I do, as your premier, these aren't risks I'm willing to take," he said.

"Today's difficult decision will help ensure we do have a safe summer ... and create conditions for a safe and normal return to in class learning in September."

The government has committed to offering two vaccine doses to all eligible students and educators by the start of the next school year.

The province's economic reopening plan, announced last month, did not mention schools, and Ford called for advice from experts last week to inform his thinking.

A group of scientists advising the government on the pandemic supported a regional reopening based on local case counts, and others urged the government to reopen schools for children's well-being. But Ford said there was no consensus on whether reopening schools would lead to a spike in COVID-19 cases.

The premier also said he was consulting the province's top doctor about possibly moving ahead with loosening some restrictions and other outdoor activities ahead of schedule, based on improvements in COVID-19 case numbers.

"I'm so hopeful that as things are going, we may be able to enter Step 1 safely earlier than June the 14th," Ford said.

Some critics accused the premier on Wednesday of prioritizing the economy over schools -- the opposite of the approach championed by the province's top doctor, who has said repeatedly that he believes schools should be the last to close and the first to open during the pandemic.

Others criticized the government for failing to act earlier in the pandemic to support in-class learning, which has been disrupted repeatedly as the province battled virus resurgences.

The leader of the NDP said Ford failed to prioritize students by not investing in measures like proper ventilation or vaccinating education workers sooner.

"There is a lot that Doug Ford could have done to prioritize our kids, but he just didn't seem to think that was a priority, and I think that's pretty shameful," Andrea Horwath said.

The Elementary Teachers’ Federation of Ontario, which had been calling for classes to resume, criticized Ford for ignoring the advice of stakeholders.

“This past year has been incredibly challenging, but it was made even more difficult by Ford’s refusal to listen," union president Sam Hammond said in a statement.

A group of children's health organizations, including SickKids Hospital, said it was disappointed in the government's decision and called for planning to ensure children are prioritized during the pandemic recovery.

"For many kids, decisions by government will impact their learning, development, physical and mental health not only now but for years to come," the Children's Health Coalition said in a statement.

The head of the Registered Nurses' Association of Ontario, however, said she supported the premier's cautious approach.

"We fully understand the importance of school for children's mental health and academic development," Doris Grinspun wrote on Twitter. "However, the risk of a wave four is too high. We fully support (Ford's) decision to keep schools closed until September."

Ford and his education minister have repeated throughout much of the pandemic that schools are safe for in-class learning.

He insisted on Wednesday that his new concerns over safety arose due to more infectious variants of the virus spreading in Ontario, arguing that reopening schools could mean more public health restrictions during the summer.

Ford also said he had asked school boards to allow outdoor graduation ceremonies for all grade levels, not just students in grades 8 and 12.

He also said he's working to ensure summer camps can open so kids are able to socialize.

Meanwhile, the head of a union representing 55,000 education workers in Ontario called on the province to assemble a task force of education workers and public health experts to come up with a plan for safely reopening schools in September.

"A year ago we began asking for this, stating that we could not afford to wait," said Laura Walton, president of the Ontario School Board Council of Unions. "We now see the cost of ignoring this request."

Ontario reported 733 new cases of COVID-19 on Wednesday and 25 more deaths from the virus.

A stay-at-home order that asked residents to leave home only for essential services lifted on Wednesday, though most other restrictions on businesses and gatherings remained in place.

This report by The Canadian Press was first published June 2, 2021.

- With files from Nicole Thompson