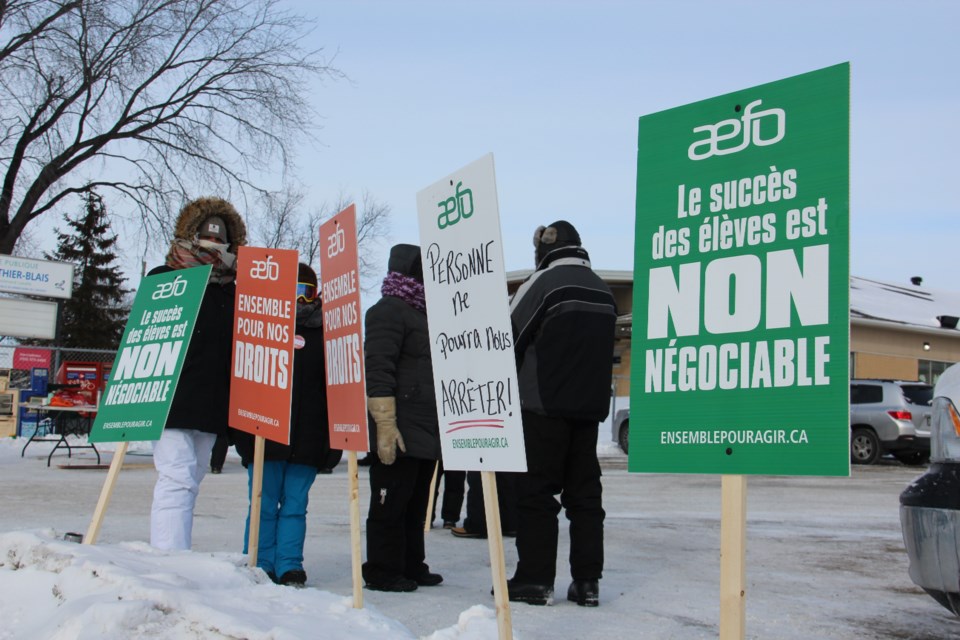 The union said details of the agreement will remain confidential until it is ratified, and a date has not yet been set for a vote by members.

The agreement is the third reached between the government and the province's major teachers' unions in recent weeks after months of contentious negotiations.

Education Minister Stephen Lecce said in a statement that the government is committed to providing stability for students and staff "during this unprecedented time."

AEFO President Remi Sabourin praised both his members and parents in a statement of his own.

"Their encouragement and solidarity supported our efforts throughout a particularly laborious round of negotiations," Sabourin said.

Meanwhile, Ontario's elementary teachers have agreed to salary increases of one per cent a year for three years, according to a memo obtained by The Canadian Press.

Highlights of the Elementary Teachers' Federation of Ontario's new tentative contract with the provincial government were sent to its members this week.

The government had previously said it would not budge beyond an offer to increase both wages and benefits by one per cent per year, but ETFO secured four per cent annual increases to benefits.

The agreement also contains a two-year, $89-million "Support for Students" fund, which ETFO says will create about 434 teacher positions, to address areas such as special education, English language learning and mental-health initiatives.

The government has also made a "binding, enforceable" commitment in writing to maintain the current full-day kindergarten structure, with one teacher and one early childhood educator.

Ontario committed to maintain current class sizes, which means an increase of one student in average class sizes for Grades 4-8 that the government imposed last year won't be rolled back.

ETFO members are set to vote on ratification April 23-27.

Earlier this month, the Ontario English Catholic Teachers' Association reached a tentative deal with the government and is holding ratification votes April 7 and 8.

OECTA also agreed to one per cent on salary and four per cent on benefits, according to a confidential memo obtained by The Canadian Press.

The deal also agrees to average high school class sizes of 23 — up from 22 last year. The government came out with that offer shortly before the deal was reached. It's down significantly from the government's original target of 28.

It also includes language on the seniority hiring regulation that is different from ETFO's deal. It says that 65 per cent of permanent positions will now be filled with one of the three "most senior and qualified applicants." The other 35 per cent of positions can be filled using criteria other than seniority.

The Ontario Secondary School Teachers' Federation has not resumed formal bargaining with the government since December.

OSSTF President Harvey Bischof said that union has been focused on responding to the COVID-19 pandemic in recent weeks and not talks.

"We've all been very focused on trying to do the best we can under these current circumstances ... for us, right now, that's been a higher priority because we're in the midst of unprecedented circumstances."

—with files from Shawn Jeffords

This report by The Canadian Press was first published March 31, 2020.

Note to readers: This is a corrected story. A previous version had an incorrect number of teachers represented by ETFO.

Mail delayed? Canada Post says volume is 'three times the norm'
Jun 5, 2020 12:00 PM
Comments
We welcome your feedback and encourage you to share your thoughts. We ask that you be respectful of others and their points of view, refrain from personal attacks and stay on topic. To learn about our commenting policies and how we moderate, please read our Community Guidelines.