Council has honoured the 'celebrity' mandarin duck for bringing some joy to local pandemic-weary residents, not to mention international media attention
Jan 19, 2021 11:30 AM By: Alan S. Hale 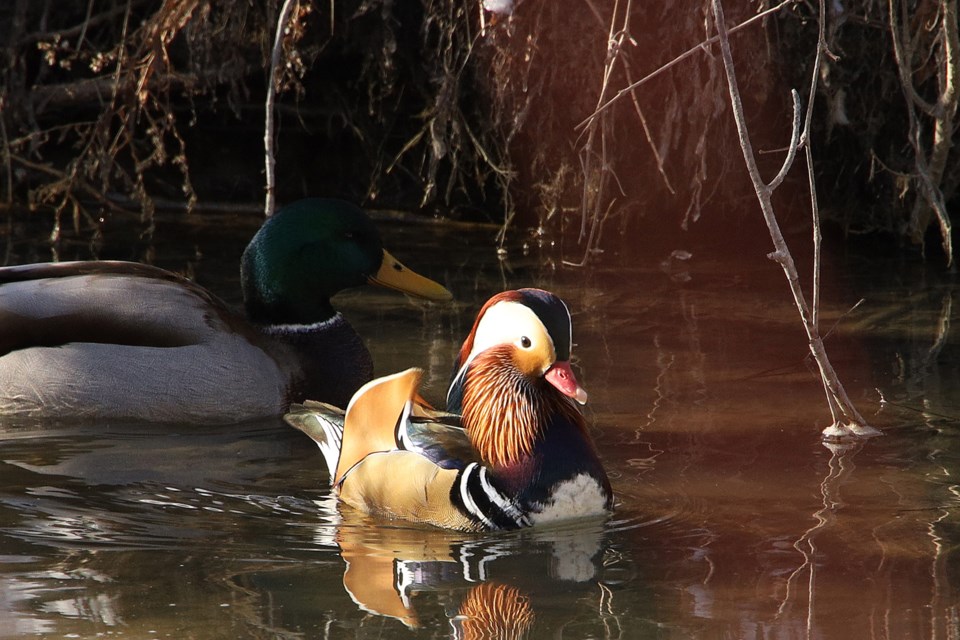 Eddie the mandarin duck has been declared the Honorary Duck of Newmarket.

Council approved a motion put forward by Councillor Jane Twinney in recognition of how the escaped domestic duck's unexpected celebrity gave a pandemic-weary community a much needed emotional boost.

"He had definitely brought a lot of positive feelings to the residents of Newmarket," she said. "I've followed him on social media, and what a beautiful and handsome boy he is. So I think this is something appropriate for us to honour."

Eddie escaped from his home at a rescue farm just outside Newmarket and ended up living with the wild ducks on Fairy Lake and other nearby bodies of water for more than three weeks before his owner, Tracey Harpley, was able to retrieve him with the help of community members and wildlife organization volunteers.

But before he was taken home, Eddie was a public sensation, bringing looky-loos from near and far to Fairy Lake to see him, and even attracted international media attention.

Harpley is grateful for the somewhat odd honour bestowed on her prodigal duck and that his adventure was enjoyed by so many people.

"I was super happy that Eddie caught people's attention, and it worked out in the end," said Harpley. "It's a little bit of a shock, but a pleasant one. "

In response to the overwhelming interest in Eddie, Harpley started some social media accounts for him and now plans to keep maintaining them going forward.

The duck's celebrity may also be useful for helping raise awareness of other animal rescue organizations.

"I've had talks talking with another sanctuary that works with domestic breed ducks. Who knows, maybe we can work together."

Eddie is back at home and confined inside Harpley's house. He won't be allowed to go outside to be with her other ducks until the results of his blood tests come back to make sure he's didn't pick up anything contagious while on his adventure.

"He's walking on my couch right now. He will sit in the window, and once he sees his friends, he wants out," she said.

"After this, I think better fittings and enclosures for Eddie would best. My kitchen isn't exactly the best environment for a duck."

Harpley said she and her many new friends are still on the lookout for a female that joined Eddie while he was on the lam that they are convinced is another mandarin.

Mandarin ducks can be presents during Chinese New Year or as wedding presents, so Harpley has come to believe someone released the female intentionally after hearing about Eddie. She hasn't been seen in many days, however.

Since mandarin ducks mate for life, Mayor John Taylor joked at council that he hoped that Eddie wasn't philandering during his time on Fairy Lake. But perhaps he was. According to Harpley, ever since he got home, his current mate doesn't want anything to do with him.

She plans to put Eddie on Tinder by posting on his social media accounts to look for a new mate for him.

Ontario man believed to be 1st Canadian with COVID-destroyed lungs to get transplant
Apr 12, 2021 10:00 PM

About the Author: Alan S. Hale

Alan S. Hale is a reporter for NewmarketToday.ca
Read more