As negative as the recent headlines have been, 19-year-old Grace Labelle-Scott says the global charity will always be entwined with her high school highlights: forging deep friendships, building self-confidence and discussing important issues with friends
Jul 31, 2020 7:02 AM By: Canadian Press 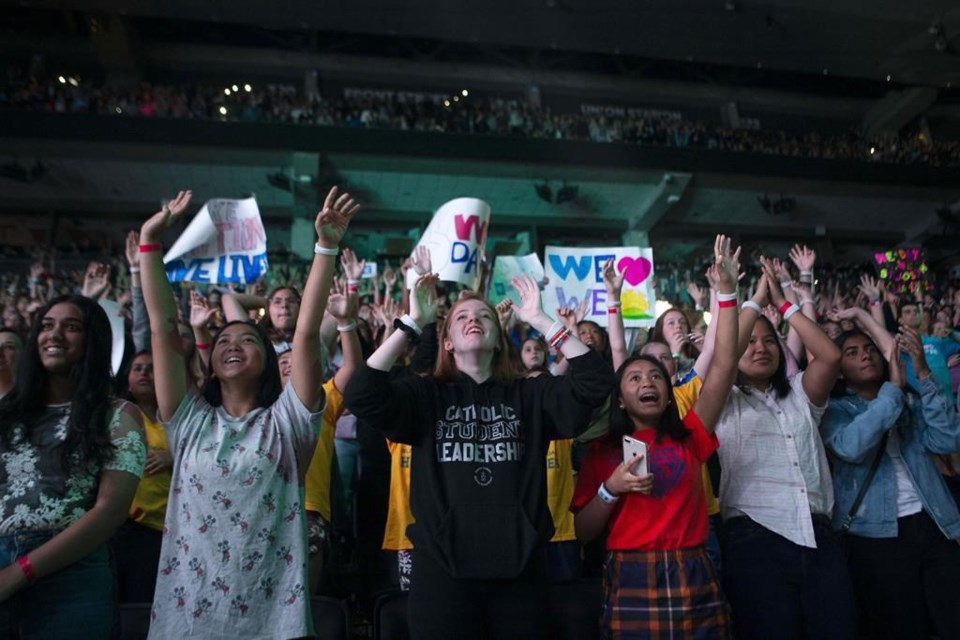 The crowd reacts during WE Day in Toronto on Thursday September 19, 2019. This week's parliamentary grilling of the WE Charity's political ties have increased scrutiny over an already embattled brand, but many former millennial members say that doesn't tarnish the relationships and life-changing experiences that shaped their formative years. THE CANADIAN PRESS/Chris Young

TORONTO — This week's parliamentary grilling of the WE Charity's political ties has increased scrutiny of the embattled brand, but some former members say that doesn't tarnish the relationships and life-changing experiences that shaped their formative years.

As negative as the recent headlines have been, 19-year-old Grace Labelle-Scott says the global charity will always be entwined with her high school highlights: forging deep friendships, building self-confidence and discussing important issues with friends.

"It was very centred on growing as a human being (and) then also change-making and being an activist. And so I found that very inspiring," says Labelle-Scott, who attended WE-related summer camps at age 15 and 16 and also joined the WE club at her Oakville, Ont., high school.

"Their message and their goals as an organization always spoke to me ... so that's what I think of right now, even though all this controversy is going on."

Across the country in Fort McMurry, Alta., it's hard for former WE enthusiast Reagan Morris to not be reminded of the growing disillusionment she says drove her to leave the organization after five years in 2018 while in Grade 11.

Morris says she feels "disheartened" by the current scandal.

"I can't help but feel guilty and like I've been used."

Nevertheless, Morris says the imbroglio surrounding WE won't taint the lifelong bonds she has built over the years, nor her ongoing dedication to social justice and community building.

"The employees there, they weren't a part of all of this. They just wanted to make a difference in kids' lives and that was very clear. And it worked," says Morris, 19.

Along with driving lessons, sports, prom and science fairs, WE programs at thousands of schools across the country were an inextricable part of teen life for many who came of age in the last decade and a half.

There was idealism, to be sure — in large part driven by the inspiring story of co-founder Craig Kielburger himself, says another former WE kid, Victoria Stosky of Calgary.

Twenty-five years after forming his charity, Kielburger, his co-founder brother Marc and Prime Minister Justin Trudeau were among those who testified before a parliamentary committee about a government decision to have the WE Charity run a multimillion-dollar student grant program.

Scrutiny centred on the global brand's connections to the Trudeau family, mass layoffs during the pandemic, and a confusing corporate structure that includes a separate foundation that holds real estate.

Several sponsors have cut ties with the WE brand, including Royal Bank of Canada, Loblaw Companies Ltd., Good Life Fitness and Virgin Atlantic Airways, although WE called the moves a mutual agreement.

Amid the public lashing, several former devotees point to the earnest youthful enthusiasm that fuelled countless community food drives and fundraising water walks on behalf of WE.

Morris rattles off multiple misgivings she has with the organization but also can't discount the good it brought, such as her first WE camp in 2014.

"Camp was the first time I ever met somebody my age who was also LGBTQ," Morris says.

"And that was so crucial to my development as a young person — I went from feeling completely isolated to having this network of people who are like me and share my experiences."

Many more kids took part in WE Schools outside of the provincial education system, adds Elaine Cray of Milton, Ont., who founded the Special Friends Network to support youth and adults with neuro-differences or disabilities in southern Ontario.

For two and a half years, Cray enlisted the WE Schools program to give her network of teens and young adults an added opportunity to socialize, volunteer and forge bonds with their communities.

Taking part in common WE events — such as a Halloween-themed food drive dubbed "WE Scare Hunger" and the global fundraising event "WE Walk For Water" — also helped her members share in the same experiences as many of their peers.

Group excursions to WE Day in 2018 and 2019 were particularly memorable, says Cray, recalling the two years she helped escort about a dozen youth and caregivers to the annual rally in which pop stars, motivational speakers and celebrities pumped up the crowd.

"A lot of them had never been to a real concert or anything like that," Cray says of the star-studded show in Toronto.

"It was really exciting, a big step (in) feeling very independent."

However, Cray also recalls being put-off by the prominence of corporate sponsors, as does Morris who says they seemed to grow more prevalent and aggressive each year.

Stosky, 26, says her involvement dates back to 2009 when the organization was still known as Free the Children.

Back then there was no formal school program so she and her friends formed their own group in the community, but were able to fundraise and organize some events at her school.

"I still fully support what they do," says Stosky, adding that she hasn't followed all of the allegations closely.

"There are obviously organizations that operate in a good way, and some that maybe make mistakes."

This report by The Canadian Press was first published July 31, 2020

BEYOND LOCAL: Black people 'disproportionately' arrested, struck, shot by police, report finds
Aug 11, 2020 8:49 AM
Comments
We welcome your feedback and encourage you to share your thoughts. We ask that you be respectful of others and their points of view, refrain from personal attacks and stay on topic. To learn about our commenting policies and how we moderate, please read our Community Guidelines.