In the course of the last 17 years, he has come as close as any other major Northern Ontario institutional leader to delivering on promises made and promises kept.
Feb 4, 2019 1:00 PM By: Michael Atkins 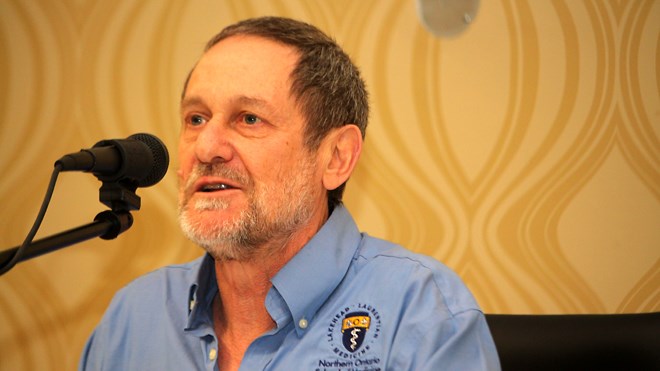 In 2002, a man and his wife and his five children arrived in Northern Ontario for the first time. He was the new dean of the Northern Ontario School of Medicine and he had come halfway round the world to take up the challenge. At the end of June, Dr. Roger Strasser will take his leave.

Although Roger knew almost nothing about his new homeland, he is fond of pointing out he had the advantage of coming from a former penal colony, where people do not generally follow the rules, to a place of peace, order and good government, where people often do. There is a certain amount of passive-aggressive behaviour that comes with this proclivity. A 2005 Sault Ste. Marie headline read, “Is Dr. Roger Strasser selling us snake oil?”

Of course he was. It’s all he had for a while, but in the course of the last 17 years he has come as close as any other major Northern Ontario institutional leader to delivering on promises made and promises kept. The school is a miracle and critical to our health.

Roger had spent his working life dedicated to rural health in Australia before coming to Canada. In fact, some years after arriving here he became a member in the general division of the Order of Australia for his work. Roger being Roger, he suggested they come to Canada to present it to him, and they did.

It’s almost impossible to penetrate Roger personally. His public self is the school. It’s all about goals and statistics and conferences and the team and research and fundraising and the social accountability mandate, and the students who are now distributed across the North improving the lives of Northerners and the communities who welcome them.

But how do you get the trust of thousands of stakeholders across this land mass larger than Europe with competing constituencies and scarce resources? You work hard, you demand excellence, you tell the truth, and you never forget who you are working for.

There are some rules of the road at this institution. First of all, students are found in Northern Ontario, and Indigenous students are pursued. In their first year, all students must spend four weeks training in an Indigenous community. Mostly, it is transformational for the students to appreciate First Nation experiences and history. For some, it reinforces already held prejudices. But for that community, it is a promise made and a promise kept. The original plan was to do distributed learning in seven communities. That number today is almost 90. The school has hundreds of collaboration agreements across the North.

In Chapleau, where they went seven years without a doctor, there are now three.

The school is not just about teaching medicine. It’s about creating resilience. You can’t attract investment and workers if you don’t have health care. You can’t attract doctors if you don’t have communities that know how to welcome them. Distributed learning allows students and communities to learn from one another. That laser focus comes from Roger.

Roger has built an institution that transcends the trials and tribulations of prospering in Northern Ontario. It is the single most important Northern Ontario institution, because it has taken the time to listen, to care, to celebrate, and to respect the unique people who live in this part of the world. The school isn’t perfect, and there’s much to do, but it is trusted.

I hope, in a few years, someone in our Ministry of Global Affairs will be tasked with finding Roger somewhere in the outback of Australia to inform him he has been nominated to be a member of the Order of Canada for his groundbreaking leadership in bringing health and hope to a region that needed it and is thankful for his time with us.

They will fly more than 20 hours and drive a considerable distance on a dusty road to find him, but there will be an audience and he will be gracious.