I once talked to a seasoned geologist about a bird in the North that can fly upside down. He had spent a lot of time trekking up North in his life and commented that he had “never seen such a thing.
Feb 23, 2015 9:19 PM By: Chris Blomme 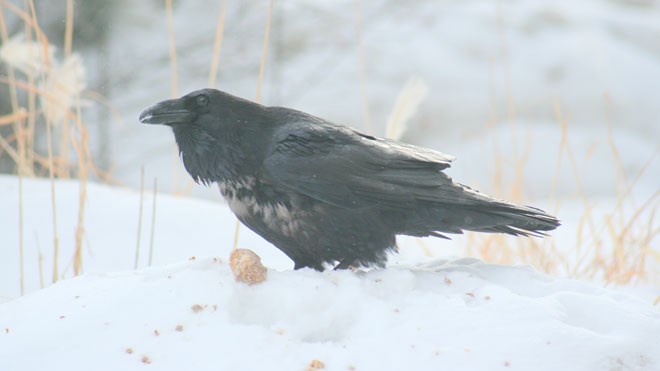 This time of year, ravens will gather in flocks on a windy day and gently glide in the updraft as though to display their presence to the other members of the flock. Supplied photo.
I once talked to a seasoned geologist about a bird in the North that can fly upside down.

He had spent a lot of time trekking up North in his life and commented that he had “never seen such a thing.” Being a geologist, he may have been spending more time looking down than up, and I, being a birder, probably walked over gold nuggets while looking up.

This is the time of year when you have an opportunity to watch one of nature's most intelligent birds do their spring nuptials. Yes, spring nuptials; even when there is still much snow on the ground.

If you are leaving the office, or driving home, spending time on the snow machine, cross-country skiing or ice fishing, this bird can be seen competing with its own members for territory, a mate and status.

It is the large black, robust, common raven.

This time of year, ravens will gather in flocks on a windy day and gently glide in the updraft as though to display their presence to the other members of the flock. Other times, you will see two very stream-lined profiles flying close together hellbent for leather, as if to see who can lead and who can keep up.

Experienced mated pairs will enhance their nests earlier in the year than new pairs. Nests and traditional sites can be reused depending on the location and success. The nests are quite large affairs and can be a nuisance when built near electrical transformers or other power line structures, as the people who work in these areas can attest to.

The nests are constructed of large twigs and sticks, particularly from our dead maples found commonly in the area. The lining of the nest is with much finer material and ungulate hairs from carcasses, string, twine and cedar bark all come in handy.

The survival of the young depends on a number of things, but food availability is always a factor. In a good year, five noisy young will reach fledgling size, but three young are quite common.

Like teenagers, the fledglings are adventurous and, as a result, vulnerable to mistakes before the consequences are learned. It is at this stage that road kills and collisions with guy wires resulting in wing injury reduce the population.

Experienced adults are rarely hit by vehicles as they appear to know just the upper limits to staying out of harm’s way. Drivers may have casually noticed this as feeding adults leave the road kills just as you are approaching.

This brings us back to the upside down flight story.

Birds of a mated pair or potential mated pairs will do flight displays. If you watch carefully, you can see a bird in straight flight flip over and fly briefly in an upside down display. They lose altitude quickly and sometimes, like gravity enhanced human free fallers, it looks like they wait to the last second as the ground approaches to pull out of the position.

Take some time to watch the ravens this month.

Chris Blomme is an executive member of the Sudbury Ornithological Society and works with animals at Laurentian University. If you have a question for Chris, send it to editor@northernlife.ca.

The Birdman: This has been a great winter for spotting snowy owls
Feb 27, 2018 3:04 PM
Comments
We welcome your feedback and encourage you to share your thoughts. We ask that you be respectful of others and their points of view, refrain from personal attacks and stay on topic. To learn about our commenting policies and how we moderate, please read our Community Guidelines.