Column: More than you ever wanted to know about tent caterpillars

Yes, they’re a nuisance in peak years but the critters are also a fascinating denizen of our northern forest, says The Birdman
Jun 29, 2017 8:00 PM By: Chris Blomme 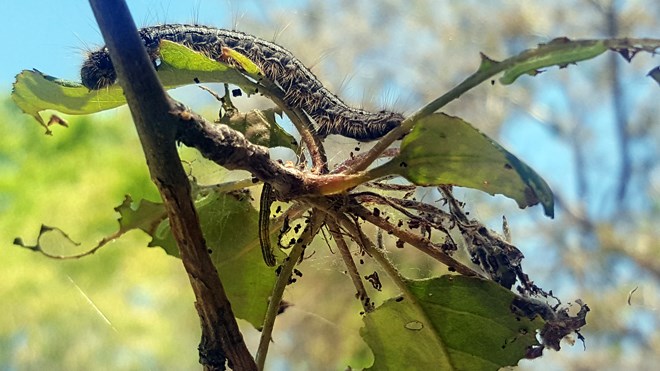 Earlier last week there was an interview on a local radio station with Greater Sudbury’s entomologist, Jennifer Babin-Fenske, and a number of other local insect scientists.

The theme of the story related to the inundation of the Eastern and forest tent caterpillars in the Greater Sudbury area; a preferred site in part due to the lack of plant diversity here, but also in part due to availability of host plants such as trembling aspen, wild cherries and poplars.

The invasion of our area by these tent caterpillars is cyclic and in peak years the trees are almost laid bare by these hungry insects, the forest will rebound given a chance, and with good weather and rain.

In peak years you can walk along a trail, take a minute to pause and actually hear it rain frass, the correct name for the small black gifts that come out of the other end of the caterpillar as it munches on and processes the succulent greens of the leaf.

Another interesting behavior trait with the colonial caterpillars is that they respond to loud noises close to their group. During the interview it was suggested that you clap your hands, but if you have the nerve you can walk up to a group of them and yell really loudly. Be sure to look over your shoulder first to see that you will not be misinterpreted. The caterpillars will rear up on their hind appendages and start to wiggle, an apparent defense mechanism.

Forest and Eastern tent caterpillars are quite hairy and though this is a deterrent to some wildlife, species such as the red-eyed vireo, black-billed cuckoo and veery will consume the caterpillars as food.

The forest tent caterpillars craft a silken mat whereas the eastern tent caterpillar makes a tent for protection. Both species work as gregarious groups and will pupate around the same time. This helps co-ordinate the development of the life stages. As you read this article, the caterpillars are now close to full grown and start to wander, looking for a cocoon site.

Cocoons look like silky yellow or white chambers containing the pupa and can be found in many strange places. Leaf curls, attachments to ground vegetation, under boards and locations all the way up into the canopy are not unusual. The emergence of the adult red brown moths will occur soon after.

The moths can be seen in large numbers during peak years. Lights left on in the back porch at night, or early morning gas fill ups (because the station is lit up at night) will make you well aware of their presence. Moths are readily eaten by a number of birds during this period in time as well. The moths with the larger more feathered looking antennae are the males and these antennae are used to locate the females.

Mating then occurs and eggs are laid in the form of a small beautiful bracelet around the twigs of the host plant. The eggs over winter and will hatch in the spring of next year if conditions are right, to start the cycle again. If you are really good you can snip off these egg bands from your favourite crab apple tree at this time.

While listening to the radio broadcast I was lying down on the couch looking at the large picture window of the camp. Jennifer Babin-Fenske had mentioned the “friendly” fly that is a natural controller of the tent caterpillar.

By chance I had one of these “friendly” flies trapped in the camp. It had been there all morning and was doing the typical trapped insect routine. It would walk along the wooden edge of the window down the length using its mouth parts to gauge the area. “Friendly” flies are like over grown house flies with a grey striped body.

At one point it came across a much smaller black fly walking in the opposite direction, touched it once then walked around it. I decided that the fly had been trapped for long enough so I tried a small experiment.

What would it do if I put a droplet of beer just in front of where it was going and watched what happens. Sure enough, like a true northerner, as it approached the droplet the mouth part became quickly active and it started to drink.

Now, in order for this to be a true experiment it was necessary to repeat it to see if the same behaviour would occur. The original droplet was gone fairly quickly so I place another droplet behind the fly and about four centimeters away.

When the fly turned to begin its walk back down the window frame, sure enough it came to the second droplet and started to lap it up. It did not resume its walk until all the fluid was gone.

Such a devoted fly should not go unrewarded. Gently, I used a glass and a card to capture the individual and released it outside. As to the brand of beer, my editor suggests we leave the name out.

Chris Blomme is an executive member of the Sudbury Ornithological Society and works with animals at Laurentian University. Have a question for Chris? Send it to editor@sudbury.com.