The Birdman: There's something a little 'fowl' about spring

Male mallards in full regalia as they try to impress females in hopes of courting them
Apr 2, 2018 1:00 PM By: Chris Blomme 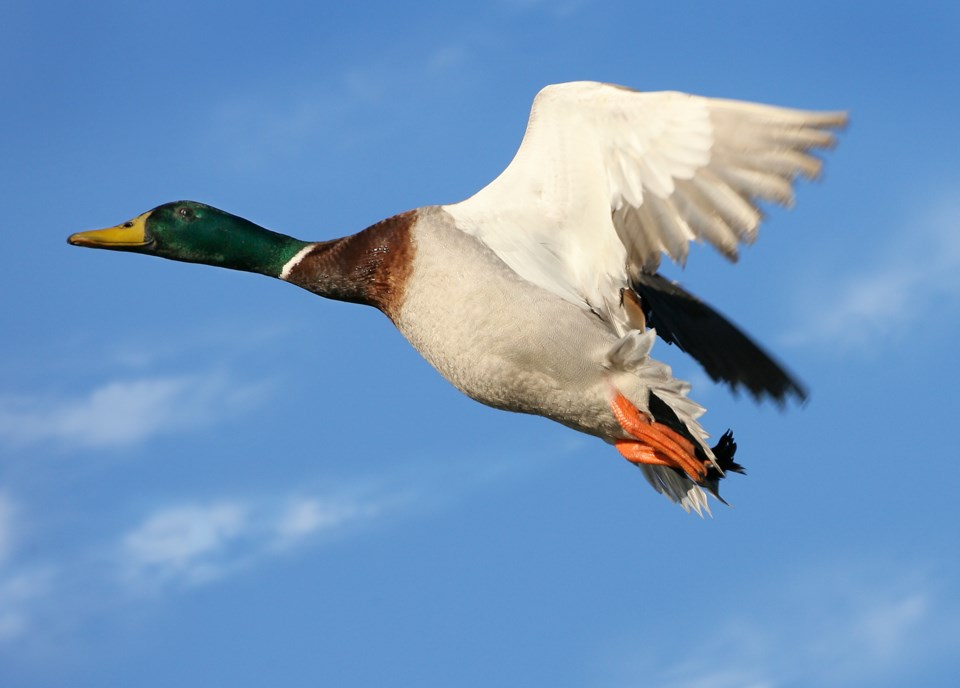 The male mallards are in their full regalia with emerald green heads that glisten in the light. The greyish wings have a region on the secondaries called the speculum. This is an iridescent patch of colour that also glistens in the light. (Supplied)

It is March 20, the first day of spring.

We have had three days of almost 100 per cent cloudless, blue skies, and with that, an associated cold spell not too familiar with this time of year, but you never will know. There are signs of spring though.
The winter has asymptoted and we can only look forward to an eventual warmer spell and a change in the landscape.

Water is starting to open along rivers and streams and particularly deltas where water is entering or exiting the larger bodies of water. The uniqueness of Junction Creek allows for some waterfowl to spend the winter here. The water stays open.

Spring is setting them off into different behaviours. Courting is perhaps the more obvious. The male mallards are in their full regalia with emerald green heads that glisten in the light. The greyish wings have a region on the secondaries called the speculum. This is an iridescent patch of colour that also glistens in the light. Both male and female mallards have these patches of iridescent blue bordered on the top and bottom by a white strip for greater contrast. Many of the puddler ducks have speculums.

Another common bird that over winters here is called the American black duck.  A close cousin of the mallard, some of these birds have been known to take on mates of the opposite sex with some interesting hybrids arising. It seems that the mallard traits however are more dominant. The American black duck has a purple-blue speculum which has no white borders. Mallards and American black ducks are the same size. American black ducks, as the name infers, are dark in plumage. In flight, the underside of the wings are almost straight white, giving a strong contrast to the rest of the bird. Mallards are lighter toned, throughout.

During the Greater Sudbury 2017 Christmas bird count, the single day event resulted in a mallard count of 545 individuals and an American black duck count of 29. This gives the reader an idea of just how many ducks overwinter in the Sudbury area. At some locations within the city limits, people have provided food in the form of grain, mixed seed, particularly corn. This diet supplements or may in fact be their primary food source during the winter.

The birds get an advantage in that they do not have to migrate large distances in spring to get to the breeding grounds. They are disadvantaged in that they have to survive the harsh winter and be in good form during the spring. Concentrated populations of birds also set off a concentrated predation opportunity for some predators.

Sudbury has another unique trait. The Arctic gyrfalcon will sometimes take residency in the area to feed on the local population of rock pigeon and ducks. This year, a white gyrfalcon frequented the area. Other predators include resident bald eagles, something unheard of until around 1996, mink, otter, red fox and brush wolf (coyote).

Getting back to spring, the mallards will be competing for the females and courting so that next season’s recruitment is assured. Males are only interested in courting. Mom will eventually make a nest as far as a mile (1.6 km) away from land, lay a large clutch of eggs, incubate and then hatch the eggs over a period of about 28 days. It is during this time that there are all kinds of stories about female mallards leading a brood of small ducklings across roads, highways, or marching through unusual places. They are trying to get to safe water. But that is another story.

Remember it is spring, so Look Up!

Chris Blomme is an executive member of the Sudbury Ornithological Society and works with animals at Laurentian University. Have a question for Chris? Send it to editor@northernlife.ca.