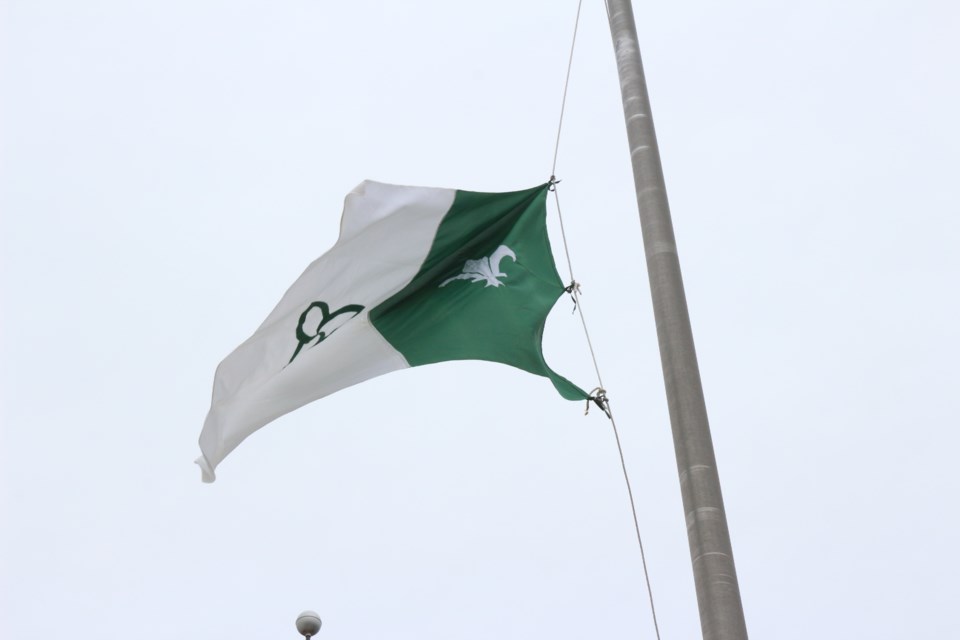 The Franco-Ontarian flag was first raised at the University of Sudbury in 1975. (File)

Surrounded by a crowd of nearly 200 people, Michel Dupuis carefully and proudly raised a new flag at the University of Sudbury on Sept. 25, 1975.

As the banner was lifted to the top of the pole, it fluttered in the wind, displaying its brilliant green and white bands. The colours represented the summer and winter seasons respectively, a nod to Ontario’s climate.

Within the green hoist, a lily called to the French-speaking community, while the white fly included a trillium, the floral emblem of the province. Together, these parts formed the Franco-Ontarian flag.

Today, it floats on nearly every institution in the province and has become synonymous with Ontario’s Francophone population, but this wasn’t always the case. When the flag was first raised, there was much mystery surrounding its creation. While the press covered the historic ceremony at the University of Sudbury, on campus at Laurentian University, the public was still unaware of the flag’s progenitors. Newspapers simply referred to the culminating effort as the result of “an unidentified group.”

In reality, one of the project’s founders was actually standing right in front of them. Michel Dupuis, who had raised the banner, was a second-year political science student at Laurentian and had clandestinely conceptualized the flag with Gaétan Gervais, a professor in the Department of History. After Gervais and Dupuis completed their design, Jacline England, a student and administrative assistant working at the university, stitched it together by hand.

Even as the flag increased in popularity over time, its origin remained murky as both Gervais and Dupuis refused to take credit for their work. Guy Gaudreau, who had rubbed shoulders with Gaétan’s in the Department of History for years, noted in 2005 that it took him 15 years to realize that his colleague was its creator.

Although the duo declined any recognition, they tirelessly promoted its adoption in the Francophone community as members of the Comité du drapeau, which also included Yves Tassé, Donald Obonsawin and Normand Rainville. The work of the community paid off, as the flag has become ubiquitous throughout the province, flying on masts alongside the Ontario and Canadian flags.

While the Franco-Ontarian standard has become an accepted part of the provincial skyline today, its history is filled with episodes of resistance to the banner. After it was first raised, letters filtered into the Sudbury Star from readers who took umbrage with its appearance. One complainant wrote, “If Franco-Ontarians feel in need of their own individual flag, why not another (with lions, of course) for the Anglos? How about a trillium matched with a trident for the Ukrainian-Canadians of these parts?”

Others felt that, with the rising tide of nationalism in Québec, the flag was a divisive symbol that had no place in Ontario. In other instances, silence spoke louder than words. Ironically, Laurentian University, the site of the flag’s first raising, did not begin permanently floating it until 1982. Moreover, it took the provincial government until 2001 before it officially recognized it as an emblem of the Francophone community in Ontario.

Even more recently, readers should remember that Tom Davies Square only reluctantly adopted the Franco-Ontarian flag in the last decade.

In 2003, after Laurentian students Stephanie St. Pierre and Tina Desabarais noticed its glaring absence, they gathered the signatures of 15,000 people and brought a petition to the City of Greater Sudbury. Within council chambers, the matter was taken to a vote where it was narrowly defeated.

Councillors such as the late Dave Kilgour had concerns that flying the flag would antagonize other groups in the community.

“I am afraid that by flying a flag that depicts the strength of one of our many cultures against some of the other ones that we have, that we may be putting in a wedge that would cause some animosity,” he said.

But for the city’s Francophones, the council’s reservations were misplaced.  According to a recent conversation with Serge Miville, professor and research chair in Franco-Ontarian History at Laurentian University, “Franco-Ontarians, and French-Canadians for that matter, have never viewed themselves as an ethnic minority, but as a national minority or as a petite société.

“The flag was meant to mark the existence of a centuries-old community, which dated from the early 18th century, and mark that this group was indeed rooted in the territory as a distinct, but active community in Canadian society.”

Three years later, when John Rodriguez was elected mayor, one of his first orders of business was raising the Franco-Ontarian flag, where it has flown every day since. While the mayor’s move was welcomed by many, it was not without its detractors. Some took issue with Rodriguez’s unilateral “shoot-from-the-hip” approach, while other councillors, such as Ted Callaghan, reported that he received telephone calls from his constituents who objected to the flag being raised at city hall.

Yet, the flag was never meant to divide people. It was meant to bring them together. During the fight to create a French high school in Penetanguishene that was opposed by the Simcoe District School Board and the campaign to save Montfort hospital in Ottawa, the only French-language university hospital west of Québec, the Franco-Ontarian flag figured prominently as a rallying cry and a symbol of hope and perseverance within the Francophone community.

In reflecting on it years later, Gervais noted that the impetus behind creating the flag was rooted in the importance of symbols in creating an identity.

“Today, the flag has taken on a different role and meaning. It continues to be a symbol of Franco-Ontarian identity, but it also reminds everyone of our French heritage. The flag has made an impact, not because it was seen as an extension of the Francophone population in Québec, or as a distinct minority group in Ontario, but as somewhere in between. In waving the flag, we are reminded of our past and united to keep that tradition alive.”

As Gervais continued his career in Sudbury, he pioneered work in Franco-Ontarian studies and was responsible for founding organizations that were dedicated to strengthening the Franco-Ontarian identity. For his efforts, Gervais received the Order of Canada in 2013.

The tradition that Gervais and Dupuis inaugurated 42 years ago, is still alive and well.

“It is a sentiment of belonging and of coming together as a community. If you look at how far we’ve come, more and more schools are raising the flag, same with city halls. It gives everyone a chance to come together and celebrate,” she told Sudbury.com.

Today, there are upwards of 612,000 Francophone people living in Ontario, making it Canada’s largest Francophone community outside of Québec. While the community is rich in heritage and diversity, owing to the fact that it traces its roots in the province back more than four centuries, the flag is a unifying symbol.

“Without a doubt, the Franco-Ontarian flag is the most prominent symbol of Ontario’s Francophone community. As of today, it is absolutely impossible to separate the community from the flag,” said Miville.

As we raise the Franco-Ontarian flag today in ceremonies across the province, it’s no coincidence that Sept. 25 is also officially recognized as Franco-Ontarian Day. Not only does it pay tribute to the anniversary of the first raising of the banner, but it also gives us further cause to celebrate the vibrancy and history of this important community.

How are you celebrating Franco-Ontarian Day? Leave us a comment below.

More #Canada150 Moments from this month:

September 5, 1945: Carrying a sheath of secret documents, cipher clerk Igor Gouzenko defected from the Soviet embassy in Ottawa. He claimed he had proof of Soviet espionage in North America. While he was not initially taken seriously by the authorities, he and his family were eventually taken into protective custody, where he revealed the existence of a Soviet spy network in Canada and the United States. In many ways, Gouzenko’s revelations ignited the Cold War.

September 9, 1954: When 16-year-old Marilyn Bell hopped in the waters of Lake Ontario in Youngstown, New York, she didn’t come out until she reached Toronto. In just under 21 hours, Bell had swum 51.5 kilometers, becoming the first person to swim across Lake Ontario. It was no easy dip. Besides fighting off exhaustion, Bell also had to combat lampreys and oil slicks.

September 10, 1939: One week after Great Britain declared war on Nazi Germany, Canada did the same. The belated entry into the Second World War was symbolic of the newly acquired sovereignty that Canada had been granted eight years earlier through the passage of the Statute of Westminster. Keen to exercise this newfound autonomy, Prime Minister Mackenzie King summoned Parliament a week later, where it voted practically unanimously to declare war.

September 21, 1995: Canadian currency was forever changed, on this day in 1995, when the Royal Canadian Mint introduced a $2 coin. While it has become affectionately known as the “toonie,” both changing our vernacular and our pockets, there were other names in the running. Some wanted it be called a deuce or doozie, while some wanted to call it a “moonie” because the coin featured Queen Elizabeth “with a bear behind.” Probably for the best that we went with toonie.

#Canada150: The deadliest fire in Canada’s history was in Northern Ontario
Jul 28, 2017 11:59 AM
Comments
We welcome your feedback and encourage you to share your thoughts. We ask that you be respectful of others and their points of view, refrain from personal attacks and stay on topic. To learn about our commenting policies and how we moderate, please read our Community Guidelines.