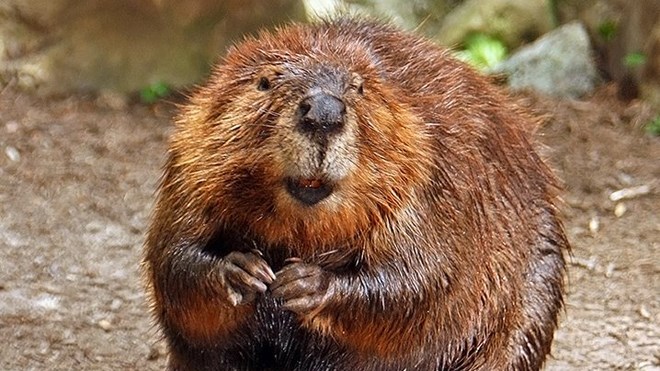 On March 24, 1975, the beaver became one of Canada’s official emblems. Steve from Washington, DC/Flickr

On this day in Canadian history, in 1975, the beaver was given official status as an emblem of Canada. Initially tabled by Sean O’Sullivan as part of a private member’s bill, the campaign to make the beaver a national symbol on par with the maple leaf, came to fruition 41 years ago today when it received royal assent.

The Anaheim Ducks have not won a game in Toronto since 21 October 2008 — wait, that can’t be right. Are you sure it’s not the other way around?

Nope, I double checked, the Ducks have lost three straight at the Air Canada Centre, including a 6-2 loss last season. Interestingly, of the nine different Leafs players who registered points in that game, only one of them, Nazem Kadri, could be in the lineup tonight. The others were either traded, not re-signed, or are on the shelf due to injury.

With less than ten games remaining, the Red Wings are facing the distinct possibility that they may miss the playoffs for the first time in 25 years. Since the 1991 postseason, Detroit has played in 298 playoff games and won the Stanley Cup four times.

But if the Wings fail to qualify for the playoffs this year, perhaps this isn’t necessarily the worst thing in the world? It would give some of the team’s older core players some much needed rest and finishing lower than 16th overall could give Detroit the opportunity to draft within the top ten for the first time since 1991.

Given the fact that the Kings, Sharks, Stars, Penguins, and Oilers are all playing tonight, this matchup may fly under your radar. Despite the NHL’s full slate of offerings this evening, it will still make for an interesting tilt, particularly as the Predators look to continue making space between themselves and the Avalanche.

In their last ten visits to Nashville, since 2009-10, Vancouver is 7-3-0, but the games have been much closer than the record appears. Two of those Canucks wins were decided in shootouts and their regulation goal differential was only separated by two tallies.

Beavers are nearly ubiquitous throughout the state of Minnesota, with the Department of Natural Resources estimates that there are 0.6 beaver colonies per river mile. This is certainly fitting for the Wild, whose team logo is so ambiguous that many still debate which animal it is mean to represent.

Some say bear, but it’s not entirely outside the realm of possibility that it is a hybridized beaver. The Flames will do their best to pry the Wild from their lodges, but they will have their work cut out for them as Minnesota continues to make a push for the postseason. Meanwhile, Calgary has lost their last four straight visits at the Xcel Energy Center.

You’re not likely to find any rodents in this matchup, save for Milan Lucic’s agitation skills, but it’s worth noting that the Kings all-time leading scorer, Marcel Dionne, was nicknamed the “Little Beaver.”

Apparently, Dionne earned the moniker in junior from a teammate who thought his stature resembled 1970s dwarf wrestler, Lionel Giroux, who was known as the Little Beaver. At 5-8, Dionne may have been short by NHL standards, but he was not exactly diminutive.

Nevertheless, despite the perceived height disadvantage, Dionne had eight 100+ point seasons in the NHL and racked up 731 goals and 1040 assists throughout his career, good enough for sixth on the league’s all-time scoring list. Expect the Kings to channel the “Little Beaver” and gnaw into the Jets tonight.

After recovering from a clavicle injury early in the season, Connor McDavid made a remarkable return and has 42 points in thirty-nine games.

Despite putting up the second most points (30) since the All-Star break, behind only Sidney Crosby (35), the consensus seems to be that the young phenom hasn’t played enough games to make a serious case for the Calder Trophy (Rookie of the Year).

Sure, he’s played thirty games less than front runner, Artemi Panarin, but he is the only rookie producing a point per game. His clip of 1.08 PPG actually gives McDavid the fourth highest points per game rate amongst all Calder nominated forwards since the 2004-05 lockout. Put another way, if McDavid played a full 82-game season, he’d be on pace for 88 points, which would put him head and shoulders above his peers.

While many Canadians proudly look to the beaver as an emblematic symbol worthy of reverie, it has not been without controversy. In 2011, Senator Nicole Eaton referred to the beaver as a “dentally defective rat” and petitioned Ottawa to replace our buck-toothed mascot with the polar bear.

For her, the polar is a stronger, more majestic and brave animal. There’s probably a case to be made that polar bears are more majestic than beavers, North America’s largest rodents, but when it comes to bravery, polar bears are the largest land carnivores in the world, so it’s easy to be brave when you’re the biggest one on the block.

And while you’re more likely to see hockey teams named after bears rather than beavers, the latter’s tenacity and hardworking nature are characteristics worthy of emulation both on and off the ice.

*Photo from Steve from Washington, DC/Flickr