History ‘n’ Hockey: “Hello out there, we’re on the air”

On this day in Canadian history, the CBC began its international broadcasting service on Feb. 25, 1945. The inaugural address was certainly not lacking any political clout.
0
Feb 25, 2016 4:11 PM By: Mike Commito 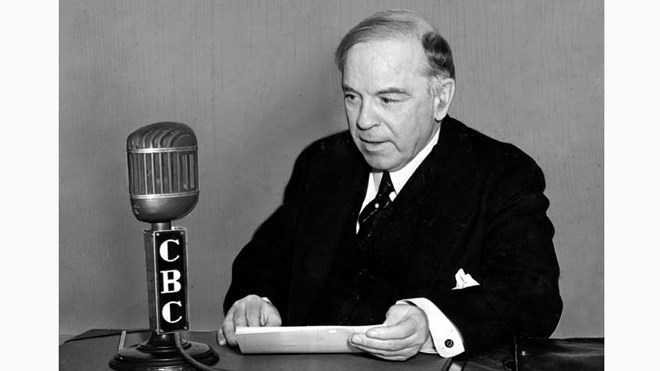 The inaugural address was certainly not lacking any political clout. The first words were spoken by Prime Minister William Lyon Mackenzie King, who was also joined by Minister of Justice Louis St. Laurent who addressed listeners in French.

With the Second World War still raging, King’s opening remarks certainly would have struck a chord, as he noted that the international broadcasting service was established and prepared for “Canadians on active service abroad.”

The NHL’s trade deadline looms large this Monday, but the Leafs have been quick to get ahead of the market. Earlier this week they traded Shawn Matthias, Nick Spaling, and Roman Polak for minor league talent and future draft picks. But don’t expect the Toronto brass to call it quits just yet. They will likely try to move P.A. Parenteau and one of their goaltenders as their race to the bottom of the standings. While some fans may welcome the team’s quest for the lottery pick, Leafs hockey will only get uglier down the stretch as the squad becomes of husk of its earlier iterations, which isn’t saying much. Carolina, who are 6-3-1 in their last ten trips to the ACC, will look to take advantage of the situation tonight.

Tonight’s meeting caps off a home-and-home series between the Jets and Stars. Dallas has already earned the season series victory and after defeating the Jets on Tuesday night, the Stars will be looking for the sweep at home this evening. With Winnipeg’s season all but nearly over, they will look to steal one in Dallas. In their last five visits to the Lone Star State, they are a respectable 3-2-0 and have given the Stars more trouble than franchise predecessor, the Atlanta Thrashers. Before the failed Sunbelt team relocated to the Manitoba capital, they had only picked up one victory in Dallas over the course of seven meetings from 1999 to 2011.

The Islanders don’t spend much time in southern Alberta. Since the 2004-05 lockout, they’ve only made the trip five times and are 2-2-1 in those matchups. Those games were certainly nowhere near as memorable as the contest played between the two on this day 35 years ago. In that game, Calgary scored 11 goals to rout New York 11-4. While you’d think this would probably be the team record for most goals in a single game, the Flames actually scored 13 at home against the Sharks on Feb. 10, 1993.

There’s been a lot of talk about Erik Karlsson recently, myself included, and for good reason. The Ottawa captain is close to becoming the first defenceman to reach 90 points since Ray Bourque in 1993-94 and may even finish top three in scoring, a feat that hasn’t been done by a blueliner since Paul Coffey in 1985-86. While Karlsson is probably poised to capture his third Norris Trophy, he should also be in consideration for the Hart as he has unquestionably been the best player on his team this season, and perhaps, the NHL. Just look at how he compares to the Vancouver’s entire defence corps. With 11 goals and 54 assists, Karlsson has 45 more points than the Canucks highest-scoring blue liner, Alex Edler, who is currently out for another five weeks with a fractured fibula. Otherwise, the six Vancouver defenceman who dressed in the team’s last game on Sunday have a combined 59 points, still six shy of Karlsson’s season total thus far.

It’s 2024. An emotional Connor McDavid is trying to hold back tears while he adjusts a microphone in front of him; his Stanley Cup ring faintly shimmers as his hands tremble. He gently dabs his eyes with a tissue and laments, “I promised Ebs I wouldn’t do this.” Bound for Los Angeles, McDavid is leaving behind a multi-championship team, but is optimistic he will help his new club return to glory. Although the Kings won their third Stanley Cup in 2017, they’ve since struggled to find playoff success and have not made the post-season since they were swept by the Toronto Maple Leafs in the 2020 Stanley Cup Final. Los Angeles, clearly the losers in last season’s now infamous Adrian Kempe trade, are hopeful McDavid’s arrival will ease the team’s transition next year, as franchise centre Anze Kopitar is expected to retire at the end of the regular season.

The antecedents of the CBC can be traced back to the Royal Commission on Radio Broadcasting or simply, the Aird Commission.

When it released its findings in 1929, the commission concluded that public broadcasting would help unite Canadians. This recommendation led to the establishment of the Canadian Radio Broadcasting Corporation in 1932, which was disbanded in favour of the CBC in 1936.

As part of the inaugural international broadcast, Prime Minister King certainly understood the history he was a part of and openly acknowledged that in his remarks. Moreover, as someone who loved radio, it probably delighted him to be a part of the first transmission.

King was not the only Canadian politician to have a personal affinity for the medium. C.D. Howe, a.k.a. the Minister of Everything, loved tuning in for hockey games. According to Dr. Sean Graham, a post-doctoral fellow at Harvard University, Howe even tried to use his influence in Ottawa to get the CBC to air more games from Fort William (now Thunder Bay) so he could keep up with his local team while away on Parliament Hill.